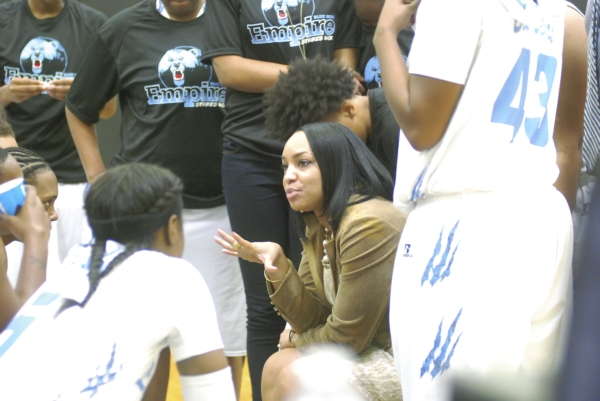 Like Livingstone, Columbus State is a NCAA Division II program. CSU is a member of the Peach Belt Conference and was 25-6 last season and earned a regional appearance.

Howard went 41-14 at Livingstone during her two years at the helm. The Blue Bears reached the CIAA Tournament semifinals in both of her two seasons at the institution.

Overall, Howard has amassed a 79-30 record in her four years as head coach, having served at NCAA Division III Salem College (2012-2014), prior to her hiring at Livingstone.

“We would like to thank Coach Howard for her leadership to the women’s basketball program and wish her much success in her future endeavors,” Springs said.

Springs added that a national search will begin immediately for Howard’s replacement.

According to the CSU website, Reeser said: “I am pleased to attract a rising star in the basketball coaching profession in Anita Howard to lead our highly successful women’s basketball program. Anita brings a passion for people and coaching, and her proven ability to recruit and develop young women for success, on and off the court, makes her the perfect choice to lead our program forward.”

“I am thrilled to be the new head coach of the Columbus State University women’s basketball program,” Howard said. “Columbus State has a long tradition of success and it is my goal to take that success to the next level.”

Howard arrived at Livingstone in the fall of 2014 and the Blue Bears immediately took off.

Unofficially, Livingstone was 26-2 that season, and won a school-record 23 consecutive games, but an an eligibility violation concerning one of the players resulted in the nullification of 18 games.

While neither the NCAA nor the CIAA recognizes forfeits as an official result of a contest, the nullifications did slow down the Blue Bears’ momentum.

Suddenly, Livingstone was a No. 3 seed in the CIAA Tournament and the Blue Bears had to win the event in order to advance to the NCAA regionals. However, a 57-55 loss to Lincoln in Charlotte ended the season.

Livingstone finished 15-12 and avenged the 2015 loss to Lincoln by beating the Lions, 50-45, in the CIAA Tournament first round. The season ended in the semifinals, losing to eventual CIAA and region champ, Virginia Union.

Prior to her head coaching stints, Howard was an assistant coach at Winston-Salem State, Shaw and St. Augustine’s.

Howard was an outstanding player in college at Fort Valley State (Ga.), in 1998-2001, and one season at Armstrong State (Ga.). She was named the SIAC’s Defensive Player of the Year in all three seasons at FVSU and was part of two championship teams.

Howard helped Armstrong win the PBC title in 2003 with a 27-3 record, before graduating with a bachelor’s degree in fine arts design.

An Alabama native, Howard is married to Theo Howard. They have three children — Jason, Thallan and Theo II.