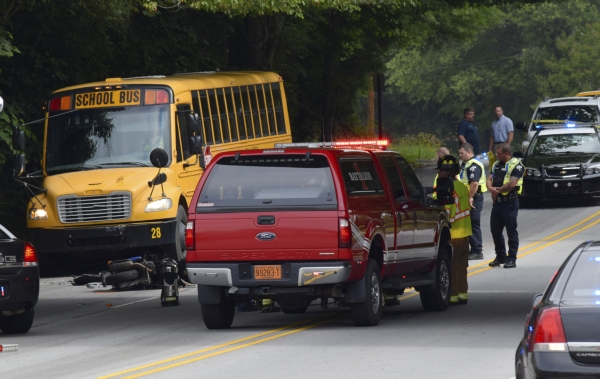 Traffic on West Innes was blocked for more than two hours after a fatal accident involving a school bus and a moped Thursday morning. No children were on the bus at the time. Rebecca Rider/Salisbury Post

SALISBURY — David Andrew Fondren, 54, died Thursday morning after his mo-ped collided with a school bus in the 1000 block of West Innes Street.

Salisbury Police released a statement Thursday afternoon that at 8:40 a.m. the Kannapolis man was traveling west when his Yamaha mo-ped crossed the center line, right into the bus’s path. Fondren was pronounced dead at the scene. Traffic was blocked in all lanes for several hours.

Witnesses said they saw Fondren fill up his tank at the gas station on the corner of West Innes and Institute streets, and then pull out onto the road. Witnesses said it looked like the Fondren “aimed right toward the bus.” Fondren was wearing a helmet, and speed did not appear to be a factor, police said.

Lydia Faust was driving to her sister’s house when she was stopped by traffic.

“I just seen the man lying on the ground and his body all twisted,” she said.

According to Faust, the bus driver, JoeLeslie Allison, 60, of Salisbury, had to be coaxed off the bus by police and she seemed “distraught.”

Rowan-Salisbury School System officials have confirmed that bus number 28 was returning from dropping off students when the accident occurred. No students were on the bus at the time, but a bus monitor was present.

Faust said her heart went out to the bus driver, and to the family of the person killed. Faust’s own son died in a fatal car accident three years back, and she keenly remembers what it’s like to receive news that a loved one has passed.

“When the fire trucks come, my heart dropped,” she said.

She hopes the family of the victim will be able to forgive the driver — accidents, even terrible ones, do happen. Recovering from tragedy is hard, she said, but she encouraged the family to stay strong.

“Keep your head up,” she said.

“We are very grateful to our staff and to all the emergency service personnel for their immediate response and assistance in today’s accident and extend our heartfelt concerns to all involved,” Foil said in an e-mailed statement.

Salisbury Police report that the case will be reviewed by the District Attorney’s office. There are no charges at this time.