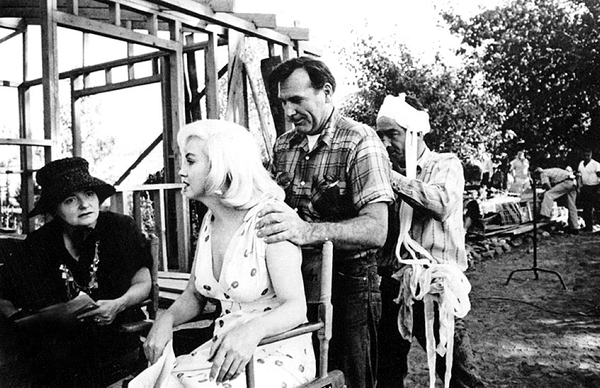 Ralph Roberts, third from left, massages Marilyn Monroe’s shoulders on the set of ‘The Misfits.’

Long gone: Who ended up with Marilyn’s Burberry trench coat?

SALISBURY — Hap Roberts has told the story many times — how he and cousin Claudette Roberts unknowingly gave away to Goodwill a Burberry trench coat that had once belonged to Marilyn Monroe.

Hap always has liked to envision some needy person walking around Salisbury, wrapped up snug and warm in that coat.

“Wouldn’t Marilyn and Ralph love that?” he asks.

“Ralph” is Ralph Roberts, Hap’s beloved uncle who died in 1999. A Salisbury native, Ralph Roberts was a war veteran, actor and, to supplement his acting income, a trained masseur.

Roberts became Monroe’s official masseur in 1959, and for the last three-plus years of her life, during her various romantic entanglements, Ralph would give her massages daily, becoming a close confidante and friend to Monroe.

Together, they ran errands, ate meals, attended parties and took plane trips across the country between New York and California.

Many accounts have suggested Roberts was the last person Monroe tried to contact the night she died of a drug overdose in Los Angeles.

But back to the Burberry trench coat. Hap Roberts recently learned a new chapter to its story. First, a little more background.

Toward the end of his life, Ralph Roberts returned to Salisbury and lived in a little house off Parkview Circle, not far from Hap’s offices with Statewide Title. They would meet every afternoon around 4 p.m. to talk, and every Sunday at 5 p.m. Ralph would show up at Hap and his wife Annette’s house for martinis.

Ralph Roberts always brought his Sunday New York Times with him and would leave the newspaper with the couple so they could read it later. Once, Roberts carried with him an art deco martini set Monroe had given him.

Roberts also possessed a box of chandelier crystals Monroe had collected. The actress thought the crystals carried healing properties, and in the years after her death, Ralph sometimes would hand them out as gifts to friends.

Ralph Roberts died April 30, 1999, at age 82. About a month later, Hap and his cousin Claudette began the somber task of cleaning up and going through their uncle’s house. They noticed a woman’s Burberry trench coat in the closet and figured it was a friend’s coat, left at Ralph’s house in the past.

They placed it in the things going to Goodwill.

About a month later, Hap found a list of Marilyn Monroe items Ralph had inventoried. On the list was “Burberry trench coat.”

Hap could only ease the heartache of having given away the coat by thinking to himself  that “at least it’s keeping somebody dry and warm and Ralph would like that.”

So we come to present day and a recent conversation Hap Roberts had with Charles Castillo, a playwright, author and actor living in Palm Springs, Calif. Castillo is the latest person writing a book about Monroe, and many times the research turns up the name of Ralph Roberts, which leads to nephew Hap in Salisbury.

Hap Roberts and his associate Steve Jacobs assisted Lois Banner on her book “Marilyn: The Passion and the Paradox.” They also were interviewed for a documentary on Monroe by French Connection Films.

Roberts has relied heavily on Steve Jacobs to establish a Ralph Roberts website and assist in “curating” his uncle’s stuff related to Monroe, including penned recollections he had titled “Mimosa.”

Castillo and Roberts talked for a couple of hours by telephone, and Roberts learned that the Academy of Motion Picture Arts and Sciences had in its possession recorded interviews with his uncle talking about Monroe.

And in those conversations, Ralph talks about how he came into possession of Monroe’s Burberry coat. On one of their trips together, Monroe took Ralph Roberts with her to the farmhouse she shared with playwright husband Arthur Miller.

She and Miller were estranged, and Monroe wanted to go to the house when he wasn’t there and secure some of her possessions.

When Monroe pulled her Burberry trench coat out of a closet, she smelled the perfume of another woman on the coat and became enraged, pitching it into the garbage. Ralph Roberts protested that such a fine coat shouldn’t be thrown away.

“”She said, ‘If you want it, take it,'” Hap said, replaying his conversation with Castillo. “Ralph went over and took it out of the trash can.”

So that’s how Ralph ended up with Marilyn’s coat, and that’s how it ended up in Salisbury. Sadly, it’s probably much too late to go Goodwill hunting.