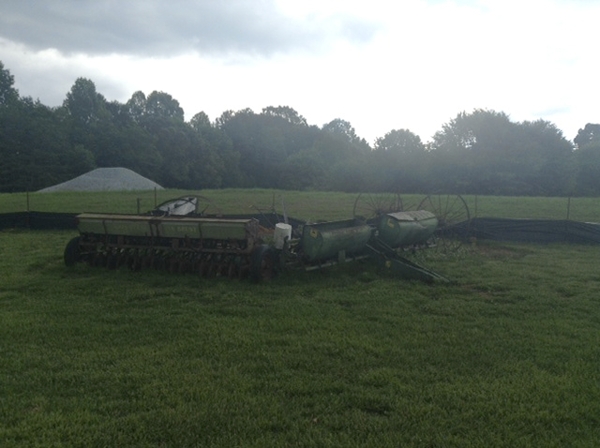 The building site for the new Country Life Museum with antique farm machinery in the foreground at Sloan Park. Photo by David Freeze

Grading is already complete and construction will begin soon on the new Country Life Museum at Sloan Park. A small army of volunteers finished grading and applied washed stone to the building pad and already has grass growing around the building site. The site of the museum is just inside the entrance to the park.

The purpose of the museum is to preserve, restore and demonstrate various aspects of the rural agricultural lifestyle of the past.

“The vision for the museum founders and builders is to educate the present and future generations about the rural way of life of the American farm family,” said Randy Elium of the Carolina Antique Power Association. “Work on the actual construction of the building is expected to begin within a few weeks.”

The Country Life Museum will be housed in a building 60 feet by 80 feet with a ceiling height of 16 feet. Although located in Rowan County, the museum will also serve the surrounding counties of Davie, Davidson, Iredell, Stanly, Cabarrus and Mecklenburg. The Carolina Antique Power Association, also known CAPA, has been planning this project since 1992. CAPA is a group of antique equipment enthusiasts who acquired nonprofit status from the IRS, allowing all donations to be tax deductible.

Originally formed as a group of local hobbyists who planned to help each other restore old equipment and to have fellowship with those of similar interests, one of the first projects of the club was a “Plow-in.”

“Members brought their own old plows and took turns plowing another member’s field,” Elium said. “We toured a property near Shelby where there was an extensive collection of old equipment. The group begin to talk about having our own place to meet and work on restoration projects, and soon the idea was born.”

Over the years since its inception, the club has held fundraisers to help those in the farming community who have experienced health crises. That fundraising success provided the basis for the current goal of completing the museum building.

The museum itself will house a variety of old farm equipment including all brands of tractors and implements. The interior of the building will be part metal siding and part wooden boards to allow for the display of small items from the rural agricultural lifestyle of bygone days. Part of one interior wall will be reserved for donor recognition, and some shelving will be installed to display heavier items. A screening committee will decide which items are on display and the timing of rotation so that the displays remain fresh with different items coming in. CAPA already has six antique tractors committed for donation and other items are ready for wall display.

The opening date for the museum will be based on the success of the fundraising campaign, which CAPA hopes will reach its goal during an upcoming fundraiser. Once the museum is opened, it will operate under park rules, and volunteers will also be screened with park regulations. A staff of knowledgeable volunteers will be on hand during museum operating hours.

“CAPA members have toured other antique equipment collections and gleaned ideas from a variety of sources to enhance our museum experience. Piedmont Research Station has indicated an interest in growing food plots near Sloan Park that will compare the performance of heirloom varieties to current crop strains,” said Elium.

“Fundraising so far has already brought in $120,000 that we expect to pay for the building shell. We estimate that it will take an additional $60,000 to complete the project, including a concrete floor,” said Elium. CAPA is organizing a major fundraiser for Sept. 10 at the building site.

“We plan to have 5-6 bluegrass bands and plenty of food,” Elium said. “The Millbridge Ruritans and several local churches will have a large variety of choices.”

Also planned are a yard sale, live auction, bake sale and a kiddie tractor pull. CAPA will sponsor a raffle that includes a new John Deere mower, a vintage John Deere 48-inch bench and a 35-quart Yeti cooler. Raffle tickets are available for purchase at a cost of $5 for one and $20 for five.

“Completion of the Country Life Museum will be the culmination of many hours of discussion, planning and work to establish this tribute to our past,” Elium said.

Monetary donations for the entire project are welcome at any time prior to or after the fundraiser event. Checks can be made to Carolina Antique Power Association. Call Elium at 704-213-2661 or Dewey Bryan at 704-738-3416 for more information.