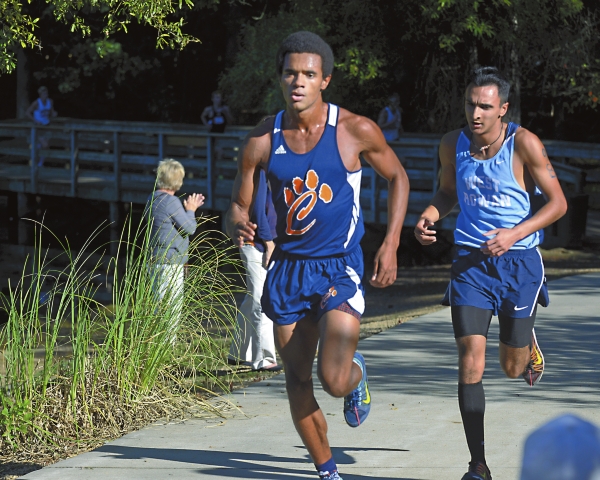 MOUNT ULLA — West Rowan’s Michael Anton puts every ounce of energy into his cross country and track and field efforts.
“I always tell my teammates that they’ve got to be ready to catch me at the end of a race or I’ll hit the track face first,” Anton said. “I’m not going to hold anything back.”
Anton signed recently with Brevard where he’ll compete in both sports. He plans an unusual double major — religious studies and exercise science.
His dream job would be to become a combination pastor/personal trainer.
“Being a pastor or chaplain has been a goal of mine for a long time, and that won’t change,” Anton said.
As far as athletics, Anton sees himself as a track man first.
During the 2016 indoor track season, Anton ran on West’s second-place 4×400 team in the 3A State Championships. He was 12th in the 500-meter run and he also competed on West’s 4×800 relay team. He won the sportsmanship award for the state meet.
In the outdoor season, Anton ran on a 4×800 team that was one of the best in school history. The Falcons were second in the Rowan County Championships to Carson and third in the South Piedmont Conference Championships.
Anton’s best individual outdoor track race is the 800. He placed fourth in the event in the Rowan County Championships and SPC Championships.
While his personal record in the 800 is 2:03.48, Anton propels himself even faster when he sprints a leg for West in the relays. In relays, he’s run 800s in 2:01s and 2:02s.
“They tell me I run faster with a baton in my hand,” Anton said. “In relays, you don’t want to let your teammates down.”
Prior to Anton’s junior year, West coach Scott Foster talked him into coming out for the cross country team. It was a way to stay in shape, and Anton turned out to be proficient at it.
He was all-county last fall, placing 10th in the Rowan County Championships.
The day of the 3A Midwest Regional in late October, Anton was stricken by illness, but he competed and ran 17:39, 14 seconds faster than his time in the county event.
“He was sick as a dog, but he still ran,” Foster said. “There was another meet I remember where he hurt his ankle, but he just wouldn’t stop. That’s a very tough kid. He runs with his heart as much as anyone we have. He runs until he has nothing left.”
Anton transferred to West from Davie County as a freshman.
Sports were a way for the new kid to make friends, and he’s become one of the more popular students in his class.
If there’s a prom court or a military ball court or a homecoming court — anything that is voted on — Anton is on it.
“It’s funny because I still look at myself as just a track nerd, a ROTC nerd,” Anton said. “But people at West have treated me so well. Coaches have treated me well. People have taken care of me.”
Anton made a swift march up the ranks in West’s ROTC program.
“I took the class at first to make an easy A, to tell you the truth,” Anton said. “But ROTC became a very big part of my life.”
Anton rose from private all the way to lieutenant colonel. He’s earned a prestigious Presidential Fitness Award.
“I was good in the fitness part of ROTC, and I was always good on the drill team,” Anton said. “Then I really got into the community service aspect of it, and I had 250 service hours as a senior. I marched with the color guard for football games and baseball Legion games. I represented ROTC at Boys State. I got to meet many veterans, and that was just a great experience.”
Anton wasn’t sure about his future school, but he was watching a movie one night, enjoying some rare down time, when he got a call from a Brevard coach. Brevard was looking for an 800 guy, and Anton’s cross country ability, his record of service, and his fine grades made him a perfect fit.
Anton will be getting a number of scholarships, including a substantial Leadership Scholarship.
“My mother taught me to respect everyone and to respond to the people who don’t like me with love and kindness,” Anton said. “A lot of things have worked out for me.”