Fishing in the rain 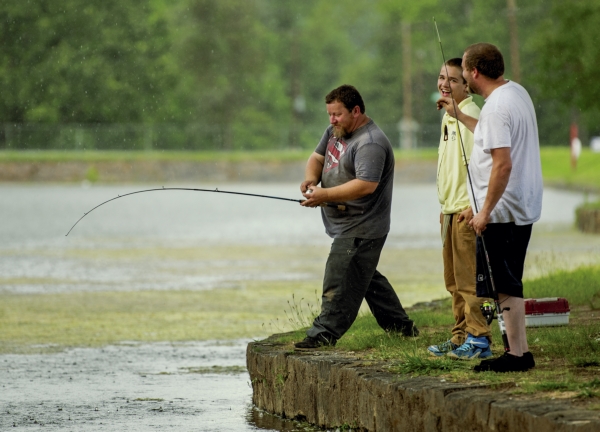 ALLISON LEE ISLEY/SALISBURY POST Dale Jones, of Salisbury, left to right, reels in his line while spending the afternoon fishing with his son, Alex Jones, 14, and friend, Jake Martin, at City Park's three-acre lake in Salisbury on Tuesday, May 31, 2016.

SALISBURY – What better time is there to go fishing than before a storm?  Late Tuesday afternoon was Dale Jones’ fifth fishing trip to City Park since discovering the 3-acre scenic lake just over a week ago while driving around.  Usually, Jones’ regular fishing spot is off of Goodman Lake Road, but he decided to spend the afternoon with his son, Alex Jones, 14, and friend, Jake Martin, at City Park.  After only an hour of fishing, the rain began falling, but that didn’t stop them from enjoying the day.  Jones loves fishing because it is the perfect way to make all of his worries go away and “to just sit back and relax.” ALLISON LEE ISLEY/SALISBURY POST Two ducks swim in the opposite direction in Salisbury on Tuesday, May 31, 2016.