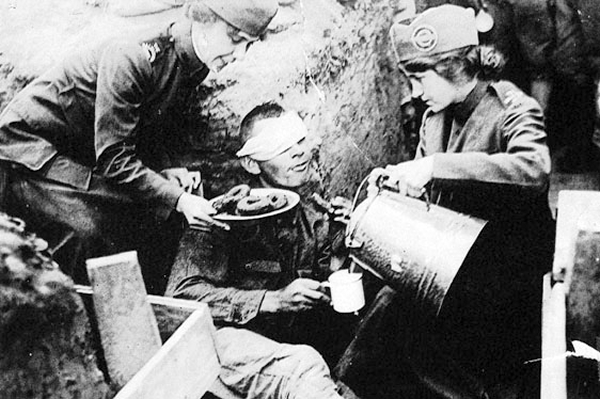 SALISBURY — Salvation Army “Doughnut Girls” will be stationed at Krispy Kreme in Salisbury Friday as part of National Doughnut Day, which will be helping to raise money for Salvation Army in Rowan County.

The Doughnut Girls, who are staff members of the Salvation Army, will be at the Krispy Kreme on West Innes Street starting at 7 a.m. Friday.

Held annually on the first Friday of June, Doughnut Day was established by the Salvation Army in 1938 to honor its “Doughnut Lassies,” who served doughnuts to soldiers during World War I.

The “Doughnut Lassies” are often credited with popularizing the doughnut in the United States when the troops returned home from war.

When America entered the hostilities in April 1917, National Commander Evangeline Booth placed the entire Salvation Army on a war-service basis.

Hostels and service centers were established adjacent to military camps, and when the American Expeditionary Force went to France, Lt. Col. William Barker was dispatched to see how the Army could best serve them.

In response to Barker’s request to “send over some lassies,” Booth dispatched a group of 11 hand-picked officers, including four single women, believing that quality mattered more than quantity.

More officers followed and Salvation Army huts, restrooms and hostels soon sprang up wherever the American troops were stationed, some right at the front line where the women as well as men were in danger from shells and gas.

In October 1917, ensigns Helen Purviance and Margaret Sheldon decided to lift the spirits of the troops by providing some real home cooking. With only flour, sugar, lard, baking powder, cinnamon and canned milk at their disposal, it was agreed that they would make and serve doughnuts.

The dough was patted into shape by hand and fried, seven at a time, in a small pan. The tempting fragrance of frying doughnuts drew the homesick soldiers to the hut, and they lined up in the rain waiting for a taste.

Although the ensigns worked late into the night, only 150 men were served. The next day the number was doubled and later, when fully equipped for the job, they served up to 9,000 doughnuts daily.

The soldiers cheered the doughnuts and soon referred to the Salvation Army lassies as “Doughnut Girls,” even when they baked apple pies or other treats.

The simple doughnut became a symbol of all the Salvation Army was doing to ease the hardships of the frontline fighting men. The American Expeditionary Force was nicknamed “The Doughboys,” and the Salvation Army soon became the most popular organization among the troops in France.

“Each year on National Doughnut Day, we encourage our customers to celebrate by coming in to get their favorite doughnut for free, but this year, we wanted to make the celebration even more meaningful,” said Tony Thompson, president and CEO of Krispy Kreme Doughnuts.

“As founders of National Doughnut Day, the Salvation Army is a natural partner. We’re excited to collect funds for the many initiatives they support, especially since all donations will go directly to the local communities.”

The Salvation Army celebrated the first National Doughnut Day in Chicago in 1938 to help raise funds during the Great Depression and commemorate the work of the “Doughnut Lassies.”

The Salvation Army still serves doughnuts, in addition to warm meals and hydration, to those in need during times of disaster.

Col. Ron Busroe, community relations and development secretary for the Salvation Army, said, “National Doughnut Day has become a true American tradition, but many don’t realize the historical significance of the day.

“The partnership with The Salvation Army and Krispy Kreme brings greater visibility to the importance of the day and the idea of helping those who may have fallen on hard times.

“With Krispy Kreme’s generous offer of a free doughnut, we hope everyone will extend that generosity by giving back to support their local community.”

Below are a few additional facts about the history of National Doughnut Day and the Salvation Army:

• With limited resources, and only able to fry seven at a time, the Salvation Army’s ensigns Margaret Sheldon and Adjutant Helen Purviance cleverly thought of frying donuts in soldiers’ helmets.