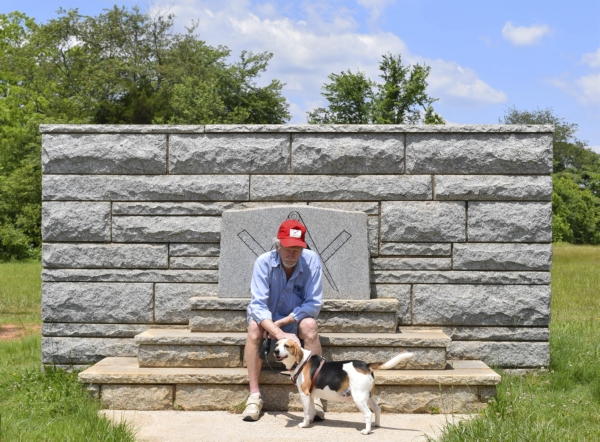 Bill Walter and his life partner, Sibbie Osborne, were together for 51 years. Now that she's gone, he visits her grave every day. Before he goes to the graveside, Walter says he sits here and thinks about her. Rebecca Rider/Salisbury Post

The Dart: ‘More than anything:’ one man remembers love and loss

CHINA GROVE — Every day, Bill Walter walks out to his driveway with his dog – a beagle named Snoopy – on a leash. He lets Snoopy pick the car, the Dodge Durango or a smaller four-door sedan, and they drive the five miles to West Lawn Memorial Park. He parks in front of a long sidewalk in a quiet and sunny corner of the cemetery and gets out. Snoopy always trots right up to Sibbie’s grave.

Walter and Sibbie Osborne met around 1960, when they both worked at the Corlin Dyehouse in Landis. Walter was 25 years old and a supervisor. She was a yarn peeler.

“I better not tell you the first thing,” he joked when asked what he thought of Sibbie, but said he was drawn in by her blond hair and “five-two, eyes of blue.” They started dating and  never stopped.

“It was just one of them things,” he said.

“This has bothered me more than anything,” he said.

Every morning, Walter goes to visit Sibbie’s grave. He sits on a stone monument set back against the pine trees and lets Snoopy roam. Sometimes the dog tangles his leash around stones or flower vases, knocking temporary memorials over. Walter rights them slowly, carefully.

He spends a lot of time looking at the sky, studying the weather. On this particular Sunday, the rain’s cleared out to reveal a bright blue sky. He said he spends the time thinking about Sibbie.

When asked what he liked best about her, he looked over at her grave, marked by a spray of bright purple and yellow artificial flowers.

Though Sibbie had children from a previous marriage, the couple never had their own – but their time together was full of laughter and adventure. They bought a big house in Mount Pleasant, and would drive down to Atlanta to see baseball games. Walter chuckles remembering that once they bought 25 miniature burgers and smuggled them into the stadium in purses and pockets.

Sibbie worked in the Corlin factory for another 20 or 30 years, but he only made it five before he took a better paying job which allowed him to retire early. In 2011, Walter and Sibbie bought a motorhome, invited her brother and sister-in-law along, and took off for a month-long tour of the country.

They’d planned to drive all the way across the country, up to Washington and then down the Pacific Coast Highway to San Francisco and Los Angeles. But the group never made it.

Walter said that on Sept. 10, 2011, they were at Mount Rushmore. And the next morning there was a travel advisory – avoid large cities, avoid national monuments.

“It was a bad time, back then, “ he remembered.

While he and Sibbie finally did get to visit California, Walter said they never did make it to Washington or Oregon. But they went other places. They went to Mexico, Puerto Rico, and drove out to the Grand Canyon.

They used to drive to Nashville to catch shows, and once got a chance to sing on the stage of the Grand Ole Opry.

“We still talked about that,” he said. “Even before she died, she remembered that.”

In the cemetery, he raises his hand by his head, still remembering.

By the time she was diagnosed with dementia, both of her hips and one knee had been replaced, and she used a walker to get around. One night she fell while going to the bathroom in the middle of the night.

“And she never got up again,” he said.

She spent the last part of her life bed-bound, before passing away in hospice care on Oct. 14, 2015.

And so he visits, every day. On nicer days, he’ll take a walk with Snoopy along the looping trails of the memorial park. The couple that drove out with them to Mount Rushmore is now buried in this same cemetery, and some days he’ll drop by and visit them. But mostly, he’s there for Sibbie.

After Snoopy finishes wandering, Walter puts him in the car and goes to stand by the grave. The grass on the plot is a little greener than its neighbors, and the head is marked by a temporary plaque and a vase for flowers. A full headstone is on order, but Walter is still making payments on it.

At the grave, he bends over to check that the plaque and the vase are secure, and tenderly brushes the artificial petals back from the nameplate.

When it’s just the two of them, Walter talks out loud, telling Sibbie about his life now – he’s still living in the double wide they bought when she had difficulty getting around, but he sold the motor home – or he talks about the weather, describing the day to her.

When asked why he thinks they were able to stay together for so long, Walter adjusts the flowers again, the gemmed centers flashing in the sun.

“Well she loved me, and I loved her. I guess that had a whole lot to do with it,” he said.