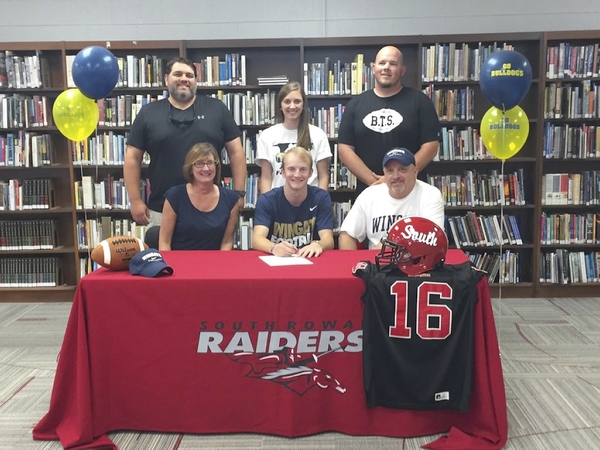 LANDIS — One of the best moments of the school year came for South Rowan’s Heath Barringer when he was only a spectator at the Easter baseball tournament in Kannapolis at Intimidators Stadium.
“I was walking to my car in the parking lot and a guy started yelling at me,” Barringer said. “I had no clue who he was, but he says, “Hey, you’re South’s quarterback, aren’t you? Hey, you’re tough. You’re a really tough kid.'”
Barringer thanked the stranger and kept walking.
“But I started thinking about it and that actually meant a lot coming from someone I didn’t know,” Barringer said. “It’s probably a bigger thing for someone to tell you that you’re tough than for someone to tell you that you’re great.”
Barringer was one of South’s best — and toughest — athletes, and he’ll continue his career with Wingate’s football program.
He’ll be on the team as a preferred walk-on, taking advantage of academic scholarships. He’ll have a chance to earn athletic scholarship money in years to come.
Barringer was recruited by several Division III schools. That looked like the most likely path for him because his sister, Nicole, graduated from South not long ago and did great things at D-III Averett. She was the 2015 USA South Conference Woman of the Year and a four-time member of the USA South all-academic team. She was all-region and honorable mention All-America as a volleyball setter.
“I looked at a lot of the D-IIIs, but I kind of like going to D-II because of the chance to get an athletic scholarship,” Barringer said.
Barringer and Wingate have maintained contact since he performed well in a camp there following his junior season.
Assistant coach Rashaan Jordan invited Barringer to a combination visit and workout after Barringer’s senior season was in the books. That trip also went smoothly.
“Wingate is close, they have a great campus and they have the communications and sports broadcasting major I was looking for,” Barringer said.
Barringer runs well (4.7 in the 40) and was a receiver early in his high school career. Injuries forced him to move to quarterback and more injuries made him the varsity quarterback not long after he’d started learning the ropes on the jayvees. That was in the fall of 2013.
“I’d been the jayvee quarterback for a few weeks my sophomore year when Aaron Kennerly, the varsity QB, got hurt,” Barringer said. “I was kind of thrown to the wolves not long after that.”
Barringer threw his first varsity pass in a 48-6 loss to Carson. He tossed his first two touchdown passes — to Eric Stowe and Matt Honeycutt — in the 61-26 loss to East Rowan that ended an 0-11 season.
Kennerly was injured again early in 2014 — the Week 2 game against A.L. Brown. Barringer threw five touchdown passes filling in until Kennerly’s shoulder injury healed. Two of those touchdowns came in South’s first victory at Northwest Cabarrus since 1996. Two more came in a 35-21 loss to Concord. South went 3-8.
Barringer was South’s starting quarterback from the start as a senior, although it was a season every bit as difficult as his sophomore year.
“It was kind of a tough ride,” Barringer said.
Salisbury’s D.J. Alexander threatened to break the world record for sacks against South on opening night, although Barringer walked away from that game in one piece. He also walked away from a flurry of A.L. Brown sacks in an ugly 67-0 loss in Week 2.
South nearly beat Northwest Cabarrus in Week 3, as Barringer broke scoring runs of 38 and 17 yards, but that painful 35-34 home loss helped send the season into a spiral.
Barringer took a pounding. He suffered a concussion in the West Rowan game in Week 5 and sat out the Cox Mill game the following week.
He returned to action for the Carson game, suffered a collarbone injury, but stayed in.
“No matter what the score was, I know Heath always fought for everything he could get,” South coach Daniel Yow said. “He’s a very competitive person, and he wasn’t coming out.”
Barringer finished the season with three rushing TDs and four passing TDs. South didn’t win any games on the field, although it recently received credit for a forfeit win over Salisbury.
South’s boys basketball season brought more of the same. Less physical punishment, but plenty of draining blowouts. Barringer, who was making a hoops comeback, helped the Raiders, but he couldn’t help them win any games.
“I’m still glad I played basketball,” Barringer said. “We gave it all we had.”
Barringer should be on the winning side a lot more at Wingate. The Bulldogs have a stable program under coach Joe Reich. They’re frequently contenders in the South Atlantic Conference, a strong D-II league that includes, among others, Catawba, Lenoir-Rhyne and Carson-Newman.
Yow played at Catawba, but his older brother, Josh, played at Wingate, so he’s familiar with Wingate. He believes the school fits Barringer.
“Right now, Heath throws more accurately on the run than from the pocket,” Yow said. “They’ve got knowledgeable quarterback coaches, and Heath will keep working and keep improving.”
Barringer, 6 feet, 170 pounds, expects to redshirt his first year, as he adds pounds and learns the offense, but he’s looking forward to the challenge of college football.
“All I need is an opportunity, and Wingate’s given me that opportunity,” Barringer said.