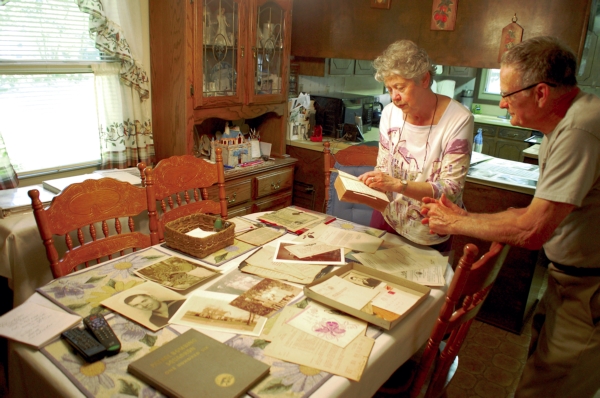 Mark Wineka/Salisbury Post Ann Brown Miller and her brother Andrew Brown look over all the photographs and documents their late mother had saved related to their oldest brother Leo Brown, who was killed when his bomber was shot down over the South China Sea just days before the end of World War II.

ROCKWELL — Mattie Josey Brown had the same dream every night, and she would tell her little daughter Ann about it while they sat at the breakfast table.

Mattie dreamt her oldest son, Leo, was still alive, floating on a piece of wreckage in the South China Sea.

When she wasn’t sleeping, Mattie also allowed herself to think maybe the Japanese had captured Leo and sent him off to one of their terrible work camps. Or could Leo have made it to a deserted island and survived there without anyone knowing where he was?

But Leo and the 11 other guys in his airship, presumably shot down by the Japanese July 30, 1945, were never found, nor was any sign of their aircraft.

What made it even tougher was that Leo’s plane, part of Patrol Bombing Squadron 106, went missing just days before the U.S. atomic bombs were dropped on Hiroshima and Nagasaki, essentially spelling an end to World War II.

“It really affected her the rest of her life,” Ann Brown Miller says today.

Ann vaguely remembers — she was 4 years old then — the day government strangers came to the house with news that Leo’s plane was missing.

“The car was different,” she says, recognizing that even a small child can tell when something is out of whack. Was the car a drab government green? Did it have some kind of official writing or insignia on the side?

Ann can’t say with certainty why she knew that car was ominous, as were the conversations inside the family’s farmhouse. “I just knew it affected Mama,” Ann says.

Mattie Brown waited six or seven years before she ordered a gravestone for Leo, and it was erected at his home church, Organ Lutheran, in line with the old church’s steeple.

Etched into the stone above Leo’s name was the outline of a bomber similar to the one he was lost in. The stone’s inscription, which notes he was killed in action, ends with the words “In memory of a life given unselfishly.”

Many years later as an adult, Ann had a small, oval photograph of Leo in his Navy uniform added to the monument. It is centered right above the plane.

In the years after the war, Mattie Brown communicated with many of the other mothers whose sons were part of Leo’s crew. The guys had been from California, Indiana, Washington State (two), New Jersey, Washington, D.C., Missouri, Tennessee, Montana, New York and Alabama.

Leo had been the crew’s captain, and he and five others had listed their wives as next of kin. Leo had married Annie Belle Kluttz on March 12, 1943 — Ann knows this exact date by an entry her mother had written in her Bible.

Annie Belle received a personal letter from the commander of Leo’s squadron on Aug. 14, 1945, that gave her some of the particulars of Leo’s last mission. Toward the end, the letter tried to offer Annie Belle a sliver of hope.

“It is our belief, based on what little evidence is available, that Leo’s plane was downed as a result of enemy action, either by surface vessels or aircraft,” the commander said.

“Under the circumstances, it is very difficult to attempt to determine the possibility of survival of part or all of the crew. … We are, of course, sincerely hopeful that all of them survived the experience and will show up some day. However, it would be very wrong to minimize the gravity of the situation based on what information is presently available.”

Andrew Brown, one of Leo’s younger brothers, says the family realized many years later that no real  search would have been conducted for Leo’s plane because the policy was not to endanger more aircraft in a rescue mission.

Mattie Brown had another son, Ben, serving in the Navy during World War II. He was assigned to the USS Melville, a supply ship, and for much of the war he was stationed on Guam.

Many of his letters home asked about Leo and how he was doing. Sometime later, after Leo was lost, Ben was getting ready to reenlist in the Navy but Mattie destroyed the reenlistment forms.

Mattie Brown never could forgive the Japanese for what happened to her oldest son. If anyone ever gave her a gift that was manufactured in Japan, she gave it back. Once she sent a new television out the door because it was Japanese made.

For people who knew Mattie, it was difficult to think of her carrying such a burden. She was always the first person to knock on the door and welcome someone new to the church or neighborhood.

She was the lady known for her beautiful gourds and her active involvement in the garden club, homemakers club and American Legion auxiliary.

Her husband, Clarence, was a quiet, reserved man who never spoke much about Leo after his death. It was just his nature.

But when it came to Leo, Mattie never could close that chapter in her life or that space in her heart. She died in 1989.

“She was always in denial,” Hirst says of her grandmother. “She believed until she died he was coming back or might be coming back.”

Hirst says she was going to be named Leo, in honor on her uncle, had she been a boy.

Clarence and Mattie Brown had seven children. Their first, Helen, lived only six days, and her little tombstone stands next to Leo’s larger monument at Organ Lutheran.

Leo Everett Brown was born June 10, 1920. And the Brown children coming after him included Ben, Naomi, Betty, Andrew and Ann. Each of the seven children was born on a different day of the week.

The family lived in a two-story farmhouse off Old Beatty Ford Road, and Leo walked to the Kluttz School, a one-room schoolhouse in the area. He later attended Rockwell School and graduated from there.

Once Aunt Mary kiddingly asked a young Leo whether he was going to sleep with the chickens that night. The family story goes that about midnight, someone looked in on Leo, expecting to find him sleeping, and he wasn’t anywhere in the house.

He thought his Aunt Mary had been serious, and he was sleeping out in the chicken coop.

All the children worked on the farm. Clarence Brown also found work at a quarry and in a cotton mill. In addition, he did some carpentry work, and during the war, he spent some time in Wilmington to help the nation’s shipbuilding efforts.

“A lot of people left during the war,” Andrew Brown says.

Leo was a good student and talented with his hands. He built his mother a lily pond and a rock building for her flowers. Andrew recalls that Leo also crafted an airplane swing, which relied on three or four ropes to give it the movement required under a big tree limb.

From what the surviving siblings can remember, Leo had some musical talents and was able to play the mandolin and fiddle.

Soon after graduating from Rockwell School, Leo enrolled at Southwestern Louisiana Institute, which was an agricultural school at the time. In 1942, as the U.S. war effort went into full swing, Leo enlisted in the Navy.

“He knew they were going to take (draft) him,” Andrew Brown says, “so he decided to sign up.”

Mattie Brown kept many of the documents related to Leo’s time in the service, and Ann spreads them out on her kitchen table. She and her own husband, Clarence, built a home on family land across Old Beatty Ford Road from where her parents’ farmhouse once stood.

Correspondence, cards and certificates on the table reveal that Leo was directed to report to Newport, R.I., in March 1942. He received additional instruction in navigation at a naval training school in Chicago, then completed Naval Air Gunners School in Hollywood, Fla., by the end of 1942.

Before shipping out to the South Pacific in April 1943, Leo married Annie Belle. He returned stateside a year later and was transferred to a bomber command, leading to more training in Hutchinson, Kan.

Leo was back in the Pacific by December 1944. He received a Purple Heart for minor wounds he received on a mission March 6, 1945, then the Navy awarded him the Distinguished Flying Cross “for heroism and extraordinary achievement in aerial flight” in action against the Japanese.

His citation said Brown was involved in missions off the coasts of Borneo, the Celebes, Malay and Indochina from April 27 to May 24, 1945.

The citation added: “Gallantly cooperating during many spotting and reconnaissance missions over enemy-held waters and territory in the face of adverse weather and the constant dread of hostile air opposition, Brown rendered invaluable service in aiding his pilot to bomb a sighted radar station.

“By his indomitable fighting spirit and courageous devotion to the task of helping to obtain valuable information for our air forces, he contributed to the success of air operations in the Pacific Area and upheld the highest traditions of the United States Naval Service.”

Not too long after those missions came the flight in which Leo’s plane was  lost.

According to the letter sent to Annie Belle, Leo’s plane left its base in the Philippines on the morning of July 30 to conduct a regular search patrol mission. A few hours later, when the plane was 600 miles out in its search sector, the plane sent back a message to the base, reporting its position.

About a half-hour later, several other aircraft in the area picked up messages from Leo’s plane. “These were merely routine requests for the base to acknowledge receipt of their position report,” the letter said. “That was the last communication received by anyone from the plane.”

The commander’s letter went on to say that surface vessels, submarines and aircraft in that area were alerted to be on the lookout for wreckage or survivors. Counter to what the family still believes to this day, the commander said, “as soon as possible, search planes were dispatched from this base and thoroughly covered the area in which the aircraft was operating.”

“The results of these searches has been negative,” he added. “However, during the course of these searches several enemy aircraft were sighted in the general area. It is also known that enemy surface craft are active in this vicinity.”

Annie Belle Brown and Leo never had children. She would go on to marry again and raise a family.

Leo, whose official position was as an aviation machinist’s mate first class, in the U.S. Naval Reserve, would receive a second Purple Heart posthumously. It was awarded Sept. 25, 1946.

Over the many years after the war, Leo was never forgotten. “Daddy talked about Leo a lot,” Hirst says. “They were close.”

At the Organ Lutheran Church Cemetery, when kids would go on scavenger hunts, inevitably clues given include something about Leo’s marker.

Find the tombstone with an airplane on it. Or locate a marker with the photograph of a man wearing a sailor’s cap.

That Navy man would be Leo Everett Brown, the son his mother would dream about every night.