‘We Love You, Charlie Freeman’ — no simple answers here 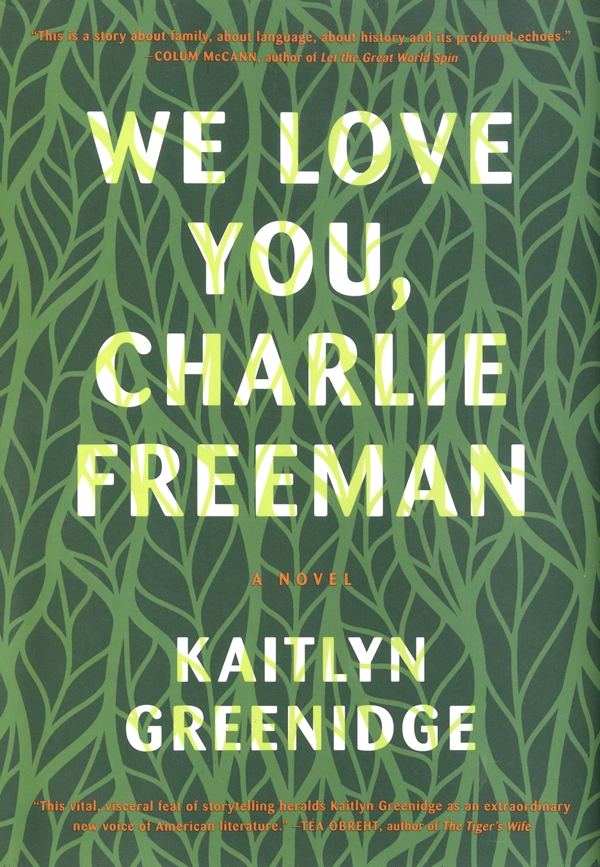 “We Love You, Charlie Freeman,” by Kaitlyn Greenidge. Algonquin Books of Chapel Hill.

The innocuous title, “We Love You Charlie Freeman,” belies a story brimming with issues of race, family and morality.

Charlie Freeman is a chimpanzee, and he’s living at the Toneybee Institute with a bunch of other apes who are the subject of intense study. Can chimps learn to speak through sign language?

The Freeman family is hired to try, moved to the institute and introduced to Charlie. The Freemans are African-American. Instantly, daughter Charlotte is suspicious — what is this study really about?

The other part of the story belongs to a woman whose secret name is Nymphadora, a name plucked from the Bible during a ritual that makes her special, gives her responsibilities.

The modern day experiment with the Freeman family has shocking echoes in Nymphadora’s story, from the 1920s, when scientists were comparing Negroes to apes. They studied features, body structure and brain activity.

That’s how the book grabs readers, with a shocking sort of fascination that this ever happened. With modern-day Charlie, it’s still a shadowy world of secrets, as it was with Nymphadora, who was more blatantly exploited.

The Freemans are making up the rules as they go along, with a little guidance from the chalk-eating Dr. Paulsen. In the 1920s, Dr. Gardner had a firm set of rules which he applied to his work with Nymphadora, only she doesn’t know what they are, and when she finds out, it breaks her spirit.

The Freeman family is from Boston, mother Laurel and father Charles, daughters Charlotte and Callie. Charlotte is 14 going on 30 and Callie is a naive 9-year-old who turns to food for love.

Laurel and the girls know sign language. Charlotte uses it as a form of rebellion when she finds herself being ignored and forgotten by classmates and, it seems, the rest of the world.

Charlotte is introverted, awkward and sassy. She calls ‘em as she sees ‘em, and she sees the complete inappropriateness of the whole thing.

Because she’s a teenager, starting at a new school makes her feel invisible and too visible at the same time, a black girl in an all-white school. Prejudice endures in the 1990s.

The living arrangement is completely intrusive. Callie and Charlotte have their own rooms — something that scares Callie — and Charlie has a room, too. Their interactions are taped. They learn to like Max, the camera man, but it’s a strange thing.

When Charlotte makes a friend of the only other African American in the school, it’s a relationship of scrutinies, impassioned declarations and  physical attraction. Adia is full of progressive thoughts, as is her mother, a potter named Marie who fills her daughter’s head with indignation and rebellion.

At first, Charlotte is reluctant to tell them what is going on at the Toneybee. But she craves Adia’s attention.

At home, Laurel gravitates towards Charlie as if he is more precious than her own daughters. She pampers him, coddles him and responds to all his whims.

Charlotte’s father tries to look away. Callie is madly disappointed because the chimp rarely pays attention to her. So she eats.

In Nymphadora’s time, she’s isolated and alone after her parents die, even though she teaches school. When a white man consistently stops at the school to sketch the children, the residents of Spring City ask Nymphadora  to find out what’s going on and get rid of him. Her solution is somewhat odd — she agrees to let Dr. Gardner sketch her. He’s particularly interested in her backside, which she uncovers. It’s her secret. It makes her feel special and important.

Gardner is from the same Toneybee Institute.

Jealousy and isolation are constant themes. Each character suffers. We know Charlotte is a teenager in the throes of change; Callie is a lonely little girl who wants attention; Charles is uncomfortable with the situation and his wife’s behavior. Nymphadora has delusions.

The characters we know the least about? Charlie and Laurel. Laurel longs for something, perhaps another child, or to be someone important. But author Kaitlyn Greenidge doesn’t dip into Laurel’s mind.

We can’t know Charlie’s mind. And therein lies the naked truth. As humans, we impose thoughts on animals, even inanimate objects. Greenidge simply writes of behavior.

In the 1920s. Nymphadora is also looking for love, for someone to care for her, to find her interesting.

It’s Charlotte who sees her mother interact with Charlie in a very questionable way. But the plot simmers for a while before boiling over explosively.

The family is already breaking apart, each sinking into dysfunction and sadness. Poor Callie, confused, without guidance, brings about a near tragedy.

Greenidge is good enough to write of the aftermath, though not dwell on it.

It’s a chilling novel, even on the simplest level, and not just because of the racism the Freemans and Nymphadora face. Women are objectified. No one, especially the Toneybee Institute, takes responsibility.

Greenidge tells a compelling story in such simple, straightforward language that its impact sinks in slowly.

What makes us human? What is a life worth? Is science pure, without motives? Those are the questions to ponder.