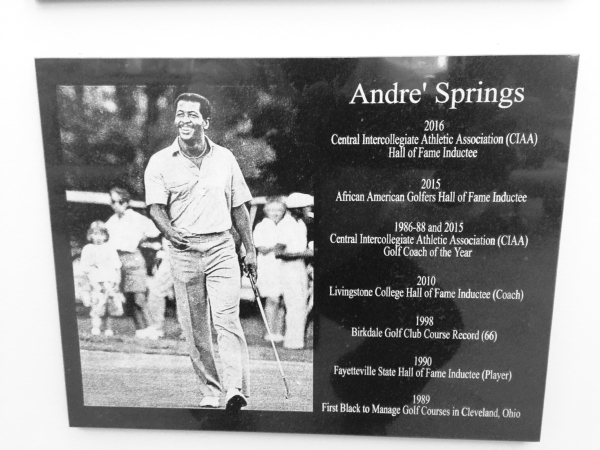 CHARLOTTE — When Andre Springs was a kid, he and his brothers worked weekends at a Charlotte golf range picking up practice balls for re-use.

It was a fun job for Springs who, like most African-American kids in West Charlotte, grew up playing basketball, football and baseball – but not golf.

Nowadays, playing golf is a way of life for Springs. And he’s darn good at it.

Years after working with his brothers on the golf range, Springs led Fayetteville State University to four consecutive CIAA titles as a student-athlete. After graduating from FSU, he became the golf coach at Livingstone College and led the Blue Bears to their first CIAA golf title before eventually leaving to become the first African-American general manager of a golf course in Cleveland, Ohio.

In 2010, Springs returned to Livingstone to resurrect its golf program, leading the Blue Bears to the CIAA championship in 2015 and to a second-place title finish this year.

For his body of work, which includes caddying for Arnold Palmer and becoming a highly sought-after teaching professional, Springs has been elected into the CIAA, the Fayetteville State University, the Livingstone College, the African-American and Mecklenburg County halls of fame.

He’s proud of the individual recognitions he’s received, but Springs is happier about putting golf back on the map at Livingstone.

“When I was at Livingstone the first time, we had a really good program and everybody in the league knew beating us was hard,” Springs said. “After I left to take a position in Cleveland, the golf program eventually faded away.

“When I returned, it was tough at first because I had to literally rebuild the program from scratch,” continued Springs. “Early on we took our lumps, but every match helped us get better. Winning the CIAA championship last year and almost repeating as champions this year are a testament to the hard work and dedication the players and I have invested.”

Springs may be quick to deflect attention from himself, but Livingstone President Dr. Jimmy R. Jenkins, Sr. has some praise for his golf coach, who is also the institution’s athletics director.

“Andre Springs is a fine golfer, and I was really fortunate to be able to bring him back to Livingstone,” Jenkins said. “He’s met and even exceeded my expectations, and he’s deserving of all of the awards he’s gotten and halls of fame into which he’s been inducted. Coach Springs has put Livingstone golf on the map, and we’re excited about what’s in store for the program, and athletics in general, on his watch.”

Springs said with the return of Philip Harrison and some other key golfers, he anticipates competing for the CIAA crown again next season.

“I’ve been blessed tremendously because of the game of golf,” Springs said. “The sport has opened doors for me I never even imagined, and I’ve met some legendary golfers like Charlie Sifford, Arnold Palmer and Walter Morgan during my career. Golf is such a great sport. It challenges you physically, and it certainly challenges you mentally. I’ve loved golf from the first time I was introduced to it, and I can’t imagine my life without it.”