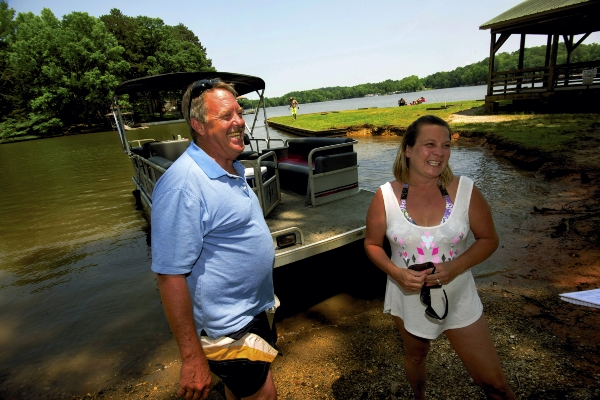 Winfield Thompson V and wife Amy make a stop at Tamarac Marina to pick up supplies for their weekend stay at High Rock Lake. Life around High Rock Lake begins to heat up on the First day of the Memorial Day weekend. For many, Memorial Day is the kick off to summer activities. Fishing, boating, skiiing, sun bathing, swimming and even a sand castle or two are not uncommon along the lakeside. Friday, May 27, 2016, in Salisbury, N.C.

Fun in the sun on High Rock Lake, boaters gear up for Memorial Day

HIGH ROCK LAKE — A week ago, Angie Baker bought a pontoon boat and on Friday, she and two girlfriends decided to get a jump on the Memorial Day holiday with a day out on High Rock Lake.

“We started early to avoid the people,” Baker said.

She, along with friends Bobbie Sue Henson and Kim Mathews, decided to spend the day on the boat “getting some sun, listening to good music and drink sodas,” Baker said.

They figured the lake would be crowded as the weekend drew near and wanted to start the fun early.

“It’s part of my bucket list,” Baker said of her boat.

She had a previous boat, but it “wasn’t a good boat,” Baker said.

When Baker looked at boats she wanted one that would accommodate her family of six.

Dawn Aistrop and fiance John Wayne Payne spent the day at High Rock with his brother, Seth, 13, and sisters Sarah, 11, and Sadie, 9.

The Salisbury residents said they were also starting the celebrations early just in case Aistrop was called into work. They spent the afternoon swimming, fishing and making sandcastles.

“The lake is peaceful,” Aistrop said.

She said they planned to stay until the evening. John Payne said he hadn’t been to High Rock Lake for about five or six years.

He brought his sisters and brother out to the lake to give his father a “break from the kids,” he said.

Amy and her husband Winfield Thompson V recently bought a pontoon boat and have been out on the lake just about every weekend. The newlyweds said they came out early but were expecting about 10 other family members to join them to camp out on one of the islands near Eagle Point.

“We brought the jet skis and we will be here all weekend,” Amy said.

About 12 years ago, Ricky Scott began hosting a party that started with a few friends over for the Memorial Day weekend and has grown to about 30 regulars. Scott along with friends Bryan Segers of Charlotte, Jonathan Bogart of Rock Hill and Brandon Moore also of Charlotte spent Friday prepping for the party.

The festivities will include water skiing and pulling out the inner tube, Scott said.

“It kicks off the summer,” he said.

Ashleigh Lambert and Lyndy Buffett weren’t getting ahead of the Memorial Day crowd, but they were at the lake to get some sun.

Friday was Lambert’s birthday and the women planned to be at the lake for a couple of hours.

By Shavonne Walker shavonne.walker@salisburypost.com SALISBURY — Ava Fryar donned her sunglasses in the 80 degree Friday heat with her quilted... read more