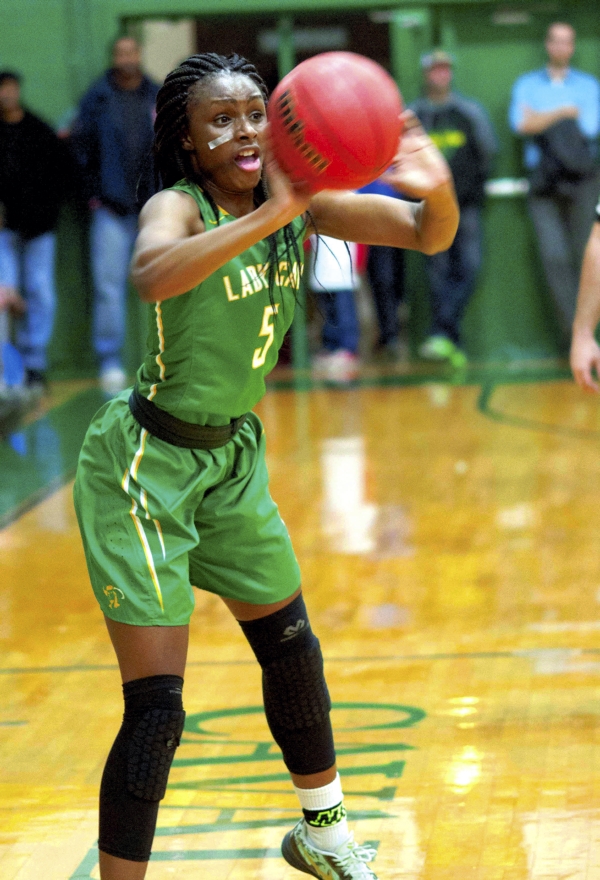 JON C. LAKEY / SALISBURY POST ... North Rowan’s Aliyah Farmer passes the basketball during a 54-29 win over Salisbury on Jan. 21. Farmer announced on Thursday that she has signed to continue her education and athletic career at Mars Hill University.

SPENCER — Thursday’s signing party for North Rowan basketball star Aliyah Farmer set an unofficial world record for most hugs.
Farmer’s huggers included not only family and classmates but two opposing coaches in the Central Carolina Conference — Salisbury’s Lakai Brice and Lexington’s Toccara Tatum. That was an indication of Farmer’s specialness as a person as well as an athlete.
Farmer is headed to Mars Hill University, a school located 19 miles north of Asheville and a member of NCAA Division II South Atlantic Conference. That means she’ll be competing against Catawba next school year.
Farmer plans to major in criminal justice and she’d like to become a lawyer.
While she signed with the Lions for basketball, Farmer said she also hopes to compete in volleyball and she hasn’t ruled out taking a shot at the jumps in track and field.
“Mars Hill is a very good chance for me,” Farmer said. “I might be able to do all three.”
While she’s only 5-foot-8, Farmer is capable of making an impact in any of the three sports at the D-II level. Her athletic gifts as far as leaping ability, strength and quickness are exceptional. Her determination and competitiveness also are off the charts.
“Without a doubt, she’s one of the most phenomenal female athletes in our area,” North Rowan Athletic director Ben Hampton said. “Plus, she’s got a good head on her shoulders.”
Farmer made a college decision late because while her GPA is high, it took time for her to achieve a qualifying standardized test score.
“I had some offers so there was a lot of pressure trying to get that test score during the basketball season,” Farmer said. “I must have taken the test four or five times. I think I was a lot more relaxed after the season was over, and I got the score I needed.”
Farmer said Mars Hill began recruiting her when she was a junior. The Lions, because they offer a criminal justice major as well as the opportunity to play multiple sports, were always high on her list.
Basketball has been a journey for Farmer. She’s grown a ton.
Over four varsity seasons, her personality made the transformation from silent, frowning intensity to vocal, outgoing team leader.
Her game expanded from layups-only to smooth 15-footers while her ballhanding improved from turnover-prone as a youngster to grabbing boards and confidently leading the break as a senior.
“When you played against North Rowan the first thing you had to do was find Aliyah,” Brice said. “She did a lot of things for her team. She scored, she defended, she rebounded. You had to try to get a body on her because her jump is so quick. Her second jump is unbelievably quick. She was playing the 4 or 5 position for North, and that was always a tough matchup for us because she’s going to blow by 4s and 5s every time.”
The best way to defend Farmer in the past was to back off and let her shoot, but her hard work on her jumper made that a less appetizing option her senior season.
She finished her career just shy of 1,000 points — 994 for 10th place in school history. She scored 44 percent of those career points as a senior when she averaged a team-best 16.3 points per game and averaged 11 rebounds. She was an automatic double-double.
Farmer was runner-up in the voting for Central Carolina Conference Player of the Year and she was one of the finalists considered for Rowan County Player of the Year. As her shooting range gets deeper, she should be able to make the transition to a fine wing player in college.
North had a 19-8 record Farmer’s senior year. A banner season for coach Brian Lytton included a Christmas tournament championship, a second-place finish in the CCC behind state runner-up East Davidson and two state playoff wins.
Farmer’s senior volleyball season for coach Sandy Lytton was nearly as impressive. She was one of the county’s top 10 and did astonishingly athletic things at the net. She led North with 233 kills and 37 blocks and was second on the team to Winston-Salem state signee Makala Lytton in aces and digs.
“I started playing volleyball late,” Farmer said. “But it wasn’t hard to learn.”
Athletically, things came naturally for Farmer. As far as the rest of it — learning to trust teammates and learning to lead teammates — those things took a bit longer. But she had strong people, including her mother Janice, to keep her moving in the right direction.
“I was Aliyah’s first volleyball coach and those were years when you had to discipline her,” said Talita McClain, a North Rowan graduate who went on to play volleyball at Catawba. “I remember a match we played with five girls because I had to sit Aliyah down to learn some lessons. But she learned those lessons. She’s come a long way, and we’re all very proud of her.”
Farmer was recently voted North’s prom queen, the crowning touch on her sensational senior year.
“I just tried to stay in shape and to always keep working and I believe I kept making progress every year,” Farmer said.