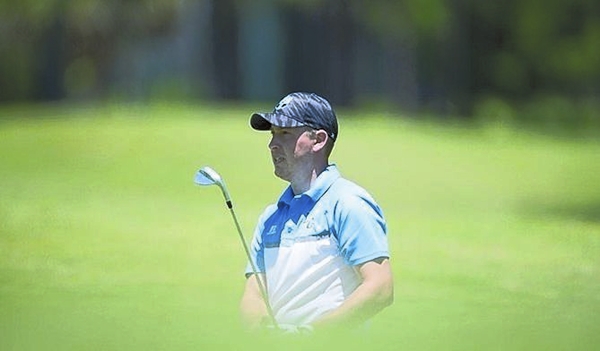 Livingstone golfer Harrison getting it done, on and off the course

SALISBURY — Philip Harrison of the Livingstone College golf team is the epitome of a student-athlete.

His perfect 4.0 GPA recently earned him Central Intercollegiate Athletic Association Scholar Athlete of the Year honors, and he was also the low medalist in the conference.

And, as if that wasn’t enough, earlier this month at the 30th annual PGA Minority Golf Championships in Port St. Lucie, Florida, Harrison defeated 50 other U.S. players to become the low medalist winner —a first for Livingstone.

“The PGA of America is really proud of Philip’s accomplishments,” said Chris Childers, director of junior championships. So is Harrison’s coach, Andre Springs, who’s thankful he recruited the player who helped lead Livingstone to a second-place finish in the CIAA this year and the league title last year.

Not bad for someone who’d never heard of Livingstone a few years ago and was bound for another institution.

“I was going to go to Virginia State to play golf,” Harrison said in a recent interview. “But a few things happened on their end, and Coach Springs started recruiting me. I’d never heard of Salisbury, but he had me come to town to tour the school. It was small, which was what I was looking for, and it had a good golf program and a good team so that was that.”

Harrison, of Richmond, Va., ended up at Livingstone by chance, similar to how he got seriously involved with golf.

He began playing the sport at 14, but had been playing baseball since age 6 for the Chesterfield Baseball Club. As an eighth grader, Harrison tried out for the junior varsity squad at Manchester High School in hopes of playing on the squad as a freshman.

“I didn’t make the baseball team … so instead I tried out for the golf team since I’d already started playing golf,” Harrison said. “I made the golf team, and I ended up playing golf all four years in high school.”

Harrison was really disappointed about not making the jayvee baseball team because he loves the sport and felt he was better than some of the players who made it. Nonetheless, he turned a negative situation into a positive one by focusing all of his energy on golf.

“Philip getting cut from the jayvee baseball squad was a blessing in disguise, although it probably didn’t feel like it to him at the time,” Springs said. “When you’re a kid and something bad happens, it can feel like the end of the world. Fortunately for Philip, he turned to golf, and fortunately for Livingstone, he came here. Philip has been an asset to our program, and we’re proud of what he’s accomplished. I’m sure he’s going to practice hard over the summer and

“Philip is getting it done both in the classroom and on the greens,” Jenkins said. “When you’re an athlete it’s easy to sometimes let your grades slip because of the demands of practice and games, but Philip has managed not to do that. In fact, he’s one of the first Livingstone athletes I can recall in recent years who excelled in his or her sport while maintaining a perfect GPA, and

we’re really proud of him for that.”

Before Harrison won the low medal award at the PGA Minority Golf Championships, he competed in the NCAA Regionals in Syracuse, N.Y., where he finished tied for 40th place among 110 golfers in NCAA Division II.

Harrison is fairly low-key about his accomplishments, saying that for now he wants only to continue getting better and helping Livingstone’s squad.

Of course, he grew up watching legendary golfers like Tiger Woods and acknowledges he does at times ponder competing professionally.

“That’s something I’m really just now starting to think about,” Harrison said. “I know some guys who’ve tried to take it to the next level. Once you get to a certain skill level it’s all in your head. I’m starting to get to the point where I think that I might be able to take this to the next level.”

Should Harrison pursue golf professionally after graduation, he knows his parents Flip and Melody Harrison will support him 100 percent.

“My dad usually makes it to just about all of my matches, and my mom comes when she can,” Harrison said. “My dad was in Florida and stayed the first few days of the tournament, but he wasn’t there to see me seal the deal. When I called them to tell them I was the low medalist winner at the PGA they were elated, though, truthfully, I think my dad was more upset that he wasn’t able to be there on the last day when I actually won.”