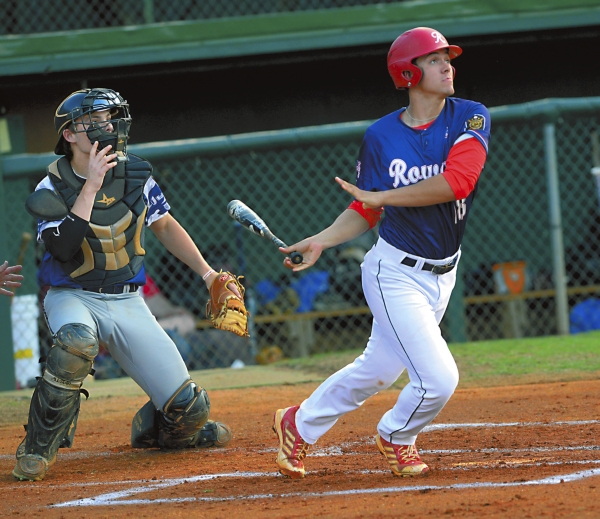 SALISBURY — Rowan County’s American Legion baseball team dropped another slugfest on Wednesday.
Rowan got a two-run homer from Hunter Shepherd and two-run doubles from Lee Poteat and Trevor Atwood but still fell, 10-9, to High Point at Newman Park.
Rowan (1-2) had the lead three different times, but didn’t own it at the end.
“It takes a little time to get the chemistry right and for everyone to come together,”said Poteat, Rowan’s right fielder. “We’re just not there yet.”
The loss had a lot in common with Monday’s 12-10 setback against visiting Randolph County. As was the case on Monday, the visitors scored the decisive runs in the eighth against Rowan’s bullpen.
Rowan used Hayden Setzer, Caleb Link, Joe Harrison, Olen Stamper and Colby Myrick on the mound. All five made some good pitches. One of the relievers could’ve been a winning pitcher, but Rowan’s defense wasn’t good enough. There were five errors in the scorebook and several more plays in the infield that might’ve been made.
“You can put this loss down to poor defense,” Rowan coach Jim Gantt said. “We had some bad pitch selection and some bad defense. We made crucial errors.”
Rowan didn’t score in the fifth, sixth, seventh or eighth as the game swung in High Point’s direction. High Point (1-1) had right-handed horses on the mound by that point Dylan Wilkinson, who is headed to USC Upstate, won it, and Luke Gesell, a 6-foot-4 UNC Wilmington signee, saved it.
“Against arms like they had on the back end, about the only way we were going to beat them was to wait them out,” Gantt said.
It started out well enough. Shepherd’s two-run homer in the first — an absolute bomb — made it 2-0. Juan Garcia was out at the plate trying to score on Jake Pritchard’s one-out double, but Poteat picked everyone up by smacking a double of his own to drive home Pritchard.
“Guys did a great job getting on base in front of me, and I was seeing the ball well,” Poteat said.
A leadoff walk and textbook bunts by Nick Goard and Gessell set up High Point’s three-run third that tied the game.
Rowan untied it in the bottom of the third with the help of two High Point errors. Atwood’s two-run double gave Rowan a 6-3 lead.
After a double play, High Point had two out and none on in the fourth when No. 9 hitter Andy Ramirez kept the inning alive by punching a single. Link had Ramirez in an 0-and-2 hole, but Ramirez’s clutch hit led to three runs.
“That was a very big inning for us,” High Point coach Rob Shore said. “We’ve got a lot of winners. We’ve only got two college players this year, but we’ve got a lot of kids who played for high schools that won 20 games. We got down early, but we weren’t going to give up.”
Poteat’s two-run double in the fourth followed a walk to Garcia, an infield hit by Pritchard and a wild pitch. That gave Rowan an 8-6 lead, but Wilkinson took the mound to start the fifth, and Rowan’s bats went silent.
Ramirez was injured running to first base, but his second single against Link triggered High Point’s two-run sixth that evened the game at 8-all.
Stamper pitched his way through the seventh and struck out the leadoff man in the eighth. But Kip Brandenburg’s single, a wild pitch and Wilkinson’s double to left-center gave High Point a 9-8 lead. With two out, Timmy Fischvogt’s run-scoring single pushed the lead to 10-8. Wilkinson would’ve been out at the plate — by a lot — but Rowan’s defense didn’t execute.
“You’re pleased when you score 10 runs and you should feel secure whenever you score 10 runs, but we were never secure tonight,” Shore said. “Rowan can swing the bats.”
Rowan swung the bats a bit more in the bottom of the ninth. Brandon Walton wasn’t in the lineup due to a mild hamstring injury, but he came off the bench and hammered a Gesell pitch for the run-scoring double that cut Rowan’s deficit to 10-9. Pinch-runner Noah Gonzalez stole third, trying to put pressure on Gesell and High Point’s defense, but Gesell was undaunted. He ended the game with a punch-out on a high fastball.
“It was an exciting game, and I’m a great believer that games like this are why Legion baseball is the best way for players to prepare to play college baseball,” Shore said. “You don’t play in games like this and play in environments like this in showcase ball.”
Rowan is 1-2, but it also was 1-2 early last season when it won the state championship. It was a frustrating loss, but Gantt stayed positive.
“We had a lot of quality at-bats, especially early,” Gantt said. “We hit it.”
•••
NOTES: Shore, who will be blending players from six high schools, agreed with Poteat that the biggest challenge for Legion programs is building chemistry. Shore said he expects to add four players, mostly arms, from the Ledford team that’s made a long playoff run in 3A. … Rowan’s game with Davidson County that was scheduled for tonight has been canceled. … The May 31 game scheduled to played at Greensboro has been moved to Newman Park. … Rowan ended High Point’s 2015 season with a 4-3 state-tournament win at Newman Park.