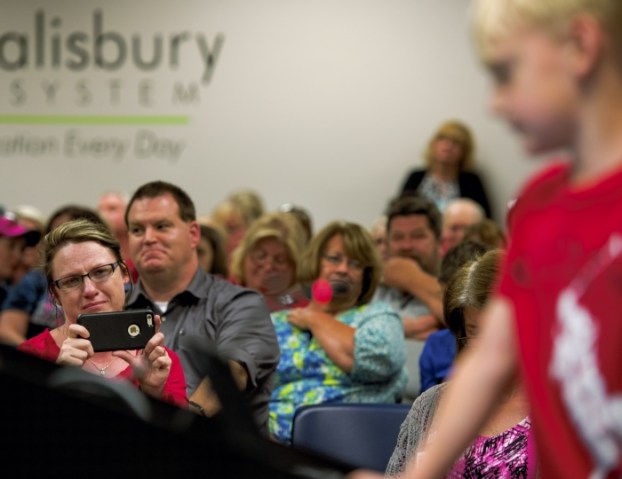 A mother sheds tears as she films her son at the podium giving his thoughts on school closure during the public comment portion of a Rowan-Salisbury Board of Education meeting earlier this year. Allison Lee Isley/Salisbury Post

It’s hard to see how a public board could go wrong holding meetings at a time that is citizen-friendly.

The majority of the Rowan-Salisbury Board of Education voted wisely this week to begin the board’s monthly business meeting at 5 p.m., an hour later. As board member Dean Hunter said, if only one person a year takes advantage of the later hour, the time will be well spent.

Now more than ever, citizens need to have confidence in and easy access to their elected officials. If an important public board meets only when many people are still at work, the board sends the message — unintentionally, perhaps — that it doesn’t want public input.

The vast majority of school board meetings move through the agenda with little fanfare and even less of an audience. But when issues of public interest do arise — such as school consolidation or pepper-spray policies — citizens get energized and want to tell the board what they think. They should be able to do that without disrupting normal work schedules. It’s impossible to find an hour that is convenient for everyone, but starting at 5 p.m. or later seems like a reasonable norm.

In fact, that’s still early compared to many local public bodies. Municipal boards across the county usually start their meetings around 7 p.m. It makes a long day for town staff members, but the late hour accommodates most work schedules for the public — not to mention the board members themselves. They have day jobs, too.

Which brings up another important point. Few working people can serve on public boards that meet during regular business hours. Serving in public office has become the domain of people who own their own businesses, are retired or otherwise are free to come and go as they please. Our public boards need to represent everyone, not just this fairly elite group.

Furthermore, streaming public meetings online as they happen and posting the videos immediately after should be the new normal for local elected boards. This further broadens the audience that can keep up with a board’s action as it happens if they cannot attend the meeting themselves. And watching the video later is the next best thing.

Later meetings, online streaming and prompt posting of meeting videos could go a long way toward helping people understand how their elected boards operate and what goes into important decisions. The Board of Education has taken a promising step by moving one meeting a month to a more citizen-friendly time. Now it’s time for the public to step up, too, and take advantage of this increased access.

When the U.S. Census last week released population statistics for municipalities last week, the results for Rowan were about what... read more