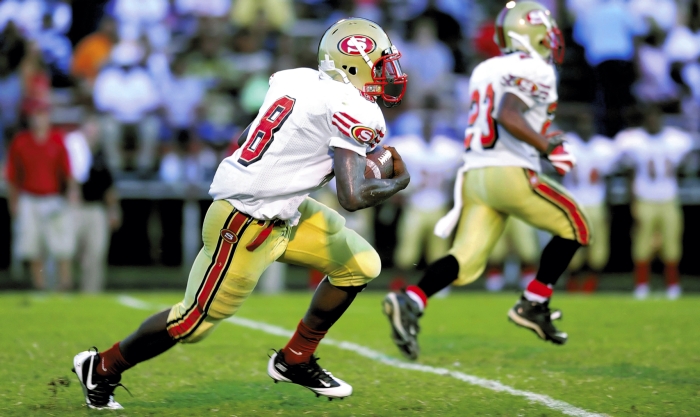 The New York Jets signed Romar Morris to a contract on Tuesday and made him a member of the 90-man roster.
The signing elevated Morris from the ranks of the 22 undrafted free agents who were invited to mini-camp to being an official Jet. New York waived tight end Jerome Cunningham to make room for Morris.
“It’s been a blessing,” the Salisbury High graduate said. “I signed a contract, and 15 minutes later I was on the field.”
Morris was on the field because Tuesday was the first day of Organized Team Activities — OTAs.
OTAs are voluntary, at least for the veterans, and are a sort of glorified spring practice for the pros. There will be 10 days of OTAs in May and June. It’s not exactly football yet, but OTAs are a baby-step toward the real football season.
“We ran scripted plays and I was in on the drills on special teams as a gunner and a returner,” Morris said.
Preseason games won’t begin until mid-August. In their first game, the Jets will take on the Jacksonville Jaguars (and West Rowan alum Chris Smith) at MetLife Stadium.
Morris’ exceptional speed stood out in mini-camp, and the Jets obviously want to get a better, closer look at what he can do. Morris, a state champion in the track dashes in his high school days, consistently runs 4.3 40s and has run as briskly as 4.28.
The Jets’ special teams weren’t highly regarded last season. That’s the area where Morris (5-foot-9, 190 pounds) has a chance to make an impact on a team that narrowly missed the playoffs in 2015.
The Jets have a new special teams coordinator, Brant Boyer, who spent the last four seasons as the Indianapolis Colts’ assistant special teams coach.
Morris’ size and skill set might eventually make him a slot receiver as far as his primary position, but on Tuesday he practiced with the running backs, the position he played at Salisbury and at North Carolina.
Morris played in 50 games in four years at North Carolina. He had 1,024 yards on 214 carries and 12 touchdowns in his career, while adding 54 receptions for 499 yards and two touchdowns. His quietest season was his final one, but he showed his wheels on North Carolina’s Pro Day for scouts, and that placed him on the radar of the Jets.
Undrafted free agents have made their mark in the NFL before, including UNC’s Willie Parker who became a standout back for the Pittsburgh Steelers and turned in three 1,000-yard rushing seasons.
Morris isn’t thinking about 1,000-yard seasons yet. He’s just hoping to survive the cut-downs that will trim the roster to 75 by end of August. If he can take that step, he’ll have a shot at making the practice squad and even the 53-man opening day roster.
“The 53-man is the goal that I’ve given myself,” Morris said.
For now, Morris will live, sleep in a hotel with the other rookies near the Atlantic Health Jets Training Center in Florham Park, N.J.
All he’s ever asked for is a chance, and his NFL dream is still alive.
“I’m thankful that the Jets have given me a chance to show what I can do,” Morris said. “I’ve been given a great opportunity. I intend to take full advantage of it every step of the way.”