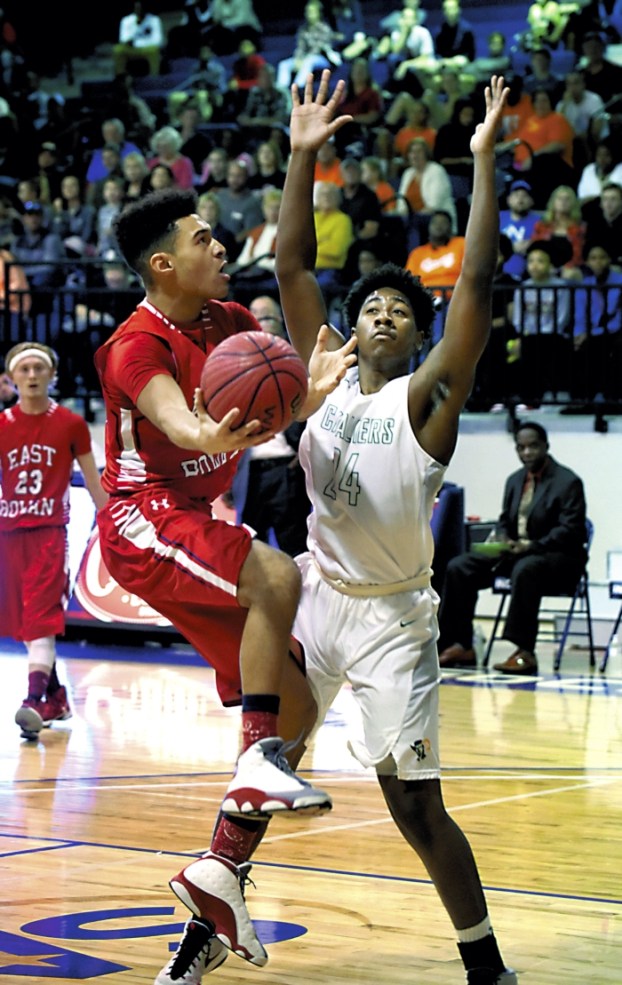 GRANITE QUARRY — Not everyone gets to play college basketball a dozen miles from the gym where he competed in high school, but that will be the case for East Rowan’s Austin Love.
Love, a 6-foot-2 shooting guard, signed with Pfeiffer last week, so he can almost jog across the Stanly County line to his new home in Misenheimer.
It should be a neighborhood signing that benefits both parties.
Pfeiffer was 14-15 and averaged 75.3 points per game last season, a scoring pace that ranked 183rd among the 300 D-II squads. Love can score and score in bunches, so he should add instant offense. Pfeiffer averaged a modest seven 3-point makes per game, and Love definitely can boost those numbers.
“Austin had several offers,” East coach Kurt Misenheimer said. “He had Division II, Division III and junior college offers. He’s got sky-is-the-limit potential.”
Pfeiffer also will benefit from having Love in the classroom and representing the school in the community. He’s a 3.6 GPA student who’s probably getting as much scholarship money for academics as athletics. He’s a good bet not just to contribute on the court but to earn a degree — probably a master’s degree.
Love has an academic plan mapped out and hopes to obtain an undergraduate degree in business and a master’s degree in business administration in five years. That’s a “3-and-2” option Pfeiffer offers. He hopes to play basketball for four years and to coach as a graduate assistant his fifth year on campus.
“When I visited Pfeiffer, I liked everything they showed me and everything the coaching staff said hit my ears well,” Love said. “Pfeiffer is my style of school and their basketball fits my style. They talked to me about shooting 3-pointers and getting to the foul line and making free throws, and those are things I can do.”
If Love sounds like a youngster with his head on straight, that’s definitely the case. He went through challenging times at East his junior year, but he’s come through it in good shape and with a solid grasp of the big picture. He understands basketball is temporary, but education will serve him the rest of his life.
Love was a fine player for East, making the varsity as a sophomore and scoring in double figures in his first three games. That was an East team that struggled to a 4-18 record in its first year back in the tough South Piedmont Conference, but Love averaged 8.9 points per game, second on the team.
Love’s junior year started with a bang — 20 points — in a victory against rival Carson — but by January his playing time had dwindled and there were a couple of games where he didn’t play at all for a 9-14 team that needed his firepower.
“Looking back on that season there were a lot of sticks and stones, but Coach (Trey) Ledbetter was stressing defense,” Love said. “I did make myself a better defender, and as tough as that year was, it was a year that helped me become a stronger person. It helped me be who I am now.”
Love’s senior year was smoother sailing. He was good — second team All-Rowan County and East’s leading scorer. He was especially good in the county games — 19 points against Carson, 14 and 15 against West Rowan, 17 and 21 against South Rowan. That 21-point night against South came in the final game of his prep career, and he looked every inch a college player in leading the Mustangs to a hard-earned 60-57 victory.
“Austin was our most consistent guy,” Misenheimer said. “He’s long, he’s agile, and he’s strong with the ball. Our conference was unbelievable, with several big-time D-I guys, so it was easy for a guy like Austin to get overlooked, but he did a great job.”
East finished 6-18 Love’s senior year. The Mustangs weren’t bad, they just weren’t as good as most of the people they were playing.
“I played against guys I’m looking forward to seeing on TV,” Love said. “It was great competition and it made me a better player.”
How early and how much Love gets to play at Pfeiffer will come down to the strides he makes on defense. It’s not that he’s a bad defender — his defense just isn’t as good as his offense. Offensively, he’s smooth, efficient and fun to watch. His shooting stroke is a thing of beauty.
“I’ve always been able to shoot, so people always ask about my defense,” Love said with a smile. “I know I’ve got to get better on defense, but I also know I’ve made progress.”
Misenheimer agreed Love had improved defensively. He also agreed he’s got more work to do.
“When I talk to college coaches about players, the first thing they want to know is can they guard anybody,” Misenheimer said. “Most people at the college level were good scorers in high school. The teams that are successful are the ones that can stop people.”
Pfeiffer has started a transition from Division II athletics to Division III. That move is expected to be completed by the fall of 2019, so Love will be part of a new era for the Falcons.
“I’ve watched Austin grow for four years, as his jayvee coach, as an assistant coach, and finally as his head coach,” Misenheimer said. “The key word with Austin is potential. Unlimited potential.”