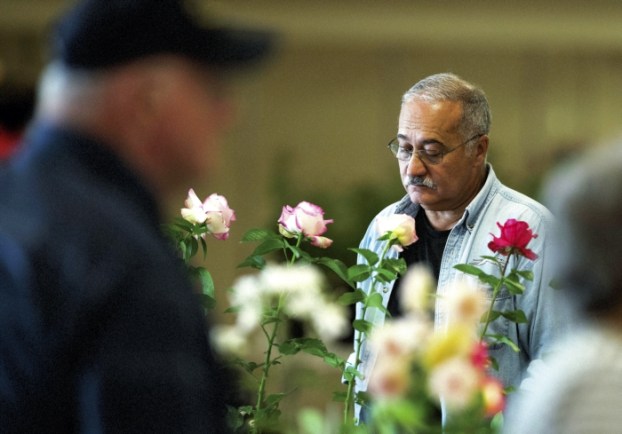 JON C. LAKEY / SALISBURY POST Pat Stellute, from Salisbury, enjoys coming to the rose show every year. Stellute has roses of his own but enjoys coming to the show to see the displays. The 57th Rowan Rose show was held at the former JC Penney store at West End Plaza on Saturday.

“That’s what it is,” he said. “Persistence from the beginning to the end.”

But when it comes to competing, you need a little luck, too. Whitt, a grower from Charlotte, entered several blooms in this year’s Rose Show, sponsored by the Rowan Rose Society. The show moved house last year from the Civic Center to the old J.C. Penny building at West End Plaza, where it was held again Saturday afternoon. This is the Rowan Rose Society’s 60th year, and its 57th regional Rose Show.

While Whitt didn’t manage to win the “queen” – the perfect bloom — he stole the other honors for full-sized blooms. The “queen’s corner” table of honor was full of his roses. Whitt was also awarded the queen bloom for miniature roses.

Wesley Seamon, event coordinator for the show, said that roses are judged on their form, the size of the bloom and its proportion to the stem and a lack of disease. A bloom too small, too large or just shy of a full blossom can hurt entrant’s chances.

“I didn’t pay attention like I should have because I didn’t know what I’d be doing now,” he said.

And getting a rose ready for competition is a long process.

“It’s a two-month journey to get them to this point,” he said.

Growers who hope to enter a competition need to be in the garden every day, and roses never bloom when you need them to, he said. Many of the blooms standing proudly in glass Coca-Cola bottle vases were picked as buds two weeks ago and placed in a refrigerator to slow their growth.

A week of constant, and often heavy, rain before the show meant that those who didn’t cut and preserve their roses ahead of time were out of luck. Rainfall will ruin a bloom faster than you can blink, Seamon explained. This year’s show was smaller than usual, as a result – but Seamon said it was still a good turnout.

The long black tables were lined with blooms bursting with color – from sunshine yellow to violet. Booths in the back were filled with sprays of flowers, fancifully arranged to fit this year’s superhero theme.

While competitive growing takes a green thumb and a good eye, there’s also a lot of luck involved. Some days, Seamon said, he won’t find anything he can use in his garden – but some days, he finds the perfect bloom.

“You just never know what your garden’s going to give you,” he said.

“With thankful hearts:” Hood Theological Seminary graduates go forth to serve in a challenging world

By Hugh Fisher hugh.fisher@salisburypost.com SALISBURY — Some of them will be pastors, while others will serve as chaplains or associate... read more