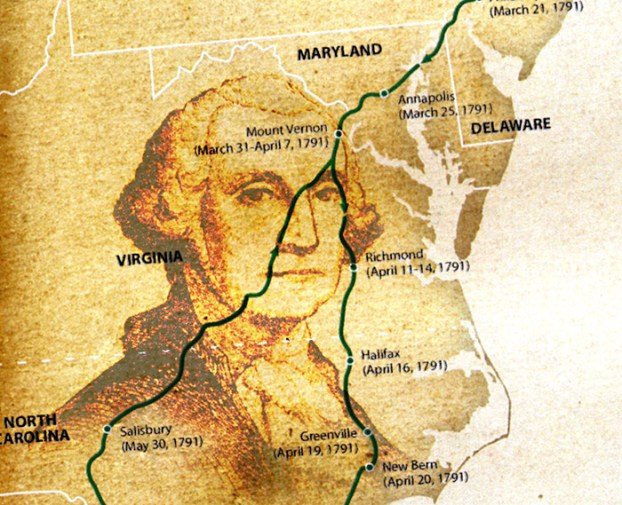 George Washington's visit to Salisbury 225 years ago is being recreated today in downtown Salisbury.

Laurels to today’s re-creation of George Washington’s visit to Salisbury 225 years ago. Washington was serving his first term when his Southern Tour brought him through Piedmont North Carolina. There were, of course, no black limousines or Rayban-wearing Secret Service agents with the nation’s first president. When he returns to town today — a re-enactor, that is — Washington will ride in a ceremonial white carriage. The celebration sponsored by the Rowan Museum will focus on the area around Fisher and Jackson streets. Washington is scheduled to address the throng at Rowan Public Library at 11:35 a.m. and give his farewell at 3:45 p.m. outside First United Methodist Church. Organizers have gone to great pains to get authentic musicians, militia, artisans and more to be part of the daylong event — and to accommodate the predicted rain. Don’t let the weather keep you away; this is bound to be a memorable experience.

Dart to negative stereotypes and the cable TV companies that earn them. Charter Communications Inc. has bought Time Warner Cable and Brighthouse Networks, making Charter the second largest cable company in the United States. Time Warner, which serves much of Rowan, has a bad reputation when it comes to customer service — the worst in any industry in 2015, according to the American Customer Satisfaction Index. Time Warner Cable’s name will change to Spectrum, but will customer service improve under this new monolith? That remains to be seen. Meanwhile, part of Time Warner Cable’s legacy here will be the birth of Fibrant, the city’s broadband service. Who knows how long Salisbury residents would have been forced to wait for high-speed broadband otherwise?

Laurels to high school seniors across Rowan County as they march toward graduation three weeks from today. Attending a senior awards assembly can renew a person’s confidence in Generation Z, as some call these young people. They may seem addicted to smartphones, but these teenagers have grown up in the years after 9/11 and Hurricane Katrina. Generation Z “has had its eyes open from the beginning, coming along in the aftermath of those cataclysms in the era of the war on terror and the Great Recession,” the New York Times says. Rowan County is sending these resilient young men and women into the military and off to college, often with scholarships in hand. The community honors the 2016 graduates for their scholarship, athleticism, integrity and service. They have persevered.