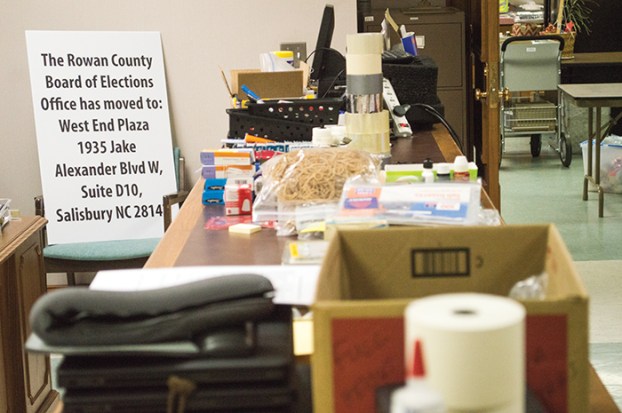 Josh Bergeron / Salisbury Post - Various office supplies sit on a counter in the Rowan County Board of elections office. Behind the supplies is a sign that will be used to tell voters the Board of Elections has moved to the West End Plaza. Josh Bergeron / Salisbury Post – Rowan County Board of Elections Employee Jennifer Ward works at her desk in the county’s administration building. The Board of Elections is preparing for a move to a new office at the West End Plaza.

SALISBURY —  Two Rowan County government departments are gearing up for a move that will affect early voting for June 7 primary elections.

Early voting for the June 7 primary starts Thursday, but it won’t be in the usual spot at the Rowan Public Library Headquarters in Salisbury. Instead, the site for early voting will be the West End Plaza, where the Rowan County Board of Elections and Veterans Services department are moving.

The Board of Elections office will be located adjacent to Badcock Home Furniture. Rowan County Elections Specialist Laura Russell said she will place signs at the exterior of the building to guide voters into the polling location.

Russell said the move will become permanent on May 31. For a period of two days next week — Thursday and Friday — only early voting will occur at West End Plaza. She said Rowan residents who need to visit the Board of Elections for any other reason should go to its office at the county administration building — 130 West Innes Street.

After May 31, the Board of Elections will no longer be located in the county’s administration building, and County Manager Aaron Church said other county employees will move into the space after renovation.

The move may complicate an election that’s already projected to result in minuscule turnout numbers. Several candidates running in North Carolina’s 13th Congressional District race have settled on 5 percent as the turnout number for elections on June 7.

The Board of Elections’ move is part of a project initiated by Rowan County commissioners in Dec. 2013, when they purchased the Salisbury Mall. The intention was to move government departments into the facility. Construction work on the first phase of construction, which cost Rowan County about $1.8 million, is nearly complete.

As part of the construction work, Rowan County renovated office space for the Board of Elections and Veterans Services departments. A new roof is also being installed on the West End Plaza.