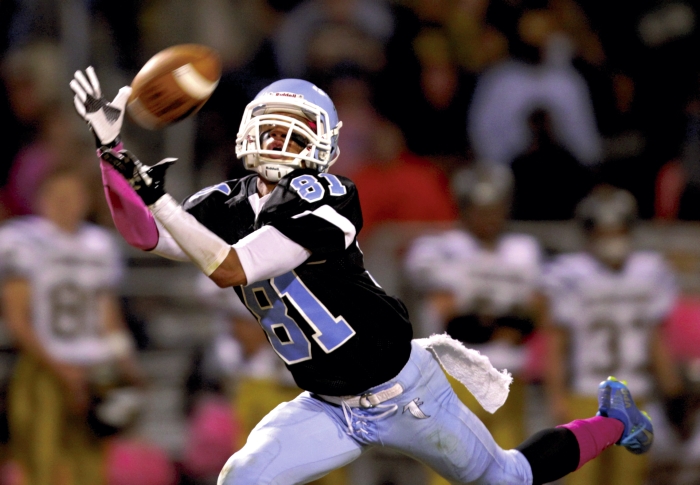 James Sipes/for the Salisbury Post ... Receiver Juwan Houston pulls in a 41-yard pass during last season’s game against Concord on Oct. 23. Houston is planning to continue his career at Guilford College.

MOUNT ULLA — It was October 10, 2014, when West Rowan receiver Juwan Houston, who is headed to Guilford, struck a blow for little guys everywhere.
In the Falcons’ 50-31 win against Central Cabarrus, Houston, all 5-foot-8, 145 pounds of him, caught five passes thrown by Kacey Otto and Harrison Baucom and took four of them to the house.
Houston’s touchdowns covered 37, 23, 54 and 45 yards. There also was a 47-yard reception that he didn’t score on.
It all added up to the biggest receiving game in West history — 206 yards — and Houston became only the third Falcon to catch four TD passes in a single game. The first was Horatio Everhart in the 2000 playoffs against High Point Andrews. The second was Jarvis Morgan in a 2011 romp against East Rowan.
Houston didn’t have a monster game as a senior, but he was a more consistent threat. He caught a touchdown pass in eight different games. He had a 38-catch, 752-yard season on his way to All-South Piedmont Conference and All-Rowan County honors.
“Juwan’s speed was a huge weapon,” West coach Joe Nixon said. “He opened up a lot of things for us. He became a good route runner, in addition to his speed and he has good hands. He didn’t drop many.”
Houston’s season high for catches as a senior was seven against Davie. His biggest yardage game was 124 yards in the playoff win against Carson. He had TD catches in both games against Carson and also had a big TD reception in the playoffs against South Point.
That 79-yard play against South Point was the home-run ball that lifted the Falcons, who were trailing 21-7, back into that third-round game.
“My best games came in some of the toughest games,” Houston said. “Carson, Concord, South Point. Those were games where we had to show that we could really play.”
Guilford hopes Houston can continue to make big plays happen in college football. Guilford should be a good fit, and at that the Division III level, Houston’s exceptional speed should more than compensate for his modest size.
“Guilford talked to me a lot about (former Davie star) Adam Smith and the great career he just had as a slot receiver for them,” Houston said. “They’re hoping I can come in and do some of the things that he did.”
West offensive lineman Shane Barber is also headed to Guilford. That’s a plus for both former Falcons.
“It’s always good to see a familiar face and it means they’re going to know someone on the team right from the start,” Nixon said.
Houston became a receiver relatively late. At first, concerns about his size limited him to special teams. Then he got a shot at free safety.
“Then in eighth grade they made me a receiver,” Houston said.
It’s worked out well. His 1,198 career receiving yards — in just two varsity seasons — put him seventh on West’s all-time list. He surpassed Brantley Horton by a single yard for seventh.
While Houston said his focus will be on football, Guilford also has a track and field team, and Houston could wind up being a factor in that sport as well.
“I run 40s in the 4.4s,” Houston said.
Houston’s wheels, plus fine technique, have made him one of the top hurdlers in 3A.
He placed third in the 110 hurdles at the state outdoor championships as a junior and he was second in the 55 hurdles in the state indoor meet last winter.
Last Saturday, he won the 100 hurdles in the 3A Midwest Regional. Houston’s best 110 hurdles time this year is 14.39 seconds. He’ll be a contender in Friday’s 3A outdoor state championships in Greensboro.
Houston also has been a force on West Rowan’s sprint relays. He’s run 100 meters in 11.14 and he’s been clocked at 22.44 in the 200.
After his track season ends on Friday, Houston will start working toward being the best slot receiver that he can be.