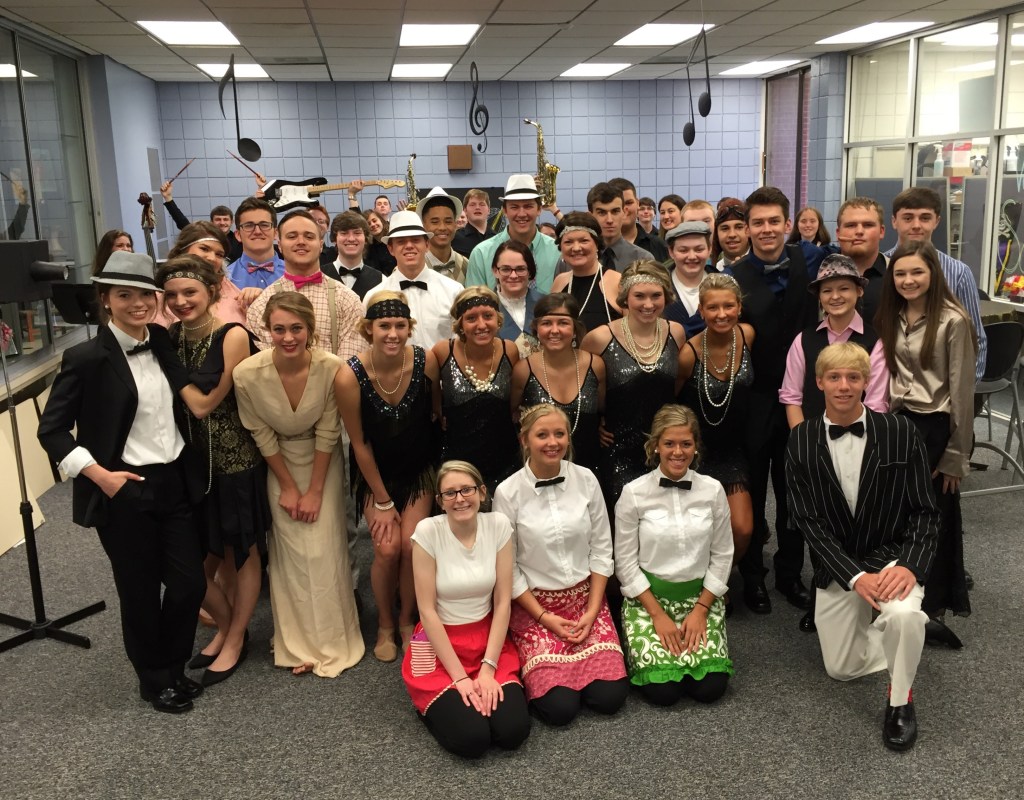 GRANITE QUARRY — When the 1920s comes to mind, thoughts of partying, singing and dancing come along with it; that’s just what Mrs. Fontenot’s first and second period classes at East Rowan portrayed in a project-based learning production “Party Like It’s 1929.”

Classes that would benefit most, such as American history and American literature classes, were invited on a field trip — no gas money required — to the school’s media center, which had been turned into the Cotton Club as well as other various landmarks of the Jazz Age. Students invited their parents as well.

According to Fontenot, “Project based learning provides students with an excellent opportunity to extend their learning. Thanks to technology, students are able to extensively research, watch videos, view fashions of that era, learn the dialect and vernacular for their particular roles, and showcase their individual talents as they work collaboratively. It really enhances their learning beyond the classroom.”

As students, we assumed the roles of different actors, musicians and other great iconic figures of the 1920s. Strong orators became curators, cheerleaders and dancers became flappers, singers became famous vocalists, students who love to read became famous poets and writers, and of course, we cannot forget about famous sports figures — all emerging out of our interests and talents as we were given the freedom to choose how each of us would contribute to this presentation.

When students were not performing their segment, they were to assume the role of wax figures where they posed silently awaiting their turn to steal the show. This gives the illusion of some sort of a talking museum – much like the popular movie they’re all familiar with, “Night at the Museum.”

Fontenot worked with Mrs. McNeil, our band teacher, and incorporated our school’s talented jazz band into the production. Also, our foods teacher, Mrs. Tucker, helped students bake and serve snacks to all attendees as well.

Fellow classmate and “scat daddy” Sawyer Russell said, “I thoroughly enjoyed humoring the audience and watching my fellow peers perform their exhibits. It was truly a memorable experience.”

According to Kira Cortorreal, a student from Fontenot’s second block, “The 1920s museum was a great experience. It was a way to learn about famous people, their achievements, and the historic events that took place during that time period. It was also a way to express our creativity and see what it felt like to be in the 1920s. I’m thankful I was given the chance to participate.”

Owen is a junior at East Rowan High School.