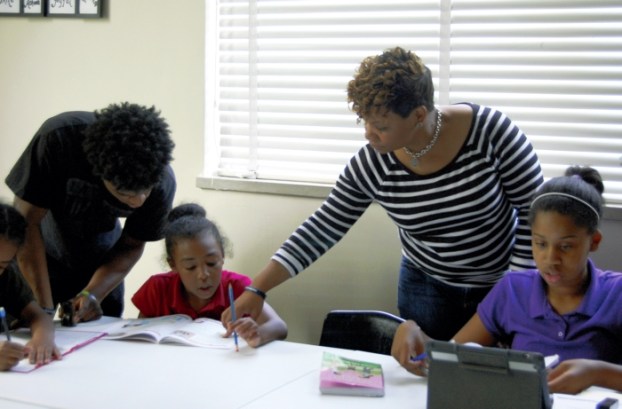 Amanda Raymond/Salisbury Post Da’Sean Herndon, vice president of COMPASS in the black t-shirt, and Alisha Byrd, founder of Gemstones Academy in the striped top, help students with their homework after school as part of the Gemstones Academy and COMPASS youth program.

SALISBURY — Alisha Byrd is not the kind of person to sit back and let others deal with community issues.

She creates her own programs and organizations to help solve problems and fill in gaps she sees in the community.

Alisha Byrd lives a life that is the definition of community service.

Byrd was born and raised in Salisbury and comes from a large line of Byrds in Salisbury. Her grandparents, who will be married for 72 years in August, had 14 children. They have more than 100 grandchildren.

“I have a big family of support,” Byrd said.

“My birthday present to myself was to incorporate my last name and start a business,” she said.

Under the company, Byrd is using her 12 years of experience in human resources for Byrd Staffing, an agency that offers to fill staffing needs for companies.

Byrd said there are no African-American staffing agencies in Salisbury.

“Being an African-American female bringing this type of business to the community is awesome,” she said.

One part of the staffing agency is “A New Beginning,” which is aimed towards helping people with criminal records find employment.

She will offer resumé workshops, mock interviews and other resources to help rehabilitate and transform those with criminal backgrounds. She is also offering resumé help to anyone in the community who is looking for a job.

Byrd said she wanted to give people opportunities to SOAR — succeed, overcome, achieve and renew.

The company is up and running, and Byrd said she is looking for any companies that need temporary workers.

There will also be a human resources consultant component. Byrd is available to lead training seminars and revise policy and procedure manuals for different business.

Before starting a company focused on helping others, she had to work on herself a little first. She wrote a book called “Even Me” in 2010 that started out as a journal.

“Before I knew it, it became pages and pages about my life,” she said.

Byrd was nervous about publishing something that was so personal. She said it featured “the good, the bad and the ugly” of her life. But she published it because she thought it might help others going through similar issues — feelings of unworthiness, single parenthood and loss.

She said the whole writing process was therapeutic.

“I feel like if I had not gotten that out, I wouldn’t be where I am today,” she said.

She continued her writing career with “Gemstones: Embrace her, Become her, Love her” in 2013.

The book follows eight gemstone-named women who come from different backgrounds and build a support system for themselves when they meet in college.

Passion for the youth

It was the “Gemstones” book that inspired Byrd to create Gemstones Academy, something she is well known for in the Salisbury area.

Gemstones Academy is a program for students in grades 5 through 12 with workshops, seminars and mentoring that focus on leadership, education, self-esteem and etiquette.

“I’m very passionate about youth and young ladies,” she said, adding she also has a heart for the young men in the community, which is where Alex Clark stepped in.

Tamia Brown, the vice president of Gemstones Academy, said she was skeptical about joining in the beginning.

“At first I didn’t know what I was getting into,” she said.

She said after one year, she gained leadership skills, boldness and how to “express herself in an appropriate manner.”

Da’Sean Herndon, vice president of COMPASS, said the program has taught him confidence.

“I used to be shy and nervous whenever they called on me,” he said.

Now he is able stand up and express his ideas when called on.

Shonda Lowery has her third grade twin girls, India and Envy Robinson, in the Gemstones program. She said before they started the program, her girls were not doing well in school. After Gemstones, one of the girls received a Most Improved Award and the other is where she is supposed to be academically.

The Trend-Setter program is a new component of Gemstones and COMPASS.

Clark said people follow trends whether they are positive or negative, so they wanted the children they work with to set their own trends.

Byrd and Clark are offering a Trend-Setter Technology Summer Camp for students from the second to 12th grade to learn computer coding, web design, graphic design and mobile app development.

College students Darius Jackson and Jamone Kelly, owners of Mehe, a business they are in the process of creating to help other business with mobile app development, are helping with the program.

Byrd said she got her entrepreneurial spirit from her grandfather, who owned his own business. She said she wanted to both build on the legacy that her family has left for her and leave a legacy that her daughter could be proud of.

The Winston-Salem State motto has always stuck with her — “Enter to learn, depart to serve.”

“It’s always what can I do to make a difference in the lives of others, as well as my community,” she said.

By Shavonne Walker shavonne.walker@salisburypost.com SALISBURY — Sharon Peck danced barefoot at the Rowan Blues & Jazz Festival like nobody was... read more