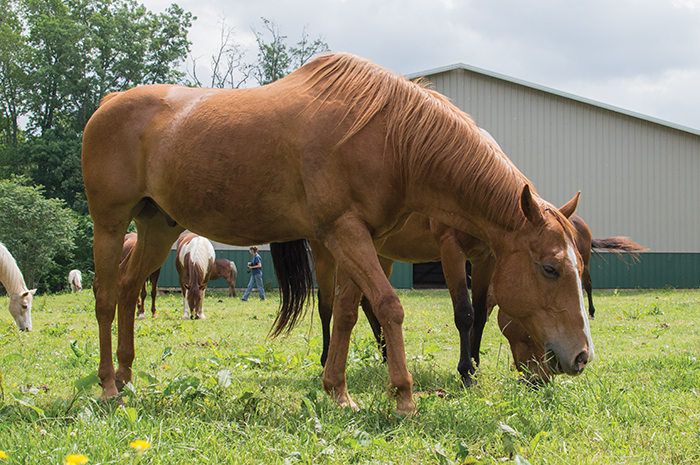 Josh Bergeron / Salisbury Post - A horse walks through a grassy field at the Horse Protection Society in Rowan County. The nonprofit group currently takes care of more than 30 horses.

SALISBURY — When it comes to the Rowan County Animal Shelter, there’s no shortage of criticism, but the details of a recent abuse case are a bit more nuanced than they’ve been described by local animal advocates.

Earlier this year, the Rowan County Animal Shelter began investigating a potential incident of abuse at the nonprofit Horse Protection Society, which rehabilitates sick, abused and neglected horses. Currently, the nonprofit has more than 30 horses on its property. It has housed as many as 51 horses on its expansive property at once. The death of multiple horses is at the center of the recent abuse investigation. Charges, however, were never formally filed. In an investigation that lasted multiple months, no evidence of abuse was discovered.

On social media, in a recent public forum and through various other avenues, animal advocates have used the case to criticize Clai Martin, the director of the county’s Animal Enforcement Division. When the county recently shifted Martin from shelter director to the newly created Animal Enforcement Division, animal advocates brought up the abuse case as an example of why Martin should have been fired instead of laterally moved to a new position.

Williams, who initiated the abuse complaint, and other animal advocates also said the county employee was also taken off the case by Martin as she was about to file charges. That’s also untrue, Martin said.

To go with the abuse complaints, a new horse rescue group has been formed in Rowan County that involves volunteers who were previously involved with the Horse Protection Society. Williams, however, isn’t a member of the group. A member of the group who spoke to the Salisbury Post about the case declined to provide her name and asked not to be quoted.

Horse Protection Society Director Joanie Benson said the abuse allegations stemmed from a plan submitted by several of the organization’s volunteers in 2015.  The plan would have isolated 10 horses on two acres. Benson said the volunteers became upset when she told them no.

“I’m not one to yell and scream and holler, but it just was not going to work,” she said.

Williams said she simply never received a rational explanation for Benson’s denial but agreed that the downward spiral began in July 2015.

Eventually, the volunteers decided to disassociate with the Horse Protection Society.

After a horse fell on concrete and later died in January, Williams said she decided to report the Horse Protection Society for animal abuse.

An animal control officer named Jessica Sartain was put on the case. On Jan. 16, she sent an email that said “I spoke with my director just a few mins ago. We are all in a agreement that (Joanie) has committed animal cruelty which is a felony now.”

An email sent to Sartain just a short time earlier does not show that Martin agreed animal cruelty had been committed.

“Ok, I trust you and Tommy on this,” Martin’s email to Sartain states. “If (you) both feel we have a strong case, then I support your decision. Hope we have plenty of witnesses that will testify along with the (veterinarian) if needed.”

After sending her email, Sartain asked for pictures of horses from some of the animal advocates who expressed concerns about the Horse Protection Society. Sartain also told a veterinarian that she would file a warrant to seize medical records.

“I will be going Tuesday to file this action against Mrs. Benson with an arrest to be made,” she said in an email on Jan. 17. “Then I will be filing a warrant to seize medical records for you as well.”

A veterinarian would later provide a statement to Rowan County Animal Control stating that all horses were found to be in healthy body conditions.

“Based on my visual inspection of the facilities and (the veterinarian’s) examination, we concluded that no charges would be brought for animal cruelty and that in fact, the horses under Joanie’s care are receiving adequate nutrition and medical treatment,” Martin said.

Williams and other animal advocates have alleged Sartain was taken off of the case by Martin before abuse charges could be filed against the Horse Protection Society. Instead, more officers were added to the case.

“We determined as a department that the substantial nature of animal cruelty investigations requires experienced investigators for consistent and proactive outcomes,” Martin said.

The investigation is now considered closed. Williams, however, said Rowan County could have done a better job of communicating with animal advocates during the course of the investigation.

Since the investigation started, a new horse rescue group has been created that includes volunteers who worked with the Horse Protection Society. A representative of the group, however, said it’s not connected in any way to the abuse allegations.

Benson said she welcomes a second horse rescue group in Rowan County. She said there’s space and a need for more than one group.