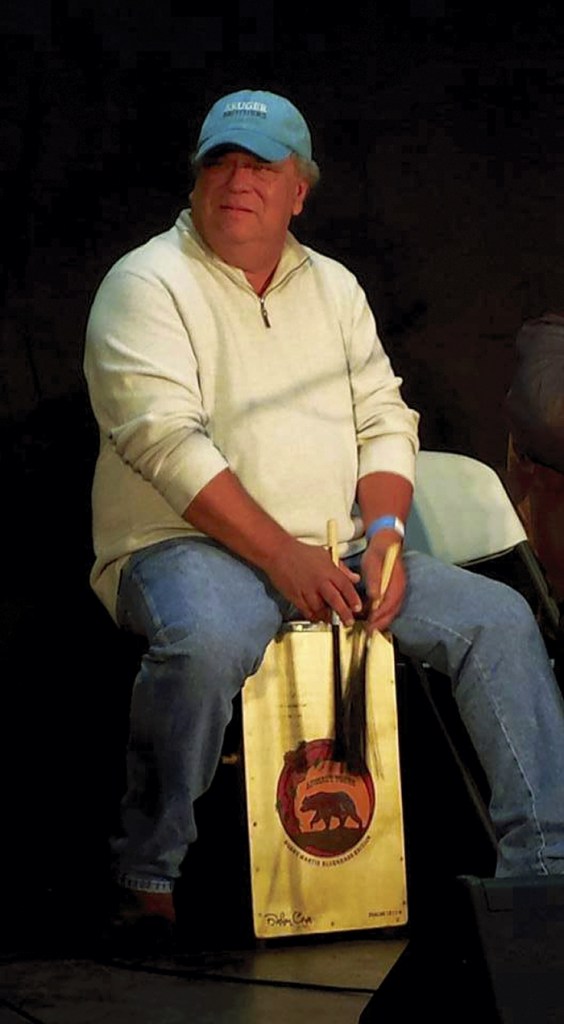 The Union Grove Fiddlers Convention, being held this weekend, May 13-14, is dedicating this year’s festival to Salisbury native Bobby Martin, the original Bluegrass Drummer. Son of Sam and Ruth Martin, Bobby made his home at Union Grove for many years prior to his passing. He pioneered himself into one of the finest Bluegrass Drummers of our time. John Lawless of bluegrasstoday.com wrote: “..one of the more recognizable personalities at bluegrass festivals in Virginia, Tennessee and North Carolina. Bobby Martin, known to jammers across the south as “The Bluegrass Drummer”…”

His sister, Glenda Martin-Fuller, shared a story of when Bobby was just a toddler. He would stack books and get sticks from the yard and sit moving the books around until he perfected the tone he was seeking. Bobby often spoke of the times as a child when he would travel with his family to Fiddler’s Conventions near and far. Debbie Goodman says: “Bobby often told me of times when he and his family went to conventions and how he would sit at his father’s feet often listening to him play the mandolin. He told me how thankful he was to all the musicians at that time who always took time to help the young people learn the history of the music and offering up advice on playing and technics used. He always said that it is a blessing every time a young person would come up and sit and share the music with him, and how important it was to him to take the time with the young musicians about the music.”

Starting out with just his snare, sticks, brushes, pants leg and sometimes just brushes on a ole wooden chair, he worked out dynamics and tones to design his own cajon. Bonham Cajons now produces the Bobby Martin Bluegrass Edition Cajon, called Ancient Tones, with his logo. He contacted his lifelong friend Debbie Goodman to create his logo, requesting it reflect his Cherokee Heritage, the bear, his home state of NC and his faith with his favorite scripture Psalms 121:1-6. To learn more about Bobby and his cajon, visit www.bluegrassdrummer.com

Bobby traveled the US and Europe playing with the Kruger Brothers. He was also seen often on stages with Charles Welch, Wayne Henderson, Steve Kilby, Tut Taylor, Doc Watson, John Marler and the Moore Brothers Band, to name a few. Most recently he performed and recorded with Rex McGee and Kripple Krunk.

After the festival’s preliminary band contest, starting at 6 p.m. on Friday, May 13, Rex McGee and the members of Kripple Krunk will be hosting a Celebration of Bobby’s life and the music he loved. Bobby felt it important to pass on the music to the youth who surrounded him often. He was often found talking music history, tunes and enjoying the music with the young musicians. Many coming to be part of the Celebration include: The Moore Brothers, Mason Via, Liam Purcell, Sylvia McGee, Presley Barker, Lucas McGee, Kitty Amaral, Gus McGee and more.

As the evening progresses, many of the musicians that Bobby performed with are coming to be part of their fellow musicians celebration including The Goodfellers, Maynard Holbrook, Wayne Henderson, Steve Kilby, Charles Welch, John Marler, The Jones Sisters, Eric & Carrie Webster, Dale Mills, Mark Ireland, Mark Wingler, Clay Lunsford, Members of Brynmor, Acoustic Citizens and more.

Rex McGee with Kripple Krunk will close out the evening with a concert in his honor. Kripplekrunk started when multi-instrumentalist Rex McGee convinced friends from his annual trips to the Galax Old Fiddler’s Convention to do a jam session styled studio recording featuring original instrumentals. Some of those tunes go back to the 1980s when mandolin player Danny Knicely and guitarist John Garris pitched camp near Rex and produced a magnetic draw for the more adventurous players visiting this festival. Galax had a tradition as a nuclear core of Appalachian string band music, but a dedicated group of fans sprung up who were always ready to see what holy cow would get tipped over next. Sometimes perfectly good old-time and bluegrass tunes were transformed, other times popular music of the day was given bluegrass styled treatments.

This went on for years and eventually got the attention of a young Nate Leath, fiddling his way through middle and high school and finally Berklee School of Music. Dennis Lee had developed his chops for years and proved to be one of very few acoustic bass players capable of stepping outside easily labeled musical worlds. Bobby Martin sat down with the group in 2011 and brushed rhythm, ancient tone and sometimes pure energy from a cajón, a six sided, box-shaped percussion instrument originally from Peru. After the 2012 meeting at Galax the encouragement from fans spurred Rex to set up the recording session. The project would be a veritable sampler of stylistic sampler echoing bluegrass, old-time, new acoustic, Celtic, cajon, R&B, southern rock, swing, jazz, and world music . . . sometimes all in one tune. To learn more about Kripple Krunk, visit www.rexmcgee.com

In addition to the Celebration of Music, there will be a fundraising booth to assist with expenses. You can make a gift donation on the opportunity to win a Bobby Martin Bluegrass Edition Cajon provided by Bonham Cajons. Carolina Folkworks of Salisbury has donated a fiddle with case/bow. Kruger Brothers have donated two signed CDs.   True Sound Entertainment is offering a $250 contract for deejay services. There will also be T-shirts with Bobby’s logo available, additional Kruger Brother CDs, Kripple Krunk CDs, and various CDs from many of the musicians. Guitar Strings from Main Street Music and Loan in North Wilkesboro, a handmade necklace from Eva Fritsch and lots more. Be sure to stop by.

Michael Lane of Bluegrassphotos.com will be the official photographer and videographer for the show. He will also be videoing all of the performances along with Vivian Hopkins. Debbie Goodman will serve as event emcee.

Truly a night of fabulous music celebrating Bobby’s life and the music he loved. Tickets are $10 for Friday night with free tent camping. Two day tickets for the Fiddlers Convention is $20 with free tent camping. To make reservations for RVs and campers or to learn more about the Union Grove Fiddler’s Conventions competitions, visit www.vanhoyfarms.com or call 704-539-5493.