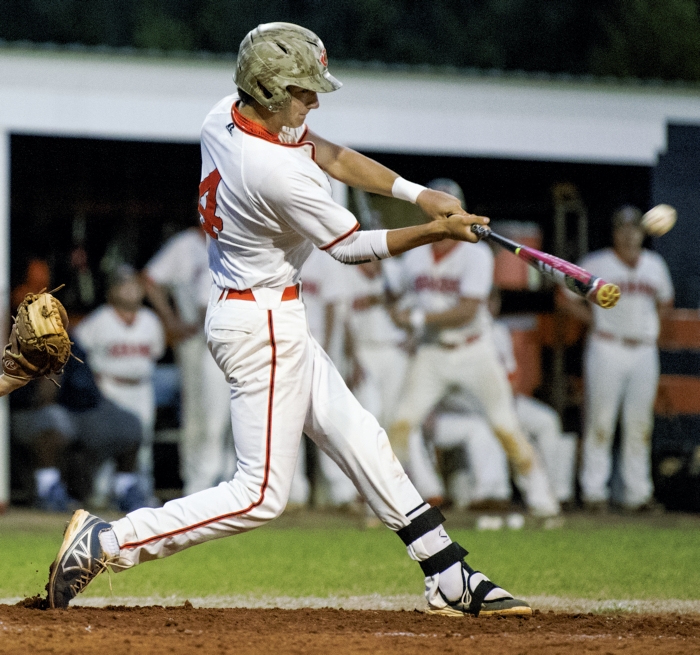 ALLISON LEE ISLEY/SALISBURY POST... Carson’s Owen White, shown hitting a home run on April 21 against NW Cabarrus, had a homer and two doubles last night as the Cougars defeated Freedom, 10-1, in a first-round state 3A playoff game at China Grove.

CHINA GROVE — Carson baseball coach Chris Cauble rolled the dice and won his gamble on Wednesday night.
The Cougars also rolled, pounding Morganton Freedom, 10-1, in the first round of the 3A playoffs.
Cauble sent his No. 2 guy Cameron Prugh to the hill and saved ace Owen White for Friday’s game at powerful Waxhaw Marvin Ridge (23-4), the defending state champs.
“It’s something I haven’t done much,” Cauble said. “I’ve almost always played it on the safe side. Usually you don’t try to save a pitcher in the playoffs because you’ve got to win that first game. But the way Prugh has pitched lately made it a much easier decision. Prugh hasn’t been a No. 2 the last few weeks, he’s been more like 1-A.”
Prugh ran into trouble immediately when Lyle Holland’s double and Phillip Pieto’s single gave 18th-seeded Freedom a 1-0 lead in the top of the first.
“I got a little doubtful in that first inning,” Cauble said with a smile. “I was worried a little bit, but then Prugh settled in.”
The key to the game was the bottom of the first. That’s when Carson, seeded 15th in the West bracket, struck back for two runs against Freedom lefty Elijah Dale.
“It was very big to jump back on them,” White said.
Leadoff man Michael Morrison got a hit and scored one of his three runs. White, who did serious damage with his bat, keyed the inning with a long double and scored one of his four runs.
When Prugh headed back to the mound, he had a 2-1 lead. He’s a steady, pound-the-strike zone right-hander and the swift, 1-2-3 inning he had in the second pumped up his confidence.
“I’ve been able to string some good starts together lately, and my mindset was to keep putting the ball in the strike zone,” Prugh said. “I’ve got utmost confidence in our defense.”
Prugh made a fortunate play in the second inning that probably assured him he was going to have a good night. He made a basketball spin move to knock down a ball that might’ve gotten up the middle.
“That was just lucky,” Prugh said. “I spun around and knocked that ball down behind my back. My glove fell off, but I got to the ball in time.”
Carson took control in the third when White launched his fifth homer over the left-field fence to push the lead to 4-1. It was the talented sophomore’s fourth homer in his last seven games.
“Just seeing it well, starting with BP, and hoping to get a few hits tonight,” White said. “On the homer, it was a 2-0 count. I knew he might groove one in there.”
After No. 9 hitter Brycen Holshouser sent a two-out, two-run single skipping into left field in the fourth, Carson led, 6-1, and it was clear that Prugh and the Cougars were going to make Cauble’s gamble pay off.
White’s second double of the game and 13th of the season opened the fifth. Brandon Newton’s RBI single with two men out sent White home to make it 7-1.
“The lefty was throwing us a lot of outside fastballs to start with, and then he tried to mix in some change-ups and he was bringing more fastballs inside,” White said. “But we squared up a lot of balls.”
Carson pulled away with three in the sixth, scoring runs on hits by Tanner O’Neal, Morrison, Caleb Hall and Ryan Bearden and a bases-loaded walk to freshman Garrett Alewine.
“We all played good tonight,” said O’Neal, who steered a looper to right field for his first hit of the season. “We were a unit.”
The game would’ve ended in the sixth via the 10-run rule, but Freedom right fielder T.J. Benjamin, who battled a hamstring issue most of the season, made a remarkable catch and forced the Cougars to go the distance.
Prugh threw only 74 pitches in his six innings. He struck out eight, walked none and allowed four hits. He raised his record to 6-1 and lowered his ERA to 2.57. He’s struck out 50 while walking only 12 in 51 2/3 innings.
“I’ve got no problem with how we played,” Freedom coach Clint Zimmerman said. “Carson’s just a really solid club. Their pitcher was good, their catcher (Bearden) did a great job working with him, and they sent a tough lineup to the plate. Our lefty battled, went right after them with everything he had, but they hit balls where our fielders weren’t. That’s just baseball.”
Tanner Christy pitched the seventh for the Cougars. Freedom (12-12) put the first two men on with a walk and an error, but Christy retired the next three.
A sensational catch by first baseman Grayson Whicker on a foul pop highlighted Carson’s defensive night.
Carson won its first-round playoff game for the seventh straight season. The problem has been the second round. The Cougars have gotten past Round 2 only twice – in 2012 and 2014 — and that explains Cauble’s willingness to take a chance.
“Now we’ve got a date with Marvin Ridge on Friday, and it’ll be about the fourth time we’ve played them in 10 years,” Cauble said. “We’ve had our battles with them. It’s always highly competitive and intense. They play with fire and emotion and I believe we will too.”