Life in the Carolinas: Ten governors, violence and wild turkeys 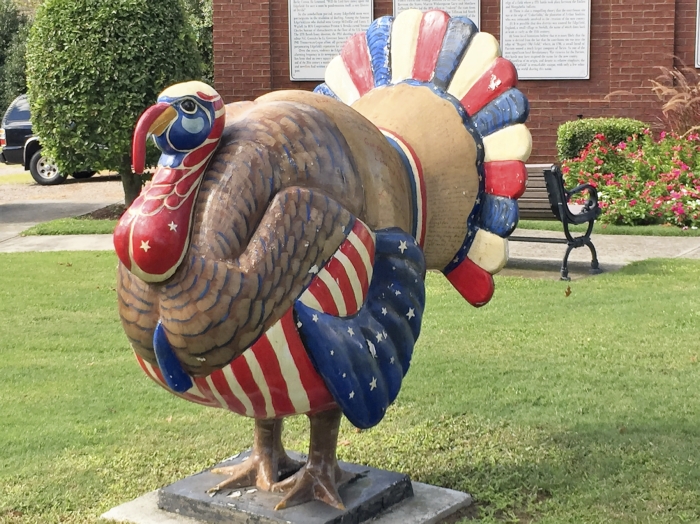 One of eight painted turkey statues that greet visitors to the town square of Edgefield, S.C., the home of the National Wild Turkey Federation. Submitted photo

EDGEFIELD, S.C. — My attraction to history and town squares has taken me to many interesting places.

It was by chance that I came across the historic town square in Edgefield, S.C. At first I noticed the turkey statues, and I quickly found a parking spot and started taking pictures of the colorful turkeys.

As I was making my way around the square, the past was beginning to reveal itself with old buildings and well placed information about the history of the people who were born in the area.

Another significant thing that got my attention was a mural which boasts 10 South Carolina governors, starting with Andrew Pickens, who served as governor from 1816-1818, up to Gov. Strom Thurmond. Thurmond was elected in 1946 and then went on to serve the U.S. Senate for a total of 47 years five months and eight days, which currently ranks him the third-longest serving member of the Senate.

As I continued around the square, I discovered an area with historic information boards. As it turns out, Edgefield has had a reputation for violence from its beginning.

Beginning with the bloody Cherokee war of 1760 and general lawlessness, the people of Edgefield seemed well suited for any encounter or skirmish. Preston Brooks was born in Edgefield County and attended South Carolina College, now known as University of South Carolina. However, he did not graduate; he was expelled for run-ins with local law enforcement. This, however, would not keep him from serving in the S.C. House of Representatives in 1844 and then go on to the 33rd U.S. Congress in 1853.

With the advancement of his political career, it would be logical to think that his temper might become more balanced; however, this was not the case. It was in 1856 when Sen. Charles Sumner from Massachusetts was speaking against the admission of Kansas to the Union that Brooks took great offense when his relative Sen. Andrew P. Butler was insulted by Sumner.

A few days after the event, Brooks went to Sumner’s office and beat him nearly to death with a cane. He did so, he said, because Sumner was not a gentleman and unworthy of a duel. Brooks did resign, but was re-elected in the following election.

And then, there is the story written by Parson Mason Locke Weems and retold by others about Rebecca Kennedy, who was born around 1765.  She was known by most as “Becky.”

Becky’s father, James, had a land argument with three of his neighbors. He came to the home of Becky and her husband, John Cotton, to lay low for a few days. However, the angry neighbors followed and, upon entering the home, they shot James Kennedy in front of his daughter. John did nothing to try to help his wife’s father.

Becky’s fury grew over time and one night she brought the axe from the woodpile and as she stood over her sleeping husband her revenge found its mark on John Cotton’s head.

Becky and her brother, David, dragged the dead body to the potato vault and then she set off. She was captured in Kings Mountain, and she was tried for murder. However, it is said that the all-male jury was spellbound with her charm and beauty, so she was acquitted of all charges. Becky had other men in her life, and they too were met with miserable ends.

It was Becky’s brother, Stephen, who would finally administer justice. On May 5, 1807, he spotted her on the courthouse steps flirting with a handsome young man. He knew what fate would come. Without hesitation, he picked up a rock and with one swift blow Becky fell on the steps of the court and died in a pool of her own blood.

There are many macabre stories in Edgefield’s history that we can visit in the future, but I think it is best that we get back to the turkeys.

The National Wild Turkey Federation was formed in 1973 and is in Edgefield. They have more than 230,000 members worldwide and they put forth a great effort for wildlife conservation. When the organization started there were approximately 70,000 wild turkeys in America, and now there are more than 7 million. The federation is also responsible for the eight turkey statues that greet visitors of Edgefield town square.

There are many mysteries in Edgefield, it seems. There are even six principal theories on how it got its name. I’ve been invited for another visit. I think I’ll go. Ralph Scurry told me they have a great history class that I can join when I visit.

Carl White is the executive producer and host of the award winning syndicated TV show, “Carl White’s Life In the Carolinas.” The weekly show is now in its seventh year of syndication and can be seen in the Charlotte viewing market on WJZY Fox 46 Sunday mornings at 10 a.m. For more on the show visit www.lifeinthecarolinas.com. You can email White at Carl@lifeinthecarolinas.com.