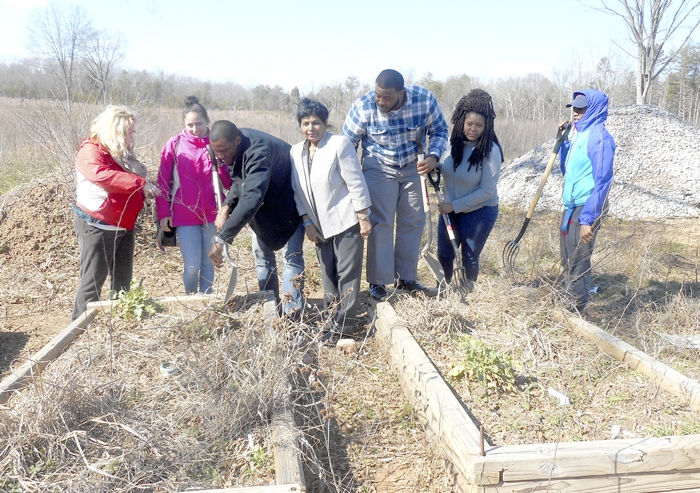 I am a professor of biology and have a special interest in this forest/farm and its future. I wanted to know the history of this forest. State Alexander, special assistant to the president of Livingstone College, told me to ask Barbara Neely, math lab coordinator at Livingstone, for any information on the history of land use.

Neely spent her early childhood in the farm, living with her father, Theodore R. McClain, who was the overseer of the farm, and her mother, Eva M. McClain, who was the pastry chef at Livingstone’s cafeteria. I was pleased to know that the cafeteria in the 1940s and ’50s, with a student population around 350, used the farm to meet the needs of vegetables and fruits in the meals. The vegetables such as corn, green beans, field peas, sweet potato, white potatoes, okra, tomatoes, peanuts, turnip greens, collard greens were grown by standard agricultural practices. Fruit trees included apples, peaches and grapes. The fruits were used in the cafeteria to make pies and cobblers prepared by Eva McClain. The surplus was canned and preserved to be used in the winter. Even molasses was made on the premises, with the sugar cane from the farm.

The farm had three homes, one occupied by McClain’s family and others by two staff members who worked on the farm. The surplus produce was given away to the campus staff and the residents in the community. The animals raised in the farm were chickens, turkey and hogs for meat. Few mules were used in agricultural operations.  McClain’s family moved from the farm after Theodore McClain passed away.

Now there is no trace of any homes, farm or pathways. The area remained uncultivated during the past five decades and became part of the city of Salisbury. Now, in the fall of 2015 and spring of 2016, the land has been cleared for planting. Grass has been planted in the entry way.

As a professor at Livingstone for the past 29 years, I shared my vision for the farm with Dr. Jimmy R. Jenkins and Alexander on several occasions. I submitted proposals to them on how this farm can be used to produce organically grown vegetables to promote healthy living that the holistic approach of Livingstone College proclaims. I suggested that the healthy vegetables and foods organically produced in the farm could be used in the cafeteria and the culinary arts program. I am a   botanist, horticulturist, environmental scientist, conservationist,  Master Gardener, and a  self-proclaimed  nutritionist, health guru and international chef.

I grow vegetables, including some medicinal ones in my one-acre home garden with the help of my husband  Rabe Sabaratnam.

I planted a successful vegetable garden at Faith Temple Triumphant ( FTT) Ministries in East Spencer in the summer of 2015. The church members  consumed the exotic vegetables and benefited from the medicinal properties of these vegetables.

The Livingstone farm/forest was used in a research project I conducted with two biology majors in 2010 and 2011.

Livingstone college students have used the LC farm/forest for field trips for my botany class since fall 2006.  The forest has been and will be used as an outdoor laboratory in teaching and a field site for research for Livingstone students in plant and environmental sciences and ecology. The farm was a valuable resource for studies related to forest ecosystems and wildlife. The wide variety of  tree species  available on location make this area suitable for long-term ecological research.

I was able to get a mini-grant from Strategies for Education, Diversity and Sustainability (SEEDS), a presidential award-winning program of the Ecological Society of America (ESA). The mini grant offered  $500 to teach hands-on horticulture skills to biology major juniors in the biodiversity and conservation class, taught in the spring semester.

I started the Ecology Club at Livingstone in 2003. The club has been  successful in promoting the programs and vision of SEEDS — to reduce the serious underrepresentation within the field of ecology of individuals from under-represented minority groups in science. ESA SEEDS has helped Livingstone biology majors in many ways.

The core SEEDS program components offer hands-on engaging experiences with ecology that exhibit the relevance and application of the science. Each experience also provides opportunities to interact with diverse group of ecologists and other motivated students to both broaden and deepen students’ understanding of ecology and potential careers. Its mission is to diversify and advance the ecology profession through opportunities that stimulate and nurture the interest of under-represented students to participate and to lead in ecology.

The Livingstone students who participated in SEEDS programs are enrolled in Ph.D. programs around the country.  A few others are working in the health industry. Two biology majors, Taylor Harvey-Fonville and Ebony Jones, attended the 2014 leadership meeting of the SEEDS at the Colorado State University, over a span of five days.

These students learned a lot about food security. They visited local farms in the area in Fort Collins. They shared their experience and knowledge with Ecology Club members and other biology majors at Liivingstone. Harvey-Fonville has been accepted in the veterinary program In the fall. This was her career goal all along.

Students enrolled in one of my classes visited the farm over the spring semester to prepare the soil and plant culinary herbs like rosemary, basil, thyme and other vegetable crops on raised beds laid out by Jon Barber of  Buy Fresh Buy Local, NC in the summer of 2015. These plots were used for planting in the summer of 2015 by the Culinary Arts program.

Dr. Sashi Sabaratnam is professor of biology at Livingstone College.