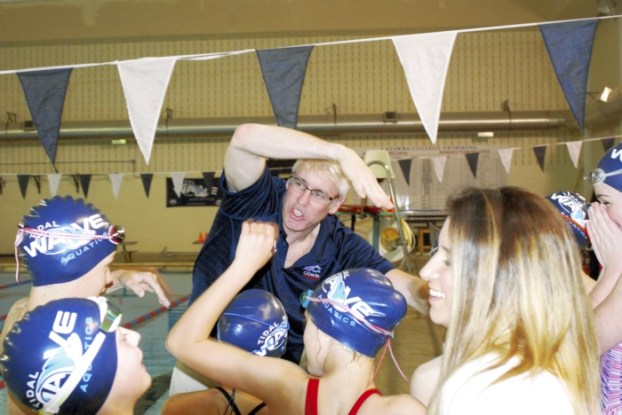 Dennis Davidson/Salisbury Post ... Michael Sever, swim coach at Catawba College and for the new Tidal Wave Aquatics club team, demonstrates a stroke to some of his young swimmers at Johnson Pool recently. Sever, in his first year at Catawba, was formerly an assistant coach at the University of Maine.

Tidal Wave Aquatics up and swimming

SALISBURY — Watch out, Rowan County, for the tidal wave.

The club operates under the USA Swimming umbrella, focusing on technical development and racing skills for all ages, including masters.

Sever says that he and assistant coaches Chris Morris and Shelby Pace share a passion for swimming and work tirelessly to inspire the minds and hearts of swimmers, fostering lifelong champions of the sport.

“We’re here for all ages, all levels,” said Sever, who arrived at Catawba last fall and has led the Indians through their first season under his guidance. “We’ve got development programs for our age groups and obviously, competitions.”

Sever explained that from the beginners to the most advanced swimmers, there are USA competitions and for the masters swimmers, U.S. Masters competition.

Sever also stressed that Tidal Wave is not intended to be competition for the long-standing Rowan Aquatic Club, which is based at Hurley YMCA, but just a different organization that hopefully, will make swimming even stronger in the county.

“It’s just two different organizations,” said Sever. “There, it’s YMCA swimming and while they do have a USA component to it, we’re strictly USA swimming. And like any club, there are different club philosophies, different coaches and coaching approaches — so we have ours and I’ve been long involved with USA swimming.”

Sever came to Catawba from the University of Maine, where he had served as an assistant coach since 2012. While at Maine, Sever was involved with all aspects of the NCAA I program.  During his three seasons, the Black Bears set 36 new team records and produced 33 honor scholar-athletes in 2015.

Prior to that, Sever was the head men’s swimming and diving coach at Rhode Island for one year.

Sever is a graduate of East Carolina, earning a bachelor’s degree in communications from the ECU School of Design.  He did post-graduate work in graphic design at the American College of London in England.

Sever was a member of the East Carolina swim team while in school, a three-year freestyle sprinter. Now an avid open water marathon swimmer, Sever is an active member and competitor in U.S. Masters Swimming.

One of Sever’s teammates on the ECU swim team was local chiropractor Andy Jeter. Now reunited, Jeter is in Tidal Wave’s master’s program. “Andy’s been a great advocate,” said Sever.

Sever and his wife, Victoria, have North Carolina roots. They have two children, Taylor and Cooper, both of whom swim for Tidal Wave.

“I’ve got family in Shelby, my wife has family in Greensboro and it was just time to come closer to home and be close to the family,” said Sever. “Our kids are 11 and 14 and we just wanted to have that time with everybody in the family. It’s a bit of a blessing to be here.”

Morris is also Sever’s assistant with the Catawba teams (men and women), so it was only logical to keep the college’s Johnson Pool busy with Tidal Wave Aquatics.

“I started a club when I was in Maine and I really enjoyed it,” recalled Sever. “A club here allows me flexibility to kind of build out the club and grow it the way that I like.”

Pace, the other assistant, is local, having swam for Salisbury High School and at Pfeiffer University.

“Shelby also swam for RAC,” said Sever. “She’s awesome. I think that a lot of the immediate success of our club is a testament to our great coaches — both Chris and Shelby.”

Tidal Wave is off and swimming with 12 members so far.

“I don’t know what the magic number is, I really don’t,” added Sever. “I think we have lots of opportunities for growth, so when I’m faced with too many kids, that will be a good problem to have. Really, the size of the team will depend on how much pool time we’re going to allocate to it. I mean, there’s a lot of stuff that happens here with the Catawba pool, and that’s great — it’s awesome that this pool gets a lot of use.”

Former Catawba coach Betsy Graham had a summer league program, swimming at both Johnson Pool and at the Country Club of Salisbury.  That team will continue, with Morris coaching it this summer.

But Tidal Wave continues throughout the summer as well.

“It’s year around on the competitions and in the summer, we’re going to have at least two meets a month,” said Sever. “In the winter, it just depends on everything — when the meets fall and when our meets at Catawba are scheduled.”

It’s obvious that Sever is passionate about USA Swimming, calling it the foundation of Olympic Swimming.

“USA Swimming has a lot of programs and places for the kids,” he said. “It’s a great opportunity for Rowan County to have a resource like this. It’s just a different flavor and a good opportunity.

“It’s something that I know,” concluded Sever. “It’s the waters that I navigate in well.”

By Mike London mike.london@salisburypost.com SALISBURY — It was 60 years ago when Pete Stout, recruited out of Haw River High... read more