Mother and teacher: Home-schooling moms say double duty a calling and ‘so worth it’ 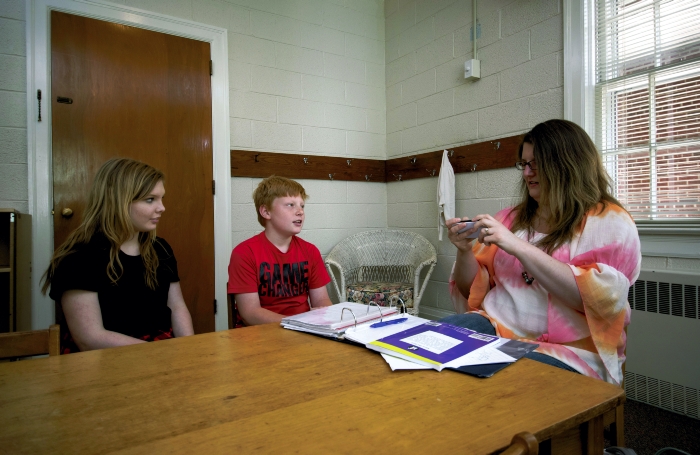 SALISBURY — There are many reasons why parents might choose to home-school their children, but for some, it’s a calling.

Kristy Wooten, home-school mom to two school-aged children, used to teach in a public school, but always knew that she wanted to home-school.

“I felt like the Lord was calling me to home-school mine,” she said, “ . . . in every school I’ve worked in, I’ve seen the children thrive when they were in smaller settings.”

When her oldest, 13 year-old Mary Beth, was born, Wooten quit her job to focus on her family. Wooten said it was very important to her to be “intentional” with the time she spent with her children. When asked if she missed her job, Wooten said she didn’t.

“I feel this is just as much work,” she said, “It doesn’t pay in U.S. currency, and I’m OK with that. … You have to decide what your priorities are.”

“It’s a completely new thing and you’re not sure what you’re getting into. And you prepare for it, but you know there’s some unknowns that’s going to pop up,” she said.

But the first day went well. Smith and her three school-aged children worked quietly in a classroom set up inside their home. Smith, with her years of classroom experience, welcomed the structure.

Until two years ago, Smith taught middle school math and science at North Hills Christian School, where her two oldest children attended elementary school. For the Smith family it was always “go, go go” between the morning routine and extracurriculars.

Home schooling has presented a wealth of options, Smith said. Extracurriculars like chorus or sports can happen at any time of day – they don’t have to be shoved into the evening along with homework. They can have individualized curriculums, and the family can garden, take a trip to the zoo or visit Discovery Place in Charlotte to supplement a lesson.

Smith said she was nervous when she started home schooling. She was so used to routine and structure, and wasn’t sure she’d be able to handle teaching kids of all different ages – two now 9-year-olds and one now 7-year-old – who each use a different curriculum.

“You’re a little nervous about what you’re getting into,” she said.

The Smith family still follows a schedule, but some things have surprised them. Now that they’re tying off their second year of home-school, Smith finds herself and her children gathered around the kitchen table, instead of sitting in the desks in the sun room.

“That means sometimes we’re reciting memory verses on the way to Harris Teeter,” she said.

Wooten and Smith both belong to a home-school co-op called Classical Conversations that focuses on a Christ-centered education, asking questions and memorization.

Smith said the group provides social interaction for her children and a support group for herself made up of a network of other moms. Smith’s father comes over once a week to teach Spanish, and Smith’s mother is teaching the children to crochet. While Smith said home schooling has drawn her family closer together, it doesn’t mean that it’s perfect.

Just like in a regular classroom, children can have bad days, or melt downs. But Smith has worked out a system. In the Smith house, students earn their weekly allowance through good behavior. If they misbehave, Smith calls her husband, who she said functions as the school’s “principal.” If bad behavior continues, he’ll come home from work and talk to the child. His support has helped her balance the roles of mom and teacher.

But sometimes, Smith said, all the “kiddos” need is a break. Being able to step away from a frustrating problem or subject is a unique freedom that she and her children have discovered.

“You walk away from that, you go do something different … and then you come back to it,” she said.

She’ll call another home-school mom and schedule a play date, or pack everyone in the car and go to the park for a few hours. For Smith and her family, the past two years have been about feeling out what’s right for them.

The Wooten family does things a little differently. Mary Beth does most of her learning independently, these days. Wooten goes over questions with her in the early afternoon or evening, but otherwise the teen is in charge of her own learning. Ten-year-old Noah is active, and works his lessons out in half an hour or hour-long chunks.

Next year, the Smiths will be switching to a different co-op that will provide more social interaction for their oldest daughter. It was her request, Smith said. And if any of her children want to pursue another curriculum, or another form of education, she and her husband will support them.

“There’s some people that homeschool and they feel that’s the only way for their kids … and you know, I completely respect that, but that’s not our outlook. For me and my husband, we take it one year at a time, we take it one kid at a time,” she said.

For Smith, home schooling is an opportunity to spend as much time with her children as she can, and to be their teacher is a privilege.

“To be able to have that influence in their life? To me that’s an honor,” she said.

After her children finish morning classes, they take a three-hour “quiet time,” that give’s Smith’s 2-year-old a chance to nap, the older children a chance to read and herself some time to unwind. Smith also takes Sunday and Thursday nights off; her husband takes the kids, and she goes out with friends, or takes some much-needed time to herself.

“In order for me to be the best teacher I can be, the best mom, the best wife, I’ve got to have time to myself … because otherwise I think it would be really easy to get burnt out,” she said.

Wooten doesn’t take nights off often – sometimes they’ll leave Mary Beth home with the younger children while she and her husband go out. But she said that sometimes, balancing the roles of mom and teacher is difficult — although not for the reasons people might expect.

But for Wooten, it is a calling.

“I feel like that’s what God wants of me, as a mom, is to be intentional with that time. You know, I’m not put here to live for myself,” she said.

Smith agrees that being a mom and a teacher is no walk in the park – but she thinks it’s worth it.

“Anything that’s worth doing can be challenging at times, but it’s worth it, it’s so worth it,” she said.