On hold: Why are some inmates in jail for years? 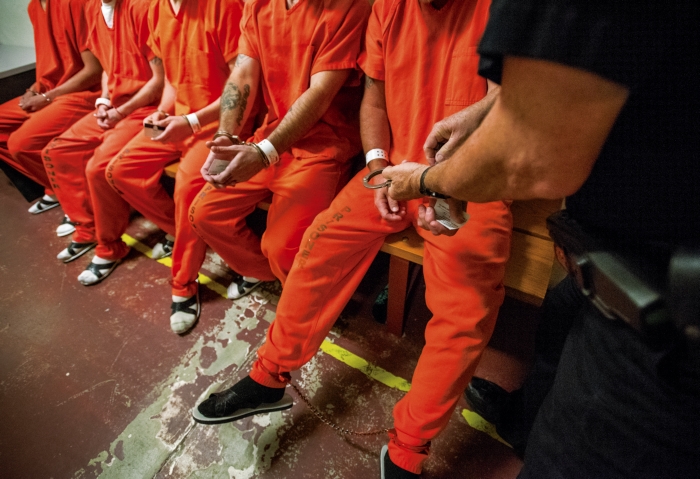 SALISBURY — Timani D’Ante Stark was one month shy of his 19th birthday when he was booked into the Rowan County Detention Center under a $1 million bond for a 2009 home invasion and shootout with a western Rowan homeowner and the homeowner’s son.

Stark, now 24, is one of more than 41 inmates who have been in the Rowan County Detention Center awaiting trial longer than a year. He was charged with attempted murder.

Stark has been in the jail five and a half years, which Sheriff Kevin Auten says is too long.

The Rowan County Sheriff’s Office has 41 inmates who have been in the jail more than 365 days, as of April 21, when the data was collected. Of those 41, Stark has been there the longest. Thirteen of the inmates are being held on attempted murder or murder-related offenses.

Auten receives an average daily population report that tells him how many inmates are housed in the detention center at 115 W. Liberty St. and the annex located at 400 Grace Church Road, off U.S. 29.
The main detention center is a 210-bed facility, and the annex provides an additional 160 beds.
Over the last 16 years, the number of inmates in the jail has fluctuated from the mid-100s to the high 300s.
In 2015, the average jail population was 313 inmates, up from 281 the year before —  some of the highest numbers in years.
The ‘Red Mile’
An estimated 10,000-plus inmates are moved to and from court a year, and at some point they all go through what is colloquially called the “red mile,” the  long, red-floored corridor leading to jail cells. Any person charged with an offense that requires jail time of any length arrives at the Rowan Detention Center one of two ways — straight from the outside or from a courtroom.

Also called a “turtle suit,” the collarless, sleeveless, green gown is too thick to fold into a noose.

Inmates are given an exam by the onsite nurse to determine if they have any health issues. Finally, they are taken to a jail pod, dormitory or special housing unit, particularly if they require some sort of medical care.
Length of stay
The Rowan District Attorney’s Office routinely identifies and reviews the status of the oldest pending cases, including cases where the defendants are in jail, said Rowan District Attorney Brandy Cook.
Oftentimes, delays in the disposition of criminal cases are not under the District Attorney Office’s control, she said.
Cook said some factors that can delay the disposition of a criminal case are:
Cook said Timani Starks, an inmate who has been in the jail nearly six years, is on his fourth attorney, appointed in March. His third attorney, Steve Gray, died in February.
“Each time the defendant has received a new attorney, the process has been delayed to allow the new attorney adequate time to prepare for trial,” Cook said.
She said there are more people in the jail who have been in custody for less than a year; a large percentage have been housed less than six months.
According to Cook’s data, as of April 26, more than 85 percent of the inmates in the jail have been there less than a year. More than 75 percent have been held less than six months.
She said only 5 percent have been awaiting trial a year and a half, and 5 percent of those inmates are charged with murder, rape/sex offenses, drug trafficking and/or other violent, high-level felonies.
Not all the inmates in the county jail are awaiting trials, she said — 10 percent are serving active sentences as a result of the Statewide Misdemeanant Confinement Program.
Across the state, inmates convicted of a misdemeanor crime, including driving while impaired, and those who are sentenced to no more than 90 days, serve that time in some county jails.
County jails like Rowan volunteer available space to house these state inmates. Rowan County has 30 inmates who are a part of the Misdemeanant Confinement Program.
Some of the inmates in the jail annex who used to be housed in Sampson County when Rowan didn’t have space have now returned, Cook said.
“Our office is tough on crime and, since we do not plea bargain away every case, some defendants have to wait longer for a jury trial,” Cook said.
Auten said Janet Ruffin, the pre-trial coordinator, helps reduce the number of inmates in the county jail by working with those eligible for special bond release, including inmates with special medical needs and those with a bond of $5,000 or less.
Cook added that an inmate could file motions through their attorneys that would also address bonds.
Repeat offenders also keep the jail population high.
Until a week ago, Joseph Patrick Lightsey had been in the county jail since Feb. 21, 2015, charged with a number of break-ins.
He was convicted in late April of being a habitual felon and is currently serving over five and a half years at Piedmont Correctional Institution. However, in 2011 Lightsey was charged with break-ins in February, March, June and July, and convicted months later.

“We have focused our limited resources on the prosecution of repeat offenders who are identified as habitual felons,” Cook said. “Our office has significantly increased the number of habitual felons prosecuted in Rowan County during my administration.”

She said a habitual felon typically receives a “lengthy prison sentence” and is “removed from our community and unable to commit new crimes.”