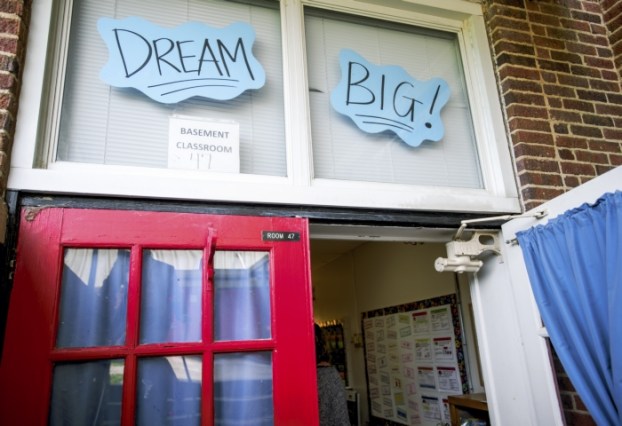 One of the basement classrooms at Faith Elementary School. Allison Lee Isley/Salisbury Post

C.J. Moody: You don’t need to be a follower of anyone on schools C.J. Moody is mayor of Faith

The Rowan-Salisbury Board of Education has been under fire for hiring firm OREd to do an analysis of school populations, capacity and where students live. OREd’s resulting proposal had the potential of closing six elementary schools to achieve 100 percent utilization.

I heard over and over that the school board wants to shut our schools down. This is a false statement.

Fact: The proposal to shut schools down was generated by OREd’s computer. Yes, there may have been talk (key word, “talk”) of eliminating schools to save money and put that money in the remaining schools that need repairs or updates. If I had to guess, I would say this has been a topic of conversation for 100 years or more.

Discussions about how we make a budget work when repairs, maintenance and upkeep are beyond what the budget allows are ageless. Two major times would be in 1921, when Salisbury City split off from Rowan County schools, and again in 1989 when they merged again into a county system. Meeting budgets has often been an issue for our school board.

The fire started with the school board meeting on April 7, and much has changed since then. Was it because the board members backed down from the outrage on social media and in the press, or did they see things in the proposal that didn’t make sense or wouldn’t work? I think both contribute to where we are now, but my personal opinion is the latter.

I was asked by several volunteers, teachers and PTA members of Faith Elementary School if I would attend a meeting at the school concerning the best way to approach the school board with questions and concerns of why “Scenario 1” had our school being shut down. This meeting resulted in their inability to address any of their concerns or in any way come up with an un-presumptuous way to address the school board.

As plans for a second meeting evolved and disheartening social media posts occurred, people began to realize their personal questions would still not be addressed. That is why the second meeting at Faith Elementary School was canceled, contrary to misinformation spread concerning the school board and Dr. Lynn Moody, superintendent. These leaders deserve an apology for that.

I have had the privilege of meeting with several Board of Education members and, believe it or not, they are as human as the rest of us. All members of the board with whom I met said they would be glad to meet with any group that had concerns and wanted facts. I was able to arrange a meeting between a dozen concerned parents/citizens and two of the board members. It turned out to be a great meeting and people that attended felt a lot better as they left.

The Board of Education is open to speak with anyone who has questions, concerns, ideas, etc. The men and women of our school board will listen to you. You don’t have to be a follower of anyone. I feel sure they will listen to any ideas that would benefit our school system.

You can voice your opinion to members of the board in the following ways:

1. Email. Their email addresses are posted right on the Board of Education website. I suggest email because you can edit what you want to say and you can make sure you have said everything you want.

2. Phone. It’s harder to get things across and remember all that was said with phone calls, but you may take that route. Phone numbers are right there with email addresses

Lastly, I have heard lots of people saying this a battle or a fight that we can only win by showing anger and rage. Why? Why battle and fight amongst ourselves? This may be a bad analogy, but I love every aspect of the game of baseball. I played a lot of baseball in the past. Several teams I was fortunate to play with won a lot of games. We didn’t win because we thought we were going into a battle or fight. We won because we were a team determined for greatness. The battle was within an individual player. For myself, I had to make sure I was better in the field than the same positioned player of the opposing team and that my bat was better than his, too! Each member of my team made sure of the same thing and we were able to win most of the challenges.

With “scenario 1” gone we will face more challenges as a County. We have to face these challenges as a team together. We can help each other, pick each other up on down days and compliment anyone on any given day. When we can do that as a team, Rowan County Schools and the education of our children will be unbeatable! We can even take our team to the “big dance” (as in Raleigh), show them how great our schools are and ask, “Why should Rowan County have to close schools when we are the best?”

I ask that you inquire about the facts for yourselves and don’t be misled. I think this board, along with others, knows that things need to change. That doesn’t mean overnight. So as our hometowns, our communities, and our county as a whole, it’s time to get in the game and find what’s best for the foundation of our children.

C. J. Moody is mayor of the town of Faith.

The Rowan-Salisbury Board of Education took a practical step last week in dismissing an unrealistic consolidation proposal. Closing six of... read more