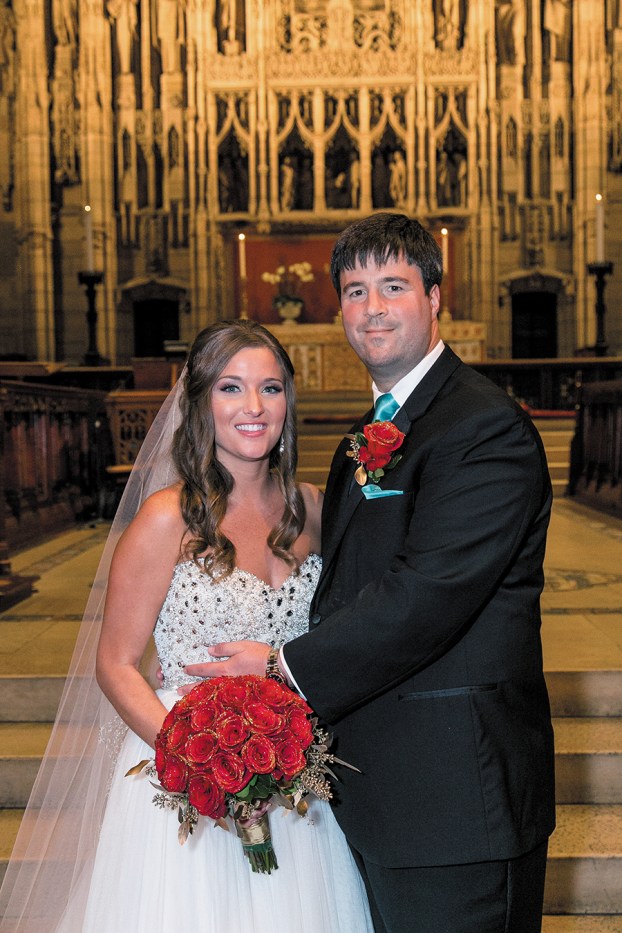 Miss Melanie Lynn Brown and Mr. Stephen Uriah Davis were united in marriage on Saturday, Nov. 7, 2015 at 4 p.m. at Saint Thomas Church Fifth Avenue, New York City. The ceremony was officiated by the Reverend Michael Spurlock with organist and director of music, Stephen Buzard playing the organ with accompaniment of strings and trumpet. Wedding guests were given a tour of New York City on Grayline Sightseeing buses while wedding photos were being taken and then transported to the Tiffany Room at The Hudson Theater where a trio band of 45 Riots provided music during cocktail hour. Dinner followed in the Hudson Theater with entertainment by the eleven piece band of 45 Riots.
On the eve of the wedding, the groom’s parents hosted a rehearsal dinner at the River Café in Brooklyn, N.Y., overlooking the East River with the New York skyline as the backdrop. Cocktails were served in the beautiful gardens. Brazilian pianist Dom Salvatore performed during both.
Early arrivals on Thursday were invited to Bravest, a restaurant and bar dedicated to the Firefighters of NYC. A post wedding brunch was hosted by the couple in honor of all who attended.
The bride is the daughter of Paula Brown of Hannibal, Mo. and Steve Brown of Sanibel Island, Fla. She is the granddaughter of Joanne and the late William Brown of Payson, Ill., as well as the late Norton and Mellie Stapleton of New Hartford, Mo.
The groom is the son of Mr. and Mrs. Steve (Julie)
Davis of Salisbury. He is the grandson of the late Gene and Louise Davis of Lexington and Lorraine Kluttz Lentz and the late James Uriah Lentz.
The bride was given in marriage by her brother,
Connor Brown. Bridesmaids included the maid of honor, Miss Annie Ainsley of Saint Louis, Mo., the matron of honor; Mrs. Mallory Brown Antle, identical twin sister of the bride, of Kansas City, Mo.; Miss Melody Davis, sister of the groom of Atlanta. Ga.; friends of the bride, Miss Victoria Davis,of Wildwood, N.J.; Mrs. Christy
Elfaham of Humble , Tex.; Miss Courtney Chambers, Tulsa, Okla.; Miss Taylor Perkins, Chicago, Ill.; Miss Lindsey Schindler, Hannibal, Mo.; Miss Lauren Spratt of Dallas, Tex.; and Mrs. Shana Fick, of Evansville, Ind.
Groomsmen included the best man, Mr. Steve Davis, father of the groom, of Salisbury;  Mr. Connor Brown, brother of the bride of Kirksville, Mo.; friends of the groom, Mr. Rocky Chan of Flushing, N.Y.; Mr. Ryan Corder of Charleston, S.C.; Dr. Justin de Boer of Norfolk, Va.; Mr. Ramy Elfaham of Humble, Tex.; Mr. Lee Trent of Charleston, S.C.; Mr. Nick Wills of Arlington, Va.; and Dr. William Wright of Charleston, S.C. Attendants were Dr. Daniel Cobb and Mrs. Claire Cobb of Charleston, S.C.
Cousins of the bride, sisters, Matilda, Lucille and Hattie Miller of Saint Louis, Mo. served as flower girls.
Beckham Antle, nephew of the bride, served as ring bearer.
The bride graduated Summa Cum Laude from the University of Missouri with a Bachelor of Science in
accountancy, a master of accountancy, and a minor in music. She has completed her CPA exam and is a senior associate at PricewaterhouseCoopers LLP.
The groom graduated from the College of Charleston in Charleston, S.C with a bachelor of science in accountancy as well as business and a minor in finance. He
received his master of accountancy and is employed by Etihad Airways of the United Arab Emirates as director of finance for the USA.
The newlyweds honeymooned in Bora Bora, and make their home in New York, New York.

Bobby and Jancy Ketchie of Gold Hill are pleased to announce the engagement of their daughter, Kadie JaNeda Ketchie to... read more