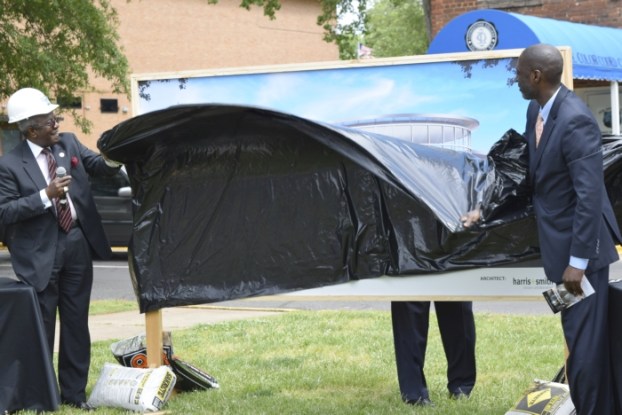 SALISBURY — The groundbreaking of Livingstone’s F. George Shipman science annex building Livingstone College has been ten years in the making. College President Dr. Jimmy R. Jenkins said that when he first toured the school’s facilities ten years ago, he realized the school would need a new science building if the school wanted to provide the best opportunities to its science majors.

Friday afternoon, that dream became a reality as Jenkins, college Board of Trustees members, faculty and community supporters gathered to celebrate as the college took a step towards the future.

Jenkins said he was “pleased to be at the helm at this juncture in the history of the college.”

Bishop George E. Battle, Jr., chairman of the college Board of Trustees and senior bishop in the African Methodist Episcopal Zion Church, said during his welcome remarks that the college has not had a facility of this type in 30 or 40 years.

“This is just the beginning of what we believe is a bright and prosperous future,” he said.

The annex, designed by Raynal Harris of Harris + Smith, an architectural firm based in Atlanta, Ga., will be approximately 16,000 square feet. It will include labs for biology and chemistry, research spaces and a planetarium, which Harris called an “immersion theater.”

The existing Duncan science building will receive a “facelift” with new classrooms, windows and roofing. The total project is budgeted at $6 million, Harris said.

“This is an exciting day for Livingstone, and I think for this community, this building represents a paradigm shift for our students to be able to take advantage of the STEM majors,” Jenkins said.

The annex is named in honor of Dr. F. George Shipman, sixth president of Livingstone, who served from 1969 to 1973.

By Rebecca Rider rebecca.rider@salisburypost.com SALISBURY — The Rowan-Salisbury Board of Education voted at a called meeting Thursday to dismiss a... read more