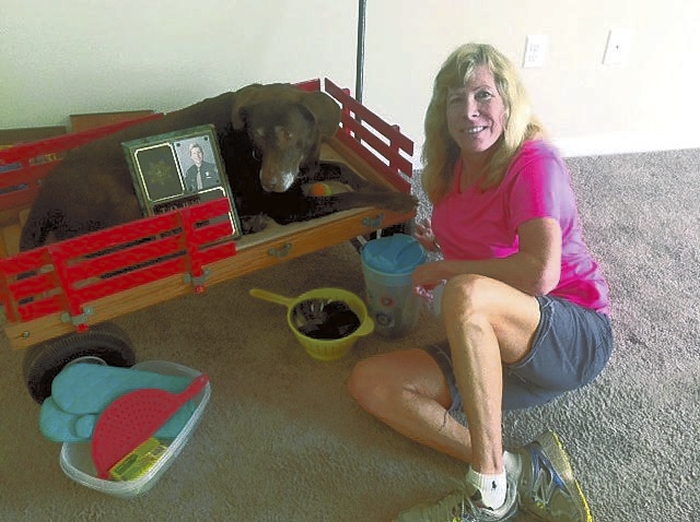 SALISBURY — Earlier this year, you never could have convinced Anna Jenkins that she and her service dog, Maggie, would be living in a one-bedroom apartment in Salisbury.

Jenkins and Maggie were homeless then and finding shelter where they could in Charlotte.

But several agencies, including Home Fires Burning, Family Endeavors, the Salvation Army and Rowan Helping Ministries, combined to find Jenkins a place to live. On April 29, the Army veteran and retired police officer moved into the 55-and-older community of  The Villas at Hope Crest on Lincolnton Road.

“I can’t explain how deeply gratified I am,” Jenkins, 55, said. “Never in all my prayers could I have expected this outcome.”

A newly formed Rowan Homeless Veterans Housing Task Force counts Jenkins as a success story on its way toward a goal of finding residences for 30 homeless veterans in 100 days.

“This is the first time we’ve lived by ourselves in five years,” Jenkins told the task force Wednesday. “I can’t thank you enough.”

The task force grew out of the First Annual N.C. Rapid Results Veterans Boot Camp in Raleigh. Ten folks from various agencies in Rowan County attended the intensive, two-day event in February aimed at creating awareness, cooperation and coordination among the organizations which provide support services and housing for homeless veterans.

The task force now meets about every two weeks to assess how it’s doing in identifying homeless veterans and finding housing for them.

Their tasks — more difficult than they might sound — are identifying homeless veterans, connecting them with the resources available and finding landlords who will provide housing for them.

Joy Warner, an outreach and intake specialist for Family Endeavors’ Supportive Services for Veterans Families, is part of an outreach committee of the task force. She takes to the streets regularly and looks for homeless veterans.

Reacting to one tip, Warner said she found no evidence in an area between Brenner Avenue and West Innes Street of tents, fires or footprints suggesting the presence of a homeless encampment.

Task force members also investigated reports of a veteran living in the storefronts along Main Street. They have checked on him several times, and he tells those inquiring about him he is not a veteran, nor does he want any help.

They will keep checking on him, Warner says.

Patricia A. Bryant, a housing specialist with Cardinal Innovations Healthcare, told fellow task force members Wednesday she was having problems finding landlords who have one-bedroom apartments, which most homeless veterans need.

And if local landlords have two-bedroom apartments available, the rent is usually higher than the $495-a-month Section 8 voucher available for homeless veterans. Bryant continues to pore over every rental resource, many of them online,  in trying to find leads to the housing needed.

And any landlords with housing available for veterans are being asked to contact the committee.

The HUD-VASH program combines the rental assistance vouchers for homeless veterans with case management and clinical services provided by the Department of Veterans Affairs.

More than 200 U.S. cities, including Salisbury, have made it a goal to end veteran homelessness, and historic levels of federal resources are being made available.

Nicole Dewitt, the task force chairman and director of outreach, policies and analytics for Community Link, said the group is trying to keep an updated registry of all the homeless veterans it identifies.

The homeless veterans are divided into three different lists — those in the community, those who already qualify for the HUD-VASH vouchers but are still waiting for available housing units and 12 VA contract beds which are at Rowan Helping Ministries.

Dewitt said the task force is inspired by placements stories such as the one of Jenkins and her service dog, Maggie.

A series of events starting with the 2007 death of her mother, whom she always took care of, plunged Jenkins into a spiral toward homelessness. It was hard to believe for a former military policewoman who forged a solid career in law enforcement after the Army.

She was the first officer with a canine in Petersburg, Va. She became a police department accreditation specialist through the University of Richmond, where she also earned a bachelor’s degree in English.

Her department accreditation duties took her across the country, including a stop in Las Vegas. Jenkins said she recognized how progressive the Las Vegas police force was and became an officer there, rising to the rank of sergeant.

“I didn’t want to leave, but my mom was dying,” Jenkins said. She moved back to the East Coast and became a contractor with U.S. Bomb Dogs in Washington, D.C., where she first hooked up with Maggie, a bomb dog for the Federal Reserve.

Jenkins and Maggie have been together since 2005. Maggie is identified now as Jenkins’ service dog for her post-traumatic stress disorder and depression.

Losing her mom and leaving what she felt was her true identity as a police officer in Las Vegas weighed heavily on Jenkins.

She ended up staying a while with a friend in Charlotte, where she spent most of her school years. But she faced some health issues. Twice in four months she broke her right femur, which was weakened by osteoporosis, and in January she suffered a small stroke.

Things took a positive turn for the duo in March. The Salvation Army in Charlotte arranged for Jenkins and Maggie to be transferred to Salisbury, where the chances were better for her to find help as a homeless veteran.

She and Maggie spent their nights at Rowan Helping Ministries for about four weeks. It wasn’t the best situation for Maggie, who still guarded Jenkins as though she were on duty.

“So we worked really hard to get her in housing as quickly as possible,” said Warner, who is serving as Jenkins’ case manager. Warner and Jenkins give Samone Cowan at Rowan Helping Ministries a lot of credit in helping the veteran.

At the shelter, Cowan partitioned Jenkins and Maggie off from the other population to help them get better rest at night.

“She was just tired,” Jenkins said of Maggie. “Over at the shelter, I was just working her to death.”

Jenkins, who is twice divorced and has no children, receives a small monthly pension from her years as a Las Vegas police officer. But she still has financial challenges ahead if she doesn’t find employment or some other resources.

Jenkins owns a 1999 Expedition, and her new apartment is convenient to grocery stores and the VA Medical Center. She plans on looking for secondhand furniture to furnish the new place, and she raves about the apartment’s big kitchen, appliances and overall decor.

Maggie already is a lot happier without all the distractions of the shelter.

“This humbled me, this experience,” Jenkins said. “I don’t know why they cared so much.”