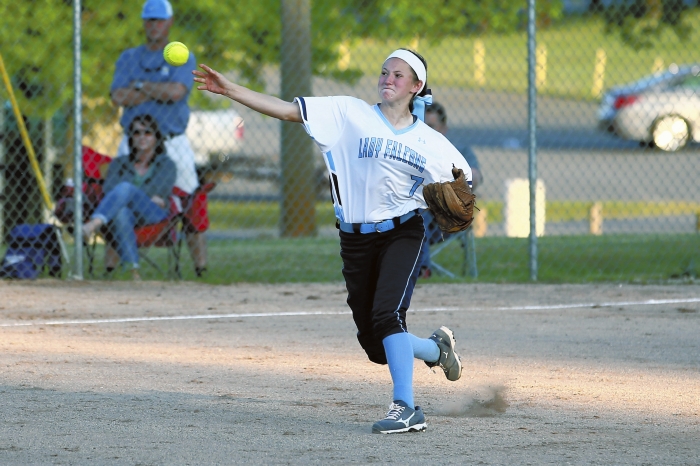 The Falcons (17-6) had beaten Cox Mill, 3-1 and 1-0, in the regular-season meetings, victories that were two of West’s finest of the season.
“Cox Mill is really good, and we’d gotten them twice,” West coach Jimmy Greene said. “We knew it was going to be tough to do it a third time, and our youth and inexperience bit us a little bit today.”
Third-seeded Cox Mill out-hit and out-fielded the Falcons in rainy, dreary conditions, and now the Chargers get to host No. 4 Central Cabarrus in tonight’s 6 p.m. championship game.
“Cox Mill deserved it,” Greene said. “They were the better team today.”
While regular-season champion Hickory Ridge will retain its No. 1 seed for the 3A state playoffs, Cox Mill and Central Cabarrus are now fighting for the No. 2 seed. West will drop to No. 3 below the tournament winner. The tournament loser still will make the state playoffs as a wild-card team, and the league’s fifth-place team, East Rowan, also figures to make the playoffs as a wild card.
“This loss hurts because it cost us not only hosting the tournament championship game — it cost us a seed,” Greene said. “It probably cost us a first-round home game in the playoffs.”
Cox Mill (16-6) got two runs immediately when Carly Kruse opened the game with a single and Paysia Reed belted a long, two-run homer to left.
West scored three runs in the bottom of the first without doing much with the bats. There were three walks, a hit batsman and several infield bouncers that had to be scored as fielder’s choices.
After that, the Falcons couldn’t do much of anything against Cox Mill’s crafty freshman pitcher Madison Michael. Her most effective pitch was a change-up. She got big outs with it.
“Cox Mill wanted us today and I think they wanted this one a little more than we did,” West senior Peyton Greene said. “We didn’t have enough good at-bats today. We had some bad at-bats, undisciplined at-bats.”
That scratch-and-claw bottom of the first gave the Falcons a narrow lead that Peyton Greene doggedly held for a long time. When she got the third out in the fifth on a grounder hit right back to the circle, she stranded Chargers at second and third.
But Greene couldn’t hold off Cox Mill in the sixth, and the Chargers pushed across three runs for a 5-3 lead. Bailey Johnston’s double (with two strikes) to right-center triggered the decisive rally. The Chargers got the tying run home on a right-side grounder on which the Falcons fired home late.
With the score tied 3-all, leadoff batter Kruse hammered a double down the third-base line to plate two runs.
“We’ve seen Peyton Greene pitch a lot,” said Kruse, a senior. “We know she likes to pitch us outside, but we made good adjustments to her today. I’d hit two straight balls hard that were outs, so I was getting a little frustrated. It was nice to hit that double in a good spot.”
Peyton Greene had struck out 10 Chargers in the last meeting, but they cut their strikeouts in half on Thursday.
Cox Mill tacked on an insurance run in the seventh, and the Falcons, silent since the first inning, needed three runs to tie. West put the tying runs on base with one out when Parker Greene walked, Peyton Greene singled and Mary Sobataka singled. But Michael was able to strike out Morgan Corriher and Timber Hedrick to end the game.
“Now we just have to make the best of things and play better in the playoffs,” Coach Greene said.
It was a satisfying win for Cox Mill coach Holly Harris.
The Chargers lost a senior – Sheyenne Marshall — who was killed in a summer boating accident, and senior center fielder Jamie Savarese is sidelined with a knee injury. So they’ve overcome a lot.
“Our theme has been playing for those girls that can’t,” Harris said. “The girls did a good job today of fighting back against a really good West Rowan team, and we finally beat them.”
Now Cox Mill has to try to beat Central Cabarrus for a third time to win the championship.
“That third time won’t be easy,” Harris said.