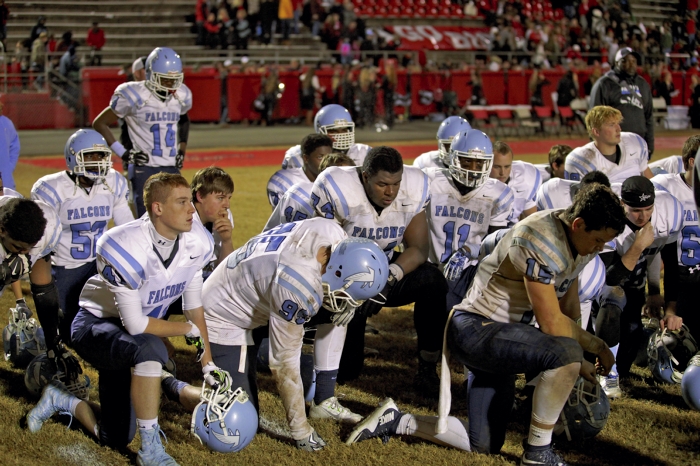 MOUNT ULLA — West Rowan senior Hezekiah Banks is a mountain of a young man at 6-foot-5, 335 pounds.
The offensive tackle also has run a 5.2 40-yard dash — serious motoring for a guy his size.
“Hez is a very athletic big guy,” West coach Joe Nixon said. “He was a big part of our offense, and he also was a great character guy.”
Banks, who signed last week with Winston-Salem State, spent some youthful years in New York, but his family relocated to Rowan County when he was still in elementary school.
Basically, Banks is an offensive lineman who has the mobility of a defensive lineman. He’s also blessed with extra-long arms. Those attributes explain why he was chosen to play for North Carolina in last December’s Shrine Bowl. Coaches had their pick of 10 offensive linemen from across the state. Banks is one of the guys they wanted.
“The Shrine Bowl was a good experience because there was a lot of talent there on both teams,” Banks said. “I blocked for a back (Freedom’s B.J. Emmons) who is going to Alabama. It was an intense game and we had a week of intense practices before the game.”
Banks showed versatility for the Falcons. He played right tackle as a junior and made all-county despite a toe injury. He played left tackle as a senior and repeated on the all-county team.
That Banks signed with Division II Winston-Salem State came as a bit of a surprise. Winston-Salem State has a stout program and was conference champ in the CIAA in 2015 as well as 2011 and 2012. Still, it’s not like the D-II schools usually get the 6-5, 335-pound Shrine Bowlers.
Banks didn’t fly under the radar of Division I schools. He’s hard to overlook, and they noticed him.
He actually was offered by Wake Forest when he was a sophomore, and he was eventually offered scholarships by East Carolina, Charlotte and North Carolina A&T.
But it took Banks a while to get everything squared away academically.
The other factor was that Winston-Salem State did a whale of a job recruiting him.
“They jumped in on him hard,” Nixon said.
After Banks didn’t put his signature on a national letter on signing day last November, Winston-Salem State came after the big guy with persistence. The Rams had a lot of selling points in their favor, including Winston-Salem being less than an hour from Salisbury.
“They started late, but from December on they were the school that showed the most interest in me,” Banks said. “They came to my house to see me. They even came to my job at McDonald’s to see me. They were the school that was constantly checking with me and wanting me to keep my grades up. It was like I meant more to Winston-Salem State than I did to anyone else.”
Now the Rams have Banks, and one of the positives about going to a D-II school is that he should have an opportunity to contribute early in his college career.
Exactly where the Rams are going to employ Banks remains to be seen.
He could stay at tackle, although a lot of people view him as a future guard.
Banks said Winston-Salem State has also mentioned a possible move to the defensive line. The Rams’ base defense is a 4-2-5 alignment, and Banks would be difficult to move as one of the two interior guys.
“I’ll be glad to try defense if that’s where they want me,” Banks said. “I’m just happy to be getting the chance to keep playing football at a good school.”
Banks plans to study engineering.