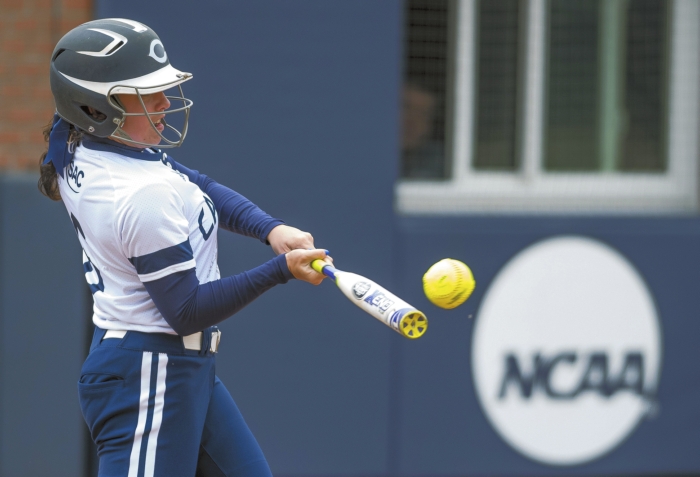 JON C. LAKEY / SALISBURY POST file photo ... Catawba’s Caroline Turner connects for a hit in an earlier game this season. Turner had two hits, including a triple, during the Indians’ 4-3 win over Georgia College at the NCAA II Southeast Regional on Thursday.

DAHLONEGA, Ga. — Morgan Brann’s sacrifice fly in the bottom of the seventh inning lifted Catawba to a 4-3 win over Georgia College in the opening game of the NCAA II Southeast Region 1 Softball Tournament on Thursday at Hill Stadium.

The fourth-seeded Indians, ranked 25th in NCAA II, improve to 39-14 and will await the winner of the night game between top-seeded North Georgia and Young Harris. Catawba will play today at noon.

The Bobcats fall to 39-14 and will face the loser of tonight’s game in an elimination game tomorrow at 2:30.

Catawba trailed, 2-0, after five innings, but rallied late. The Indians pushed across three runs in the sixth to go on top, 3-2, and after the Bobcats tied the contest in the seventh, Catawba won in walk-off fashion for the second straight game.

The Bobcats took the lead on a leadoff home run by Lacy Najafi in the second inning. Georgia College loaded the bases in the fifth and padded the lead when Abi LeRoy drew a walk to force home a run. Catawba would rally in the sixth as the first six batters reached on four hits and two walks.

Caroline Turner started the sixth with a single and base hits from Kristen Stinnard and Katherine Shumaker loaded the bases with no outs. Gina Gerone walked to force home a run and Brann’s single tied the game. Pinch-hitter Ashley Wagoner walked to put the Indians on top.

Brooke Taylor would enter the circle at that point for the Bobcats and got out of the inning without further damage. Georgia College started the seventh inning with hits by Caroline Snider and Danielle Bernstein. After a sacrifice, LeRoy tied the game with a grounder to short.

Catawba came right back in the bottom half of the inning. Turner walked and Stinnard beat out an infield single. Shumaker put down a sacrifice bunt and Gerone was walked intentionally. Brann was able to get enough on a 1-0 pitch to get it deep enough to right center into a steady breeze to get Turner home with the winning run.

Turner reached base all four times in the game with two hits and two walks. Stinnard collected three hits and Brann had two RBI.

Pitcher Carley Tysinger improved to 32-9 with the win. She allowed six hits and three runs with a pair of walks and eight strikeouts. She went over the 400-strikeout mark for the season — now with 406.

Taylor (7-2) took the loss as she gave up the run in the seventh. Carly Lewis, who entered the game in the third, had sat down seven straight Catawba batters before the sixth-inning outburst.

Catawba sqaundered some early chances as Turner led off with a triple in the bottom of the first, but was erased at the plate trying to score on a bunt by Stinnard.

Lynnsey Taylor doubled with one out in the third, but couldn’t hold third on a slide attempting a triple. The Indians put two on with two outs later in the inning when Lewis came in.