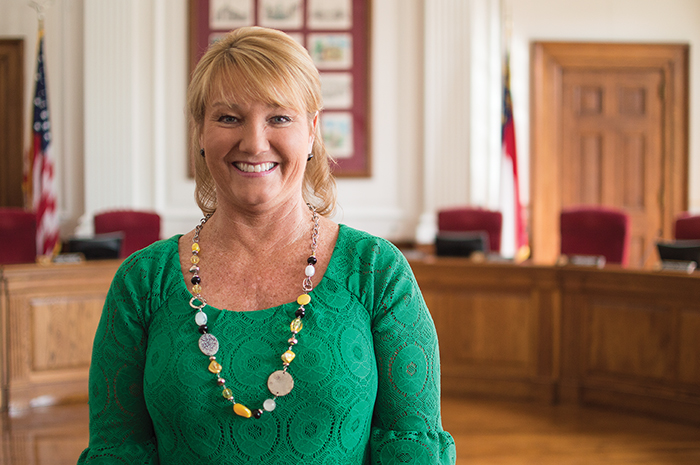 Josh Bergeron / Salisbury Post - Rowan County Clerk and Assistant to the County Manager Carolyn Barger recently received her Master County Clerk certification. She is one of seven clerks in North Carolina who has earned the honor.

SALISBURY — There’s not many clerks quite like Carolyn Barger.

“I was sweating bullets when it was time to file my application for the certification,” she said.

Recipients of the Master County Clerk designation was announced earlier in 2016, and Rowan County commissioners formally recognized Barger’s achievement during their meeting this week. During Monday’s meeting, commissioners spoke about her role in keeping county government running smoothly.

When commissioners presented Barger with a certificate, Chairman Greg Edds said: “We wanted to present this to her and to tell her that we really know who runs the county around here, and we appreciate what she does for us. … It has been documented. We have one of the best (clerks) in the state, and we would argue the best in North Carolina.”

Barger said serving the public is her favorite part of being a clerk.

“One of the best things about being a clerk is being able to make a difference, not only to the people you’re appointed by, but to the people that they serve,” she said.

Being able to make a difference, however, requires ample amounts of patience.

“When somebody walks in the door and they’re angry, sometimes they walk out smiling because I’ve been able to help,” she said. “I’m the first person that they see. A lot of times if they come in, they’re upset, demanding to see a county commissioner and willing to share with me what their problem is, a lot of times, I can fix it.”

Her time in local government also includes working as a part-time clerk for the town of Cleveland. Previously, she also worked for the Salisbury Machinery Co. as a secretary and bookkeeper.

From 2013 to 2014, she was president of the North Carolina Association of County Clerks.