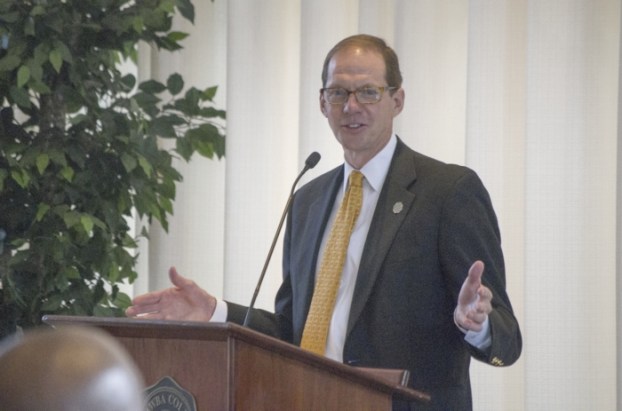 SALISBURY – Catawba alumnus and trustee Gregory M. Alcorn of Salisbury was honored by his alma mater on May 1 as the 2016 recipient of the college’s Adrian L. Shuford, Jr. Award for distinguished service.

Alcorn was presented the award by college President Brien Lewis, during a special 1851 Society celebration for the institution’s major donors in Peeler Crystal Lounge of the Robertson College-Community Center.

Lewis called Alcorn “a highly successful businessman and entrepreneur” whose “decisions and interactions are driven by his faith and an abiding love for his God, his family and his community.” He said Alcorn is “an agent of change” who “willingly steps forward to accept new challenges.”

Named in honor of the late Adrian L. Shuford, Jr. of Conover, a businessman and a long-serving member of the college board of trustees, the award is presented annually to individuals whose actions and generosity to both the college and their communities emulate those of  Shuford. Originally named the President’s Award for Distinguished Service, and first presented in 1983, the award was renamed to honor Shuford in 1984 for his service and generosity to Catawba.

Alcorn, who has lived in Salisbury since he was 8 years old and grew up on the Catawba College campus, graduated from Salisbury High School and then Catawba before earning his MBA from UNC-Charlotte. Today, he is the CEO of Global Contact Services. The company, which Alcorn began in 2001, has served retail, insurance, financial and government clients for over 15 years. It provides clients with outsourced staffing and management for customer interactions.

Alcorn was tapped to serve on the Catawba College board of trustees in 1999 and has served on a variety of its committees, including finance, enrollment, governance, and audit. He has also served on Catawba’s Chiefs Club board, its Green Revolving Fund committee, and a presidential search committee. Catawba honored him with its Distinguished Alumnus Award in 2010 and the Church-College Award in 2015.

He serves on a variety of boards, including the United Church Homes and Services, the North Carolina State Board of Education, Families First, the First UCC Foundation, Waterworks Visual Arts Center and The Appleseed Project. He is active with The First Tee of Salisbury, Boy Scouts and his church, First United Church of Christ in Salisbury. He is a member of the World Presidents’ Organization.

Married to wife Missie for 25 years, the two are parents of children Clark and Eleanor, both students at UNC-Chapel Hill.