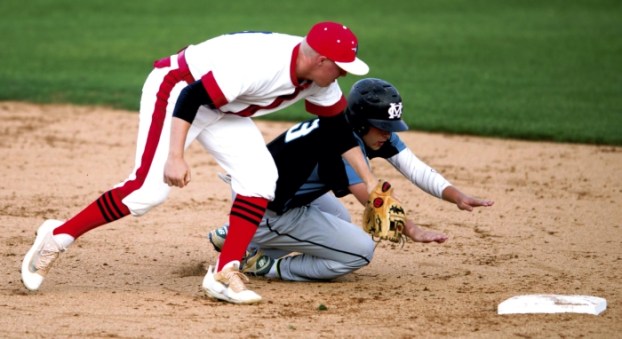 GRANITE QUARRY — Cox Mill pushed across an unearned run in the top of the seventh inning Wednesday night to stun host East Rowan, 3-2, and claim an unexpected opening round win the in South Piedmont Conference Tournament.

In a game that took three days to complete due to rain on Monday and Tuesday, the seventh-seeded Chargers (13-11) managed just four singles in the game but took full advantage of five hit batters, four walks and a couple of East errors to find a way to win at Staton Field.

“I told the guys after the regular season that once the post-season begins we are always a different team and it is always a new season,” said Chargers coach Brandon Taylor. “Our players showed up tonight and beat a really good East Rowan team.”

Cox Mill broke a 2-2 tie in the top of the seventh when sophomore Justin Fox reached on an error as East shortstop Ike Freeman could not find the handle on a tough bouncer up the middle. Mustang hurler Hayden Setzer struck out the next two batters but Fox moved to third on a pair of wild pitches. East ace John Owen came on to try and slam the door but his 1-1 pitch was in the dirt and allowed Fox to race home for the 3-2 lead.

Cox Mill senior right-hander Cody Smith secured the victory in the bottom of the seventh with a trio of strikeouts against the middle of the East batting order, leaving the tying run on second base.

“All I needed to do was throw strikes and trust the guys behind me to make the plays,” said Smith (5-2), who noted he relied 75 per cent of the time on his hard slider. “If they hit it, they hit it — as long as it they didn’t hit it too far. “

East Rowan (17-8) came into the SPC tournament as the second seed and had twice skunked the Chargers, 10-0, in the regular season. But they never got untracked in any phase of their game in the opening round.

“We played a horrible game,” Mustangs coach Brian Hightower said afterwards. “We made defensive mistakes, we made base-running mistakes and we didn’t swing at our pitches. You do everything wrong and that is why you go home in the first round of a tournament.”

East had taken a 1-0 lead in the game on Tuesday night on three singles and a sac fly by Owen but stranded two runners in a sign of things to come. The heavy rains and lightning came in the bottom of the second to halt the game. When play resumed Wednesday night, the Chargers tied the score, 1-1,  off starter Colby Myrick on a walk, hit batter and a hot shot single to second by lefty Justin Sponseller.

Sponseller came through again in the top of the fifth with a two-out RBI-single after another walk and hit batter, to give Cox Mill a 2-1 lead. The Mustangs responded in the bottom of the fifth to tie it at 2-2, but wasted a chance to take control of the game with some base-running issues. Wise was hit by a pitch then Freeman singled to center. Jackson Justus followed with a double down the left field line that scored Wise easily. But Freeman rounded third, slipped trying to get back to the bag and was tagged out.

Chandler Blackwelder singled to put two runners on but Owen grounded to third and Justus was nailed at the plate. East left two runners on in the inning, stranding 10 total for the game.

Cox Mill now advances to play at Carson tonight in a semi-final contest while East Rowan will have to regroup and get ready for the state 3A playoffs, which open next Wednesday.

“We have got to understand that we are not at a championship maturity level yet,” Hightower said of his team. “We have to learn to play every pitch of every inning.”