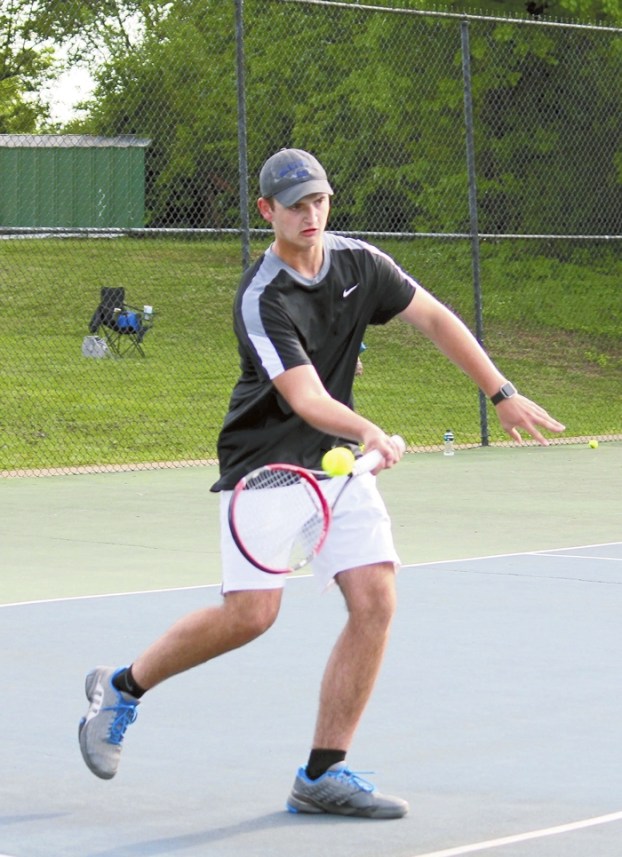 submitted photo/file ... No. 2 singles player Hunter Carlton came back from a 5-1 deficit in his first set on Wednesday, but won 7-5, 6-2, in the 2A state dual team playoffs. Salisbury defeated Surry Central, 5-1.

SALISBURY — Salisbury’s No. 2 singles player Hunter Carlton shoveled a hole in his first set, but he climbed back from a 1-5 deficit and helped the Hornets advance in the first round of the 2A dual team state playoffs.
Carlton won, 7-5, 6-2, on Wednesday afternoon at the Salisbury courts, and the Hornets topped Surry Central, 5-1.
“There’s more pressure in the playoffs when you’re a senior because you never know when it’s going to be your last match,” Carlton said. “I missed a whole lot of easy shots early. I was trying to make things happen too fast.”
Salisbury coach Milton Griffith agreed that there were some nervous moments, but he liked the way Carlton (15-1) rallied.
“I talked to Hunter twice,” Griffith said. “I just wanted to get him to calm down a little bit. He was making a lot of minor mistakes and kind of beating himself. But once he got settled into the match, he didn’t look back.”
Carlton, a Mars Hill signee, was the singles runner-up in last week’s Central Carolina Conference Tournament.
“I got it rolling,” Carlton said. “In the second set, my shots kept falling.”
Salisbury’s No. 1 player, Spencer Storey, who is headed to the University of Florida to study engineering, had an easier time. Storey won, 6-0, 6-2.
“I was playing a guy I really didn’t know so I couldn’t underestimate him or overestimate him,” Storey said. “I just played my game. That was good enough today.”
At No. 3 singles, David Derrick had been an automatic win all season for the Hornets. He prevailed, 6-0, 6-4.
“Everything was clicking for me early, but then I tensed up a little bit,” said Derrick, who will continue his education at UNC Wilmington. “I got it back and started putting shots on the green instead of the red. When you do that, good things usually happen.”
Storey and Derrick form Salisbury’s No. 1 doubles team and the duo won the CCC tournament last week, but no doubles were required on Wednesday.
That was because Salisbury also got a win at No. 4 from Matt Sukkasem, the fourth senior in the Hornets’ lineup and another one at No. 6 from freshman William McGee, who stayed unbeaten in singles.
Salisbury lost at No. 5 where freshman Roarke Burton fell to Brandon Norman. It was the first singles loss for Burton.
“Our top four players are seniors, but those two freshmen (Burton and McGee) give us some light at the end of the tunnel,” Griffith said. “And we’ve got another strong player in sophomore Adam Drye.
Drye teams with Burton at No. 3 doubles for the Hornets. They qualified for the regional.
It was a successful and quick day for the Hornets. They won their 16th straight match to stay unbeaten, while Surry Central, the runner-up to West Stokes in the Western Piedmont Conference, fell to 9-5.
“There were some competitive matches,” Griffith said. “We’ve played well all year, but we needed a good match like this. We don’t get a lot of competition until we get into the state playoffs.”
Salisbury will face a major challenge in next week’s second-round match against Brevard. The Hornets will host it, but perennial power Brevard (13-1) eliminated the Hornets last season and has finished second in the state behind Carrboro the last two years.
•••
The 2A Midwest Individual Regional will be held this weekend at Salisbury High, City Park and Catawba. The doubles tandems of Storey-Derrick and Burton-Drye will be in action, with Carlton and Sukkasem competing in singles. Action begins at 2 p.m. on Friday.