Rain causes kerosene to spill into creek at Hurley Park 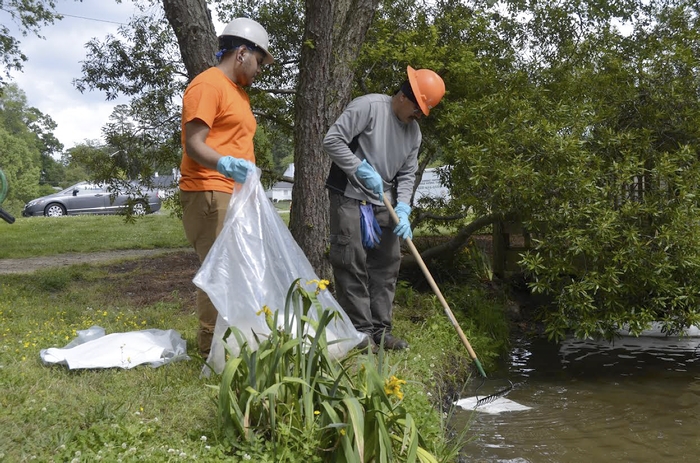 Jose Villegas, an employee of Contaminant Control Inc. — Environmental, uses a rake to push around an absorbent pad to catch kerosene that leaked into a creek at Hurley Park as Kevin Catalan-Perez, holding the bag, looks on. Heavy rains got into an underground kerosene tank and pushed the fuel out, which spilled into the creek. Shavonne Walker/Salisbury Post

The rain filled up in an underground kerosene tank located behind a home in the 800 block of North Craige Street. The rain essentially pushed the fuel out and into the creek, said Fire Chief Bob Parnell.

The Salisbury Fire Department responded to the home around 6:30 a.m. after receiving a complaint of an odor of fuel. Fire crews used absorbent pads and absorbent booms to try to contain the spill.

Parnell said an estimated 50 gallons spilled into the creek and onto the nearby golf course. He said the house is up for sale and not believed to be occupied. He did speak with the homeowner.

The N.C. Department of Environment and Natural Resources was contacted about the spill.

The fuel is not flammable and is not dangerous, Parnell said.

A hazmat clean up company, Contaminant Control Inc. — Environmental, which has an office in Salisbury, began the process around 8 a.m. The clean-up process was expected to continue at the park into the early evening and a crew will likely return Wednesday.

Jose Villegas and Kevin Catalan-Perez used a rake to push the absorbent pads around the water and collected the soiled pads. The men made their way around the lake placing the pads into the water and lifting them once the fuel had soaked them.