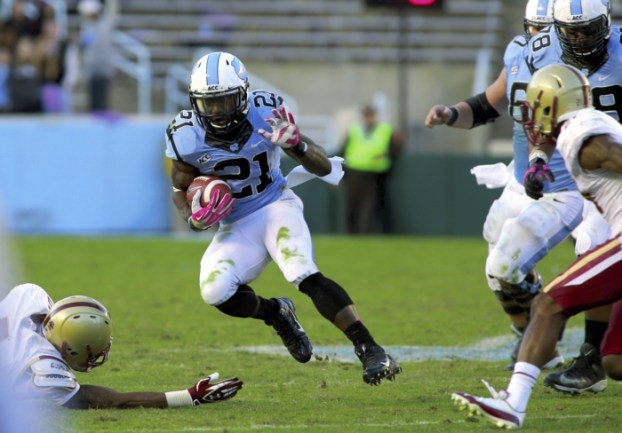 SALISBURY — Speed kills and speed also unlocks doors that appeared to be closed.
Salisbury High graduate Romar Morris can travel 40 yards in 4.3 seconds, a rare ability that sets him apart from most humans. That’s why Morris signed with the New York Jets after the NFL draft concluded on Saturday.
Eight NFL teams contacted Morris before, during or after the draft.
“The Chicago Bears, Denver Broncos and Jets stood out as having the most interest,” Morris said. “I had a strong feeling and a very good feeling that I’d sign with the Jets. Their running back coach (Anthony Lynn) talked to me before the draft and he called me again during the draft.”
Morris, 5-foot-8, 188 pounds, didn’t get many touches at North Carolina as a senior, a season that was, by far, the least productive of his four years in Chapel Hill, but he never lost faith in his legs and his gift.
Morris spent 10 weeks training in Dallas, Texas, with Michael Johnson, the sprinter who won four Olympic gold medals and eight world championships. That’s how a fast young man got even faster.
“When you’ve got someone like Michael Johnson working with you every day and critiquing your running style, it has to be a big advantage,” Morris said. “He knows everything there is to know about sprinting.”
That extra training prepared Morris for his impressive Pro Day on March 22. The 30 NFL scouts that assembled in Chapel Hill hadn’t come to see Morris, but they couldn’t help but notice the blazing 4.35 time that he ran and some noticed how he smoothly caught passes thrown by UNC QB Marquise Williams.
That put Morris back on the radar for teams that had written him off or had forgotten him. He was ranked as one of the nation’s top 30 prep backs when he finished his high school career.
“A lot of people started liking me a lot more on Pro Day,” Morris said with a laugh. “There were some people that didn’t know I had that kind of speed. That day opened some eyes.”
Morris was a phenomenal athlete as a Salisbury Hornet, putting up a career that didn’t get as much attention as it deserved because K.P. Parks was running wild at West Rowan and Shaun Warren was doing amazing things at Carson in the same era.
Morris rushed for 3,348 yards on balanced teams that also featured QB John Knox. He had 883 yards in receptions and scored 58 TDs in a three-year varsity career. Morris was the MVP when Salisbury beat Elizabeth City Northeastern in the 2010 2AA state championship game, and he was the NCHSAA’s Male Athlete of the Year for the 2010-11 school year.
“He was the kind of player you dream about coaching and the kind of kid you dream about coaching,” said Joe Pinyan, who was Morris’ football coach at Salisbury.
Morris’ high school track career (indoors and outdoors) topped his football career.
He was MVP of the 2A State Championships twice and led Salisbury to two team state championships. He won five individual state championships — taking the 100 and 200 outdoors two times each and the 55-meter dash indoors.
In basketball, Morris wasn’t a scorer (388 career points), but he played an important defensive role on four strong teams that won 85 games and went 12-0 in Sam Moir Christmas Classics.
After a redshirt season in 2011, Morris’ career at UNC got off to a fine start in 2012. As a freshman he had 386 rushing yards and 204 receiving yards and he was often electrifying on kickoff returns.
As UNC kept bringing in prize running back recruits, Morris’ sophomore and junior stats dropped a bit from his freshman year. As a senior, he almost vanished. He got only 10 carries and made nine receptions.
He finished his college career with 1,024 rushing yards and scored 14 TDs (12 rushing, two receiving) for the Tar Heels.
“When he did play as a senior it was in passing situations, and he showed he could catch the ball and he showed he could block,” Pinyan said. “He’s improved at both those things. Those weren’t his strong suits in high school. We just needed him to run the ball because he could score from anywhere on the field.”
Morris kept his head up during that tough senior season. The team was winning. That helped.
“I enjoyed my career at UNC,” Morris said. “I got a chance to be versatile and I showed I could perform on special teams.”
Morris didn’t watch the draft unfold on television, so it wasn’t like he was sitting around waiting to hear his name called. He knew it wouldn’t be.
“I was playing video games, and I didn’t watch,” Morris said. “But I had faith that I’d get a chance.”
Now he’s getting that chance.
The Jets appear to be in good shape at running back, with an experienced crew led by Matt Forte. But if Morris is going to make it in with the Jets, it’s probably not going to be as a running back. It’s going to be as a slot receiver or as a return man — or both.
His special speed gives him a chance.
“When you’re an undrafted free agent, it’s touch-and-go,” Pinyan said. “But you know Romar will give it his best effort. And his best effort is going to be better than most — and faster than most.”
Morris will leave for the Jets rookie minicamp on Thursday.