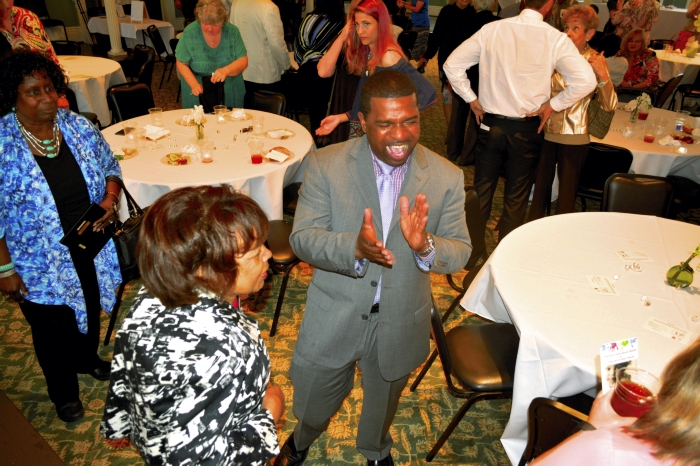 By Susan Shinn
For the Salisbury Post
The story seemed too real. The details were too accurate. The darkness of the tight space under the bleachers. The smell of a match being lit. The light of the match the only punctuation in the night.
A boy was savagely beaten and sexually assaulted and nearly choked to death under those bleachers. But he escaped, and he ran. When asked by his mother what happened to him, the boy said, “I was robbed.” The boy wasn’t too far off the mark, said Kevin McNeil, a special victims detective with the DeKalb County Police Department in Atlanta.McNeil, a motivational speaker, carries that boy with him — because he was that boy.

He’s worked to overcome the horrific abuse he suffered, and now asks the question of law enforcement officers and all who work with abused children, “Why do you do what you do?”

He said it’s often easy to answer “what” and “how,” but the “why” of someone’s job tends to dig deeper.

It was also a time to honor those supporters. Cheerwine and Mambo Grill received the business organization award and the community organization award, respectively. Additionally, Chi Chi Ray-Leazer and the Rowan County Sheriffs Office were named volunteers of the year, and Brian Stallings, Salisbury’s interim police chief, and Mark Wilhelm, a former police chief, were named winners of the Kathleen Russo Friend of the Child Award.

Matt Marsh has been on the board of Prevent Child Abuse Rowan for the past nine years. Dr. Kathleen Russo, the agency’s former medical director, had trained with him at the Forum, he said.

“She came up with the idea of a 5K for a fundraiser, and that’s how the Butterball 5K got started,” he said. “It got me involved. I’ve seen the agency grow and I’ve seen the end results of children who have gone through the Child Advocacy Center.”

It was years later that McNeil finally got help.

“It took a lot of work for me to be in front of you today,” he said. “I’m one of the lucky ones. Abuse is one of the most destructive forces in this world. Abuse turned inward is self-abuse or addiction. Abuse turned outward is violence. Abuse destroys your ability to have relationships and lose connections. It separates you from yourself and separates you from possibilities.”

“I was robbed of all that,” he said, “and it took me 30-odd years to find myself again. We cannot be silent on this issue. I don’t just have a message, I have a mission.”

“That’s because of awareness and because of teaching in our schools,” McKeithan said.

The agency is in its second year of its prevention and education program, led by Melissa Shue, McKeithan said. “We teach body safety and overall safety to first and fifth-graders. We’ve had numerous disclosures from children who have said, ‘I didn’t know I was supposed to tell anybody.’ This program has been immensely successful.”

A new program is the Nurturing Parenting Program, in which Prevent Child Abuse Rowan is partnering with Smart Start Rowan.

“We are great at putting out fires once abuse happens, but what are we doing to get ahead of the game?” McKeithan asked, citing the reason for the new program.

McKeithan also noted that the Terrie Hess House would soon be undergoing an expansion.

“We are bursting at the seams with our space,” she said. “We’re looking at a possible expansion, and looking at plans and logistics. We are just super grateful to Novant.”

Novant rents the space for the Terrie Hess House to the agency for $1 a year.

McKeithan reminded the crowd about two upcoming events: Spin to End on May 7 at The Forum, and the second-annual Toss for Tots cornhole tournament Sept. 17 at the Trolley Barn.