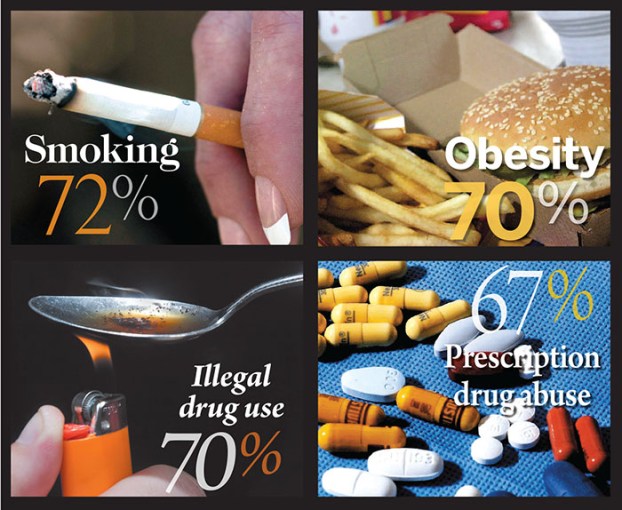 The top health problems expressed by people participating in the public survey. The percentage is the number of people that said this is a major problem or somewhat a problem. The list of the top 10 problems from the survey is on 4A. Salisbury Post file photos Click on the above picture to read the fullCommunity Health Assessment

SALISBURY — Do Rowan County residents care about local health problems? A recently released report suggests the answer is no.

Conducted by the Rowan County Health Department and Novant Health Rowan Medical Center, the report ranks obesity, tobacco use and mental health as the most significant health issues in Rowan County. However, there’s another notable finding in the report — a “lack of interest in and ownership of health.” For example, 43.5 percent of survey-takers responded “don’t know” or didn’t answer questions in the community issues section.

“Rowan County ranks, now and historically, in the middle or is not in a danger area in many of the health indicators,” the report states. “The lack of danger can cause a community to become complacent, accepting or both. Participation in the public survey also provided validation that people are not as interested in their individual health or the overall health of the county.”

“They shake their heads and thats the end of it,” Joslin said. “We are talking the talk, but not walking the walk.”

What are our health problems?

The recently released report — called the 2015 Community Health Assessment — is required every three years. Priority areas for the latest report are similar to results from one conducted in 2012. The previous report determined the most significant health priorities to be: dental care, medical care, chronic disease, teen pregnancy, physical fitness and drug abuse.

Instead of determining individual health problems — teen pregnancy for example — the most recent report places a priority on umbrella topics and associated diseases. Joslin said it’s important to note the 2015 report is the first time mental health has ranked high enough to be declared a priority. The mental health priority includes items such as prescription drug abuse and illegal drug use.

“It’s something we really need to address, especially when it gets into illegal drug use,” he said. “People are dying from that and prescription drug abuse.”

In a public survey conducted for the report, respondents rated illegal drug use as tied for third among all health problems. Abuse of prescription drugs was fourth in the public survey.

Rowan County’s death rate from drug poisoning is 75 percent higher than the state average and higher than most peer counties.

Other priority areas in the report are obesity — including diabetes, kidney disease, high blood pressure, high cholesterol, heart disease and stroke — and tobacco — including respiratory illness and various forms of cancer.

The report found a large majority of Rowan County residents — 83 percent — have adequate access to exercise opportunities, but most aren’t getting enough physical activity. The percentage of adults getting adequate activity is 39.4 percent, according to the report. That’s 7 percent lower than the state average.

“These factors clearly show that there are sufficient opportunities to exercise, but Rowan citizens are not utilizing them,” the report states.

“It takes an entire county to solve these problems,” he said.

In a statement provided to the Salisbury Post, Novant Health Rowan Medical Center President Dari Caldwell said the hospital intentionally forms “strategic collaborations with local groups such as the YMCA, local churches, and other community groups to help address specific social problems while also providing an intervention for the identified health need.”

Caldwell noted that the hospital provides free education on topics that include diabetes, high blood pressure and obesity. The hospital will also provide courses that help people quit smoking, according to the statement.

Education is a solution, but it only works if people care, according to the report.

“Most of the problems the county is experiencing, such as obesity, are long term problems,” the report states. “These situations can cause a community to become complacent, accepting or both. When complacency and acceptance set in, it is difficult to cause change or create momentum toward change. This presents a huge challenge to those who are trying to improve the health and wellness of the county residents.”

An example of positive change?

When asked about the report, County Commissioner Judy Klusman, said “leading by example” is one way county government officials could help improve the health of local residents. She also emphasized a familiar point — efforts to improve health only work if people care.

“It’s not like we can force anybody to be healthy,” she said.

For a full copy of Rowan County’s 2015 Community Health Assessment, visit the Heath Department’s website at www.rowancountync.gov/GOVERNMENT/Departments/HealthDepartment, click on the Healthy Rowan link on the left side of the page and scroll down the page to the Health Department’s logo. A link to the report is immediately below the logo.

By Amanda Raymond amanda.raymond@salisburypost.com SALISBURY — The Salisbury area may soon be seeing more monarch butterflies, thanks to a Rowan... read more