Panthers use 3 of 5 draft picks to address cornerback needs 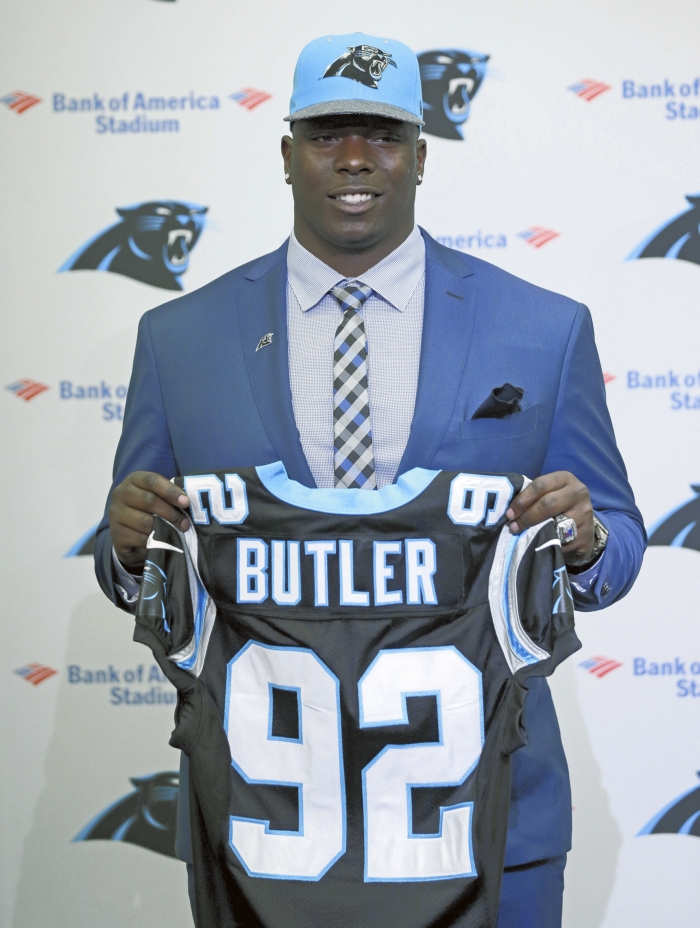 AP Photo/Chuck Burton ... Carolina Panthers’ Vernon Butler, a defensive lineman from Louisiana Tech, poses for a photo with a jersey during a news conference in Charlotte on Friday. He was chosen by Carolina during the NFL draft first round on Thursday.

The NFC champions used three of their five draft picks on cornerbacks after Norman signed a free agent contract with the Washington Redskins last week.

Carolina selected Louisiana Tech defensive tackle Vernon Butler with its first-round pick, then used its next three picks on cornerbacks — James Bradberry from Samford in the second round, Daryl Worley from West Virginia in the third round, and Zack Sanchez from Oklahoma in the fifth round on Saturday.

The team closed out the draft by taking tight end Beau Sandland from Montana State in the seventh round with the second-to-last pick overall in the draft.

Bene Benwikere, last year’s nickel back, is penciled in to start at one starting cornerback spot but the other is open for competition. Robert McClain, a late-season addition who wound up starting in the Super Bowl, Teddy Williams, Lou Young and free agent pickup Brandon Boykin are the other cornerbacks on the roster competing for playing time.

“We have been rotating players through there (at cornerback) since I got here (in 2013) and you don’t want to do that,” Panthers general manager Dave Gettleman said. “You want to have a core. You want to have stability like we have built with the offensive line and the linebackers. All three of these kids are talented enough to play in the league.”

The 5-foot-11, 179-pound Sanchez had 13 interceptions and 88 tackles in his final two seasons with the Sooners and was a semifinalist for the Thorpe Award last season.

Sanchez said he was “born with the ability to make plays.”

And he doesn’t mind the Panthers are bringing in a lot of competition at his position.

“I am just ready to work my tail off and get on the field regardless of where I was drafted,” Sanchez said. “If I was the first or the last corner taken, you know I just want to get into camp and work hard and prove myself to show the coaches that you know I belong on the field.”

Gettleman called Sanchez a “gambler” in the secondary.

“He’s like a basketball player who scores 25 (points) and gives up 18 — and I will take it,” Gettleman said.

The 6-5, 253-pound Sandland transferred from Miami and caught 37 passes for 632 yards and nine touchdowns last season for Montana State. The Panthers said he’s not only a solid receiver, but a quality blocker in the same mold as current Pro Bowl tight end Greg Olsen.

While it was expected the Panthers would address the cornerback position in the draft, it seemed unlikely they would draft three of them.

Carolina initially put the franchise tag on Norman after he had four interceptions, including two touchdown returns, in the first four games of the 2015 season and developed into one of the top players in the league at his position. But Norman didn’t immediately sign the franchise tag offer, and the team later rescinded it with Gettleman saying the team wanted players who are “all in.” Two days later, Norman signed a $75 million free agent contract with the Redskins.

Sanchez is hoping he can fill the void created by Norman.

Gettleman traded the team’s fourth round pick Friday night as part of a deal to move up to get Worley in the third round, leaving the Panthers will only two picks on the final day of the draft.