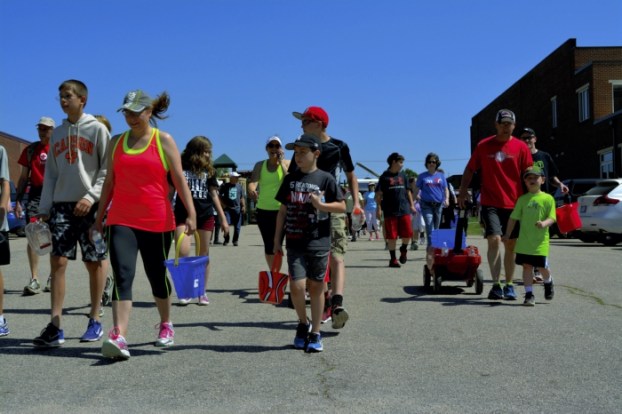 About 100 people participated in a water walk on Sunday sponsored by Trinity Lutheran Church. Here, the group leaves from the church to walk to draw water at Lake Corriher. People who do not have access to clean water must walk an average of 3 1/2 miles a day to find it.

The group set off to draw water — about a mile and a half from the church. Joe Wright, Jerry Shapley and Bob Davis draw water from the creek across from the South Rowan Y.

LANDIS — When you brush your teeth in the morning, do you think about where your water comes from?

Probably not, but some 100 people in Landis thought about water on Sunday, as they went on a “water walk” to raise awareness for Water Mission. The agency works to provide clean water in 10 countries throughout the world, mostly in Africa, Indonesia and Latin America.

“We had six congregations from four denominations come together to help those in need half a world away,” said the Rev. Jarrod Lanning, pastor of Trinity Lutheran Church, which sponsored the event.

Although most Americans take clean water for granted, the group, based in Charleston, S.C., shared the following statistics:

Lanning also noted that half of all childhood illnesses are water borne.

After he led a prayer, the group set off through Landis down to the Lake Corriher Wilderness Area to draw water — about a mile and a half from Trinity.

He also brought a water filtration system, set up in the back of a small trailer, to demonstrate how the process works. Water is filtered through three separate tanks, the first using alum, the second two using anthracite and garnet.

“It comes out totally clear, like what you’d get at a store,” he noted.

In the last step, a chlorinator makes the water safe to drink. The system can filter 10 gallons per minute and 10,000 gallons a day. Most of the systems are used long term in communities internationally, but these systems have been used in Columbia, S.C., after the flooding last fall, and after Hurricane Katrina in New Orleans, Herr said.

It costs anywhere from $30,000 to $200,000 to set up such a system, depending on the size of the project, Herr said. “It’s like setting up a mini water treatment plant in these communities.”

A half-dozen churches in the South Rowan community participated in the walk, as did CHAOS, a youth group from Trinity, St. Enoch, Ebenezer and Mount Moriah Lutheran churches housed at Trinity.

“This summer, our middle-schoolers are going to Charleston to help with Water Mission,” said Candice Carter, CHAOS director.

The event was simply to raise awareness about the need for clean water and the work of Water Mission, said organizer Judy Davis of Trinity. “Water is not a given in many places in the world. This is the first thing we’ve done to get the community involved.”

“It seemed interesting and I wanted to see what Water Mission was about,” said Jordan Cline, a sixth-grader at Salisbury Academy and member of Ebenezer. She’ll take her first mission trip this summer to Charleston.

“Candice told us about this and I just thought it would be fun,” she said.

She admitted she doesn’t think about where the water she uses each day comes from. In most developed areas, who does?

Some participants rode down to the creek across from the South Rowan Y to fill their water jugs. The water they drew was the color of ginger ale.

“If I was real thirsty, I would drink it,” said Thelma Corriher, a member of Mount Zion United Church of Christ. With Corriher at the creek were Bob Davis — Judy’s husband, along with Jerry Shapley and Joe Wright, also of Trinity.

When the group returned to church, they emptied their water jugs into the filtration system.

“It was amazing to see how dirty it was going in and how clean it comes out the faucet,” Anne Corriher said on Monday morning.

Corriher, a member of Mount Zion and executive director of Main Street Mission, has gone on several mission trips, but said she’d next like to work with Water Mission.

“It’s just a part of who I am,” she said of her mission work. “The essentials in life are water and food, and to me, mission work just goes hand in hand with what I do at Main Street Mission.”

“We’ve got a great community with big hearts,” Lanning said.

After the walk, the group enjoyed ice cream provided by Trinity members.